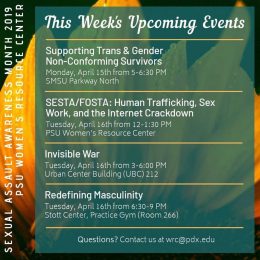 I saw the event Redefining Masculinity (April 16, 2019) listed in my local independent weekly. It said the panel discussion would be partially inspired by the documentary The Mask You Live In. I’d never heard of this film, so I found it on YouTube and watched a little of it.

The film opened with the story of a severely depressed ex-professional football player who had spent his life trying to win the love of his abusive father who wanted him to be tough. He never felt tough enough, not even after playing pro football, and had struggled through life as a result.

Next came a montage of contemporary boys, all sad and wounded, who’d been abused in different ways, by fathers, other males, and society in general. They were unable to express their emotional pain because of toxic male culture and the cruel “codes” of masculinity.

After that a questionable “expert” appeared, claiming that if you want to start a fight with a group of boys, ask them: “Who’s the sissy around here?” (yes, he actually used the S-word). This “expert” explained that there would immediately be arguments about who that is, i.e. the boys would turn on each other, and eventually give up one of their own. They would do this because of the dangerously “competitive” aspect of masculinity. (Boys are not capable of loyalty apparently.)

This was the first ten minutes of The Mask You Live In. The underlying message of this deeply biased and agenda-driven documentary seemed to be: the best way to deal with traditional masculinity would be to eliminate it.

The film was annoying enough to inspire me to go to the panel discussion. I wanted to see just how over-the-top the toxic masculinity would get. I also wanted to see one of these male professors stand up in front of a crowded room and openly denounce his gender.

The panel was held in the sports complex of the Portland State campus. I couldn’t find it at first but then spotted a woman standing outside a small basketball practice court and asked her if she knew were Redefining Masculinity was. She greeted me warmly and said it was right inside. She gave me some handouts and steered me through the door.

Inside, was a large table with Starbucks coffee and an impressive array of donuts. Several cheerful college girls were standing around. I was surprised how happy and bouncy everyone was. Weren’t we here to denounce the patriarchy? Why was everyone in such a good mood?

I got a donut and some coffee, and then joined an impressive crowd who were sitting on bleachers on one side of the basketball court. In front of us were seven men sitting at a long covered table. They looked like a tribunal. The demographics of the panel were: two black men, two Hispanic men, a native American man, a white gay man, and a man with slightly dark skin, who was most likely Muslim.

Before it began, the panelists each listed off their titles and credentials. They were all top-level academics, the heads of their departments, or the holders of important “chairs.” In short, they were Portland State’s best and brightest.

A young woman joined the men. She appeared to be a student. Or maybe just very young. She was the moderator. She immediately launched into a full minute of jargon-heavy, leftist University-speak. Sectionality, patriarchy, hegemony, binary . . . “we are here to engage in a dialogue” . . . “this is a necessary conversation, that we, as a community, need to engage in.”

Then she turned to the panel and asked her first question. It was a long question in dense liberal-ese. It literally made no sense. The 100 plus audience members, with their donuts and coffee, sat waiting for one of the men to talk. The poor men at the table, mostly looked back and forth at each other. Nobody had understood the question.

Then one of the black professors took the mike and told a story about his “pops.” It was about how his father taught him a life-lesson about something, I don’t remember what. It was a touching story though. He described driving around with his “pops” in the Arkansas town where he grew up. It sounded like he’d had a calm and pleasant childhood. It was heartwarming.

When he was done, another guy told a similar story. He and his dad, sharing knowledge. He ended it though by expressing how masculinity can be oppressive and problematic. This seemed to relieve the audience a little. The next guy did the same. A pattern was thus established: tell a story about your dad, or your brother, or your little league coach, but then add something about the dangers of masculinity. Or say: “we need to have a dialogue . . .”

The moderator asked another question and this time, the Native American guy went first. He too told an interesting story from his youth. Whenever he had to mention white people he called them “colonizers.” American society was “Colonizer Culture.” His story was about life on the reservation. He talked about his father and the men on the Lakota reservation. He said “As a Lakota Indian . . .” several times. The story itself was interesting and well told. It was something about an elder saying something humorous to him. But then he went right back to the problematic nature of living in the colonizer culture. Everyone nodded somberly.

Then the Hispanic guy talked. The panelists were mostly ignoring the moderator girl now. Thankfully, she was letting them go. The Hispanic guy talked about the hierarchical nature of the male culture in his ‘hood. During his youth, they had a special Spanish word for “top dog,” which he repeated several times. Everything centered around the top dog, and each group of younger guys had their own top dog. You had to be tough, and you had to stand up for your guys. It was very vivid, the description of this neighborhood. Everyone was impressed.

Meanwhile, the college kids sitting around me on the bleachers were genuinely enjoying themselves. Stray students would wander in, in the middle of a panelist’s story. The male students would high five their friends. The female students would gush and squeeze in with their classmates. People were on their phones, of course, checking things. There were two students in front of me who appeared to be boyfriend and girlfriend. They kept looking at each other for confirmation, whenever something potentially controversial was said.

The panel was hosted by the PSU Women’s Resource Center. I had expected it to be a dour group. I expected feminists and LGBQT types, troubled young men, maybe some older bitter adults, since it had been advertised to the public. In fact, it was kind of a party. All I could think was that since PSU is a bit of a backwater academically, everyone was just excited to be involved in the “new thing.” Now we were talking about men, which was maybe something different and exciting to these eighteen and nineteen-year-olds. Plus (and this was a big plus) the panelists were on a roll. They were telling good stories, saying funny things, making good points. The vibe among the students was: Fuck yeah, masculinity is something we need to talk about! Let’s have a dialogue and process how we feel about this!

For the last thirty minutes there were questions from the audience. One audience member asked how to deal with a coach who said things like “don’t be a pussy” or “man up” or “grow a pair”? Everyone agreed a coach should never use such demeaning language. The female moderator, interjected to explain to us how important language is (“words matter”), and how patriarchal language limits and oppresses us.

The other Hispanic guy answered the question. He told a story of being a college basketball player and getting a new coach who was older and from the south and who sometimes used the phrase “cotton pickin’” during practice. This phrase was hurtful to the black players on the team. The players had a private discussion about it, and processed their issues, and spoke truth to power. The basketball coach stopped using the offending phrase.

When the panel finally ended, barely anyone had left. I had really enjoyed myself. I especially liked the Lakota guy and his “colonizer” concept. And the black professors, with their fond recollections of their fathers. To me, this was proof that successful men of every race tend to have competent, responsible fathers. Which somewhat contradicted the idea of the panel which was that natural masculinity had to be altered, constrained or eliminated.

The other thought I had was: the reason the panelists were so funny and entertaining was because as academics, they never get to talk about themselves as men. What man doesn’t want to talk about that? In the course of redefining masculinity, these guys finally got to describe their own authentic experiences. And they got to do it in a safe space, officially sanctioned by the University, by the Women’s Resource Center no less! For that reason, everyone had a good time.