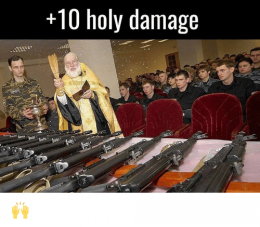 One thing which has been repeated throughout the Dissident Right to the point of becoming a truism is that in order for the West to be restored, we need to rediscover our religiosity. Religion is beneficial for many reasons, chiefly its skill at moderating the excesses of human behavior, providing structure and support to the various members of the community, lending God’s strength to the average man so he can face the daily challenges of life (especially exercising control over women), and act as an organizational entity. If we want to get shit done, getting the local padre to instruct the congregation in the utility and goodness of getting the excrement in question done is second to none, especially if you’re trying to organize white people who are traditionally hostile to outright coercion.

While there is zero doubt in my mind – and hopefully in yours – that we need a religion, perusing those which are on offer leaves us sorely dissatisfied. Let’s begin with the big one: the Catholic Church. It’s a shambles. Not only is the Curia under sodomite occupation and the churches themselves are sanctuaries for pedophiles, but the guy in Rome who ought wear the big hat (but wears a tiny Jew hat instead of his big hat) is a commie who licks the feet of negroes and sand people. Worse, he preaches Leftism and ruination while condemning healthy construction of walls.

Moving on, we’re presented with the legions of Protestant sects. The state of mainline Protestant Christianity is somewhere between catastrophic and cataclysmic – whether it’s whaman bishops, negro and immigrant worship, pro-sodomy fundraisers, or general proliferation of church hen values (gossiping, nagging, moralizing, shaming, and other womanries), these entities wearing the skins of old churches are decisively enemies of civilization and the white race.

Then we have fundamentalist Protestant Christianity which is at least vigorous and sincere, generally free of sodomites, generally not obsessed with non-whites and their importation into white lands, generally proscriptive of the most extreme forms of womanry (but not entirely resistant to the phenomenon in general), and not eager to please the ruling hegemony – in fact there’s something rebellious about being a fundamentalist Protestant in that you are the declared, identified, and hated enemy of Globohomo. Letting Jesus into your heart and loving your neighbor without stretching the definition of neighbor to include all brown people the world over marks you as a bad white in America. Unfortunately, fundamentalist Christianity in America is often marred with Jew-worship and lacking a friend-enemy distinction with regard to Globohomo. The fundamentalist is patriotic and is convinced that God loves America, even though the US government is the prime enforcer of Globohomo, that unholy alliance of Jews and inadequates that wants him dead, his sons castrated and wearing dresses, and his daughters as whores and playthings of the brown invaders. God bless his heart, he’ll faithfully enlist to be a golem for Globohomo, and will enforce Globohomo’s will with all the resolve of a righteous soldier of Christ. In this category, more or less, we find most Mormons, but without the martial spirit or vibrant culture of heartland America. And let’s not forget that Mormons are ethnically predominantly Yankee, and it shows in their anti-aesthetic disposition, even though those odious long skirts and practiced, used-faith salesman smiles cannot fully conceal the beauty conferred on a woman by Anglo genetics.

Which leaves our careful shopper with Orthodox Christianity as a faith which would revitalize the West.

Now, I won’t get into the nitty-gritty of Orthodox theology, mostly because I don’t fully understand the doctrinal differences between Orthodox and Western Christians. If you want insights into that, you should probably listen to Jay Dyer [2]. That being said, I don’t really put much stock into convoluted explanations of why God said x, and why x actually means y. As far as I’m concerned, being Orthodox is about partaking in Christmas, Easter, and other high holidays with your family and community in a general sense. But in the particular for myself, it means honoring St. Nicholas the Miracle Worker, Bishop of Myra – for whom I was named – as well as St. Demetrios of Salonika, Martyr of Christ, who is the patron saint of my family. It means gathering with your neighbors on Christmas Eve, and feasting on roast lamb come Easter. It means coming out on the day of Epiphany – the baptism of Christ – to see the young men of the town leap into a body of water to hunt for the cross thrown there by the local priest, or by the bishop or patriarch in the great cities. Orthodoxy means having icons of your venerated saints and the holy mother of God in your house, in your place of business, and in your car. It means lighting a candle in a heavily frescoed church for the living and the dead. It means having the priest sprinkling your AK-47 with holy water if need be (see above). It means standing in awe beneath painted ceilings and massive chandeliers. It means spending time in a monastery to rest from the noise of the secular world. It means walking through the great boulevards of cities when they’re cleared of vehicles on Good Saturday, on the eve of Easter, to greet the resurrection of Christ as a community. In short, Orthodoxy is very physical, and not at all cerebral, the way I know it. I first came to know it at the age of 1, in a baptistery. I don’t think about being a Christian, and I don’t even go to church outside of Easter – but it’s a very real thing.

More importantly, though, Orthodoxy and religion in general is a phenomenal way to practice politics in the Schmittean sense – to distinguish between friend and enemy. The Balkans in particular are problematic, since we’re a bunch of more or less white people hating on each other, unlike in the US, where your race is your uniform. Whether one is friend or foe is pretty much easy to deduce by looking at his car. If he’s got a cross or holy water suspended from the central rearview mirror, he’s Orthodox, and therefore a friend. If he’s got prayer beads, he’s probably Muslim, and therefore an enemy, or in one of a million case,s Catholic (which is to say, worse than a Muslim, hawk ptooey). The shape of our beards and other items of religious belonging are also useful in these distinctions. However, for the time being, it’s sufficient to signal belonging to the Church, and additional holiness doesn’t get you perks, unless you’re a bona-fide priest. This is probably because Schmittean friend-enemy distinctions are Boolean – you’re either friend or enemy. Churches and monasteries (and mosques) also serve as orientation tools. If I see a church in a village I don’t know, it’s friendly. If I see a mosque, it’s not. They’re also rallying points as cultural symbols, and a good means of measuring if equilibriums are stable or are moving towards destabilization – Balkan blood boils hot under the best of circumstances, but messing with our holy places gets you on the “genocide imminent” list.

All in all, sounds pretty good, right? So, whatcha waiting for, men of the West? As the bear said, Begome Ordodogs :DDDDDDD. 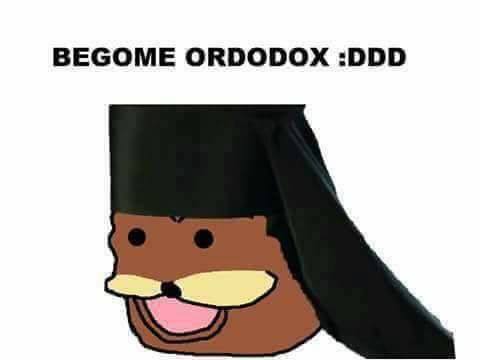 Well, I wouldn’t take the literal plunge into the baptistery just yet.

While I have quit a few orthobro friends who will maintain quite strongly that we are stronk, and the West decadent and weak, precisely because we’re Orthodox and the West is not, I can’t help but think that they have things backwards. What if the Catholic Church and Protestant churches are full of sodomites, sodomite-enablers, queef-sniffers, and queefers, because Western men have become a bunch of degenerate cucks, rather than the other way around? What if eating leavened communion bread is only incidental to ethnocentrism, and what if married and bearded priests aren’t the key to national confidence? I believe this because I see the seeds of Western-style cuckery in the Orthodox churches. Some priests have even taken to the Internet to loudly signal their allegiance to Globohomo, and thus curry favor with the progressive hegemony in Washington, or its stooges in Brussels, under the banner of Christian charity.

I guess this was to be expected. The various Orthodox churches have been the playthings of secular rulers ever since the Fall of Constantinople severed them from the temporal power of the Byzantine Emperors. In the Balkans, these people kept the Ottoman Sultan’s peace for five centuries, functioning as temporal rulers of the Ottoman millets. They were also servants of the Communist governments of Eastern Europe, and were thoroughly infiltrated by the commie secret services – the remnants of which still hold significant sway among the priesthood, as do they in other areas of life in Eastern Europe. And this is due to the fundamental problem of priesthood – the kind of man who becomes a priest, who chooses to become a priest, is in all probability a skinny-armed, feminine type, and if he isn’t, he isn’t happy in his priestly career. Most of a priest’s time will be spent in the company of old women, who are the most religious of demographic groups. Therefore, the kind of person who makes a good priest is the kind of person who can stomach, or – God forbid – enjoy the company of old women. Definitely not the kind of man with gravel in his guts and steel in his spine. Orthodox churches are therefore servile to secular governments, whatever that secular government is, and rarely condemn the leftward and westward drift of Eastern European countries – outside of Russia, where the government is, for the time being, pro-Russian.

It’s not all bad, though. This servility will ensure that once nationalists take power, they can use the Church towards nationalist ends without much fanfare. Unlike Protestants, who are prone to sectarianism and purity spirals, the Orthodox churches have national limits and frown on splitting off from the official church. Unlike Catholics, there is no uncontrollable, turbulent priest in Rome to vex upstanding kings, and one needn’t anoint a second nonce in a big hat to preside over Christendom from the holy city of . . . heh, Avignon.  No, the national limit of the Orthodox Church makes sure that the Synod is always within your grasp and sovereign will can be readily imposed upon them – dry-shaving in public optional (but strongly encouraged).

Ultimately, our future is in our hands, and the doctrines of the Church have precious little to do with it. It may be that Orthodoxy is indeed based and red-pilled, but without strong men to enforce these tenets of basedness and redpillianity, it is a hollow creed. The Church has its functions; I’ve enumerated some of them in this article, but reclaiming the West’s grandeur is a job for the Army of Christ. Yes, a blessing from the priest will give us 10+ Holy dmg and strengthen our resolve, but first we must take up the sword of truth and stand athwart the forces of evil, clothing our bodies in old-fashioned and folkish Christian courage.