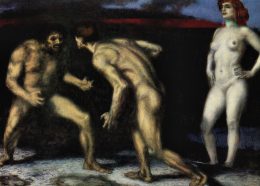 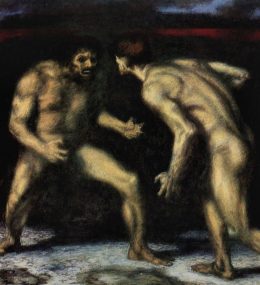 The banning of Chateau Heartiste, a.k.a. Chateau Roissy, the long-running manosphere blog, is a serious setback for white advocacy.

There’s a good deal of tension between the White Nationalist part of the Dissident Right and the pick-up artist section of the manosphere. Pick-up artistry is decried as degenerate and immoral, as well as an impediment to the reconstruction of white societies.

We are nevertheless allies in the fight against the progressive Left, insofar as both groups stand for a constituency which is named as an enemy of Diversity – whites and males. There’s also significant overlap between the groups – most White Nationalists are male, and most PUA men are white. However, Heartiste was more than your typical PUA.

Heartiste has been around for a long time in internet terms. His blog is devoted not just to teaching men game, as in the ability to pick up chicks, but also the ability to discern between women to be married or not, to differentiate between the various types of women, using such heuristics as her behavior and physiognomy – indeed, his comment sections were a treasure trove of experience with regard to female physiognomy. Heartiste was also adept at sussing out the character of males from their physiognomy. But his greatest contribution, in my opinion, was dread game – the art of keeping a woman once you’ve picked her up. You could call it the long game.

Briefly, dread game consists in keeping a woman in a constant state of mild to moderate dread of abandonment, which can be escalated if signs of disloyalty are detected. If the basic assumption of PUA, that women are hypergamous and submit to high-status, dominant men is taken as true, then what follows with regard to a successful marriage is that a woman must at all times perceive her husband as a high-status, dominant man. One indicator of male status are options and the lust of other women – many women want to be with Chad Thundercock. Dread game consists of convincing your woman, by hook or crook, that you are Chad Thundercock and that her position as your main squeeze is not secure. A woman who smells that your sexual options are limited to her and your hand is a woman who will eviscerate you, drain you of all resources, and cuckold you with Chad Thundercock.

If this sounds tough and nigh impossible, it is because it is tough and nigh impossible, chiefly for the reason that you’re in all probability not Chad Thundercock. There’s really nothing wrong with not being Chad. Alphas are few and far between, and a society consisting entirely of alphas would probably descend into constant war of all against all as the various Chads escalate their status grabs. At some point, you’re just sick of it all, and you want to be left to your private peace, so you kiss whosever’s ring and go home. That’s beta. Submission, even to an overwhelming force one’d be insane to challenge, is inherently beta, and women hate betas.

However, in olden times, the Chads needed the betas to work and fight for them. There’s also the fact that a Chad who monopolizes the females will quickly earn himself a knife in the back, courtesy of a horny beta, or find himself surrounded by 10 betas armed with spears, or get decapitated in his sleep by those same betas. So the Chads refrained from throwing their weight around and even created institutions that loaned Chadhood to betas – these being the official state and church sanction of marriage and punishment of female adultery, both secular and religious. In return, the betas kept king Chad’s peace. Dread game back then was as easy as reminding your wife that stepping out meant death, and not necessarily by your hand, but very public death and shaming at the hands of both secular and religious authorities.

Life is tougher today. Not only do you have to be the supreme alpha of your wife’s existence, you’re not even competing with just your garden-variety Chads. Hulking though their biceps may be, they’re little children when compared to the ultimate Chad – big daddy government.

There’s no way to be more alpha than the government. Status grabs against the government are categorized as ‘crime’ and punished with overwhelming force. You can’t command bigger wads of cash or vaster armies of men than the government. They take your lunch money and call it taxes. They tread on you, and you love it. It’s not the nanny state – it’s the pot-bellied, bearded 1% biker state.

Their media signaling tells your woman to reject you and become a strahng, independant whaman who don’t need no man, which essentially means a wife of the state – at best working some dead-end make-work office job while her ovaries wither away, at worst birthing a cohort of thieves and whores as a single mother – a concubine of great esteem in the vast harem of big daddy government.

We can, of course, complain, but complaining is beta. Complaining is evidence not just of having to suffer indignities (a marker of low status if there ever was one), but also of inability to take it. I suspect that’s why libertarians usually can’t get laid: if you whine about the government all day, people think of you as a whiny bitch, which is never a good look on a man.

Now, the Chad thing to do would be to resist the government and the ruling class in general, but the ruling class doesn’t really like that, so it squishes you like a bug. For all the women they’ve bedded, Heartiste couldn’t protect his blog from WordPress, and Roosh V couldn’t protect his books from Amazon. Opposing the official policies of the government and the will of Globohomo is very Chad, but marks you for destruction. Violent resistance against Globohomo gets you killed or imprisoned.

While bearing this in mind, we are supposed to practice dread game and be the dominant alpha in our women’s lives. It’s tough, but not impossible. The thing about Globohomo is, it’s big, but it can’t be everywhere. As in military matters, all it really takes is local superiority, whether numerical, material, or tactical, which is to say, be the biggest Chad on your two square feet, even if Globohomo bestrides the world like a colossus.

We have the upper hand in the tactical realm as we have maximum proximity to our wives and we can take care to be bigger Chads than any representative of the government or the broader Globohomo to them. If your wife works, make sure to have bigger biceps than her boss and to act more decisively than him. Ideally, she works for you, in your business, or her primary occupation is the raising of your children and maintenance of your home.

You must also learn to do the right thing despite your wife’s protestations – limiting her access to a circle of hens who gossip and compete to be the biggest whore is essential – or in other words, make sure she has no single friends. If you can’t afford to move out to the country, where there are fewer single women roaming the streets, this can be done by charming her friends without closing the deal. Worst case scenario – the single friend argues with your woman over how big of a dick you are, and your woman is a bit sore for several days, but develops abandonment dread in her. This will bring complaints that you’re “too controlling.” This is what’s known as a shit test – womanly bullshit to test your resolve. Do not get defensive, but rather rebuff the woman. My favorite response is a variation on “you’d crash and burn without my control.” But you can never fully control your woman in this way in the modern world. In the olden days, the king and bishop were on your side. Today’s faceless bureaucrats and media moguls are 100% against you. And even the biggest Chads cannot guarantee constant success against the full power of the government and media.

If you are on the Dissident Right, expect the women in your life to stab you in the back and betray you for Globohomo. You can have a good deal of control and project good enough dominance over your wife or girlfriend, but you’re quite open for betrayal by your female relatives or . . . heh, friends. They will side with the state, unless they are themselves under the influence of dominant men, and even then it’s just a matter of those men blinking for a second. If your female relatives are single or divorced, expect them to side with Globohomo over you. Suspect even your mother – hypergamy teaches us that a woman will fully endorse the murder of her children if it means access to the supreme Chad.

Does this mean that we retreat into the woods, build treehouses, and stick giant “No Gurls Allowd” signs on them, forming Männerbunds to fight the good fight and collectively reclaim our right to reproduce? Well, we’re already doing that. The woods are the internet, the treehouses are the various platforms, and we’re actually in possession of a far more potent woman-repellant than a “No Gurls Allowd” sign, which is to say dissident politics. The mere mention of our various tenets terrifies women because to be a Dissident Rightist is to counter-signal the supreme Chad Globohomo. And here we are in the Männerbund, girding ourselves for battle, hashing out the various ways in which we can survive and fight back. But we still want women, and more than women, we want wives.

The first line of defense is not to include women in politics. This means to stop bellyaching about “women in the movement.” Women are fickle and back the strongest side. First we win, then we get the women. Likewise, do not fall for the charms of online women who are ostensibly “based and redpilled.” Even if they are, they’ll squirm the moment they feel vulnerable, and we don’t, at the moment, have the power to protect them. Above all, do not involve women in real-life political activism where you risk being exposed as beta to the state and Globohomo. Fighting and losing is manly, and a woman will forgive, but being made to kiss the ring, as is for example the case in most democratic politics, that’s degrading and unforgivable.

Keep in mind, however, that you can only keep the political and personal apart for so long, because the personal is the political, and especially if you’re a white man seeking to get married and make babies – the state is directly interested in denying you that path in life. Expect the knife in the back, prepare for it, steel your heart as much as can be steeled, and let your resolve not waver. Even if you’re Chad Thundercock, especially if you’re Chad Thundercock, because the Globohomo is particularly interested in tearing down Chad Thundercock.

Tonight, I’ll hold my wife in my arms, and I’ll kiss her. And she’ll go limp with submission when she feels herself physically overpowered. I’ll be her golden prince, and she’ll know the joy of a woman completely owned by a powerful man, for I have, for the time being, convinced her that I am a lion beloved of God. And I’ll love her until the stars fall out of the sky.

But at the back of my mind there’ll be that demon which is equal parts jadedness and naïveté: the knowledge that even the slightest misstep, the tiniest atom of weakness shown can send her down the path of betrayal. I guess that lies at the heart of the terrible tragedy of being a man in the modern world – that you have regard with suspicion the woman you love.