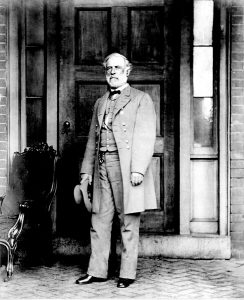 President Donald Trump he called Lee a “great general” last week, igniting another controversy in the process. He praised Lee while trying to defend his famous Charlottesville response.

“A funny thing to do would be dig up Robert E Lee’s corpse and soccer juggle his head. It would get more views than just a normal soccer ball,” tweeted liberal cartoonist Matt Bors.

That sentiments represent the elite consensus on the legendary Confederate general. Lee is no longer the honorable tactical genius who helped unite a war-torn America. He’s now a racist, a traitor, a brute, and a bad general. Statues of him have been torn down and the ones that remain are eyed for termination. Even the university that bears his name, Washington and Lee University in Virginia, has tried to distance itself from him.

This argument that Lee should no longer be honored was characteristically articulated by The Atlantic’s Adam Serwer. Serwer argues Lee cruelly treated his slaves, upheld white supremacy, refused to properly treat black Union soldiers, encouraged white resistance to Reconstruction, and committed himself to a fatal strategic error in the Civil War.

“To describe this man as an American hero requires ignoring the immense suffering for which he was personally responsible, both on and off the battlefield,” Serwer wrote. “It requires ignoring his participation in the industry of human bondage, his betrayal of his country in defense of that institution, the battlefields scattered with the lifeless bodies of men who followed his orders and those they killed, his hostility toward the rights of the freedmen and his indifference to his own students waging a campaign of terror against the newly emancipated. It requires reducing the sum of human virtue to a sense of decorum and the ability to convey gravitas in a gray uniform.”

Lee should not be honored at all, according to this assessment. This new interpretation is contrary to America’s historic tradition. Reconciliation between the North and the South needed figures who could bridge the divide. Lee, a devout Christian and archetypal gentleman, was the perfect figure. He was the South’s greatest general, and a man Yankees could admire and respect. Statues were built to him not only to honor Southern heritage, but to uphold our nation’s reconciliation. Monuments to Lee were found throughout America, and the nation’s founding stock adopted him as a popular hero.

Lee and other Confederate symbols and figures have recently faced erasure. The new America no longer wants to uphold reconciliation. It wants to emphasize the South’s humiliation. All Confederates were traitors and their symbols and heroes should be driven into the dust. Our new nation will only honor Union soldiers, freedmen, and radical Republicans.

America came to a “racist” understanding after the war. As historian David Blight critically notes in Race and Reunion, Yankees and Rebels found common ground as white Christians to forge a unifying national identity. Both North and South agreed America was a white man’s country.

America is no longer the same country. Mass immigration has changed the very fabric of the country, and far fewer Americans can claim Civil War ancestry. America then was predominately white, Protestant, and Northern European. The average American of 1870 could see himself in Robert E. Lee. The Somali refugee can’t.

As the old America is rapidly replaced, so our its heroes and history. A new view of the Civil War is demanded and it must be “anti-racist.”

“The anti-racist narrative outlines a narrative emphasizing the malignancy of slavery, the obduracy of the slave-owning class in defending its privileges, the attempt to build a multiracial democracy during Reconstruction, and the brutality of the terrorist campaign that destroyed Reconstruction and led to the entrenchment of Jim Crow,” writes Jeet Heer of The New Republic.

The old narrative of honorable white men fighting and then reconciling is racist. Only one side had very fine people. The other side were evil white supremacists and the worst traitors in human history. The goal is to force Southerners to emulate post-World War II Germans. Their ancestors deserve only scorn, they should feel only shame about their heritage, and their historical mission is an eternal apology.

The difference between Germans and Southerners is that the South has not imbibed the guilt its supposed to have. Confederate flags still fly everywhere, the majority of Southerners want Confederate monuments to remain, and Robert E. Lee is still considered a hero. Most Southerners do not have ancestral guilt over the Confederacy. They still uphold the reconciliationist view, and no amount of journo lecturing can change that.

Not that there has been no change. Southern states like South Carolina have taken down the Confederate flag from state grounds. Monuments have been removed from cities, such as New Orleans and Memphis, where white Southerners are no longer a majority. But, by and large, the South does not have the monuments to humiliation that liberal elites want.

While most Southerners honor their ancestors, the new Americans try to appropriate the Union as “their side”–even though their families were not in America during the Civil War. Leftists will insist Union soldiers were just like them because the Yanks were immigrants and fought against white supremacists. Left unmentioned is that those immigrant soldiers were often just as “racist” as the rebels. Several Union states had black exclusion laws. Nineteen of 24 Northern states didn’t allow blacks to vote by the end of the war. Irish immigrants targeted blacks in the New York Draft Riots and strongly supported “white supremacist” politicians and policies. Abraham Lincoln himself did not believe in racial equality and still supported black repatriation in his final years.

Northerners feared slavery’s expansion not because of racial egalitarianism, but because of its threat to free white citizens. “We want the [the territories] to be homes for free white citizens,” Lincoln said prior to his election. Lincoln and other Northern leaders repeatedly emphasized that the war was not fought for racial equality, but to preserve the Union. Few Northerners championed the idea that tens thousands of white soldiers died to free slaves.[1] Modern Leftists claim the opposite.

Elites often takes a contradictory approach to American history. The Founding Fathers are both racists and anti-racist egalitarians, depending on which opinion needs to be upheld. The same will be done for the Union. When Confederate monuments need to be torn down, we’ll be told the rebels were defeated by scrappy immigrants who believed all men were created equal. When we need to be told America was founded on white supremacy, we’ll be informed of Lincoln’s racial views.

Lincoln, like the Founders, will be kept as a hero with an asterisk. Lee will be consigned to the dustbin. There’s nothing General Lee represents that the New America wishes to remember–whether it is honor, conservative Christianity, loyalty to family and place, or race realism.

The vilification of Confederates is a result of white America’s dispossession. No amount of conservative lectures about “remembering history” will convince Guatemalans and Nigerians to honor dead white men. The only way to save the statues is through the triumph of white racial consciousness.

[1] Paul D. Escott. “What Shall We Do With The Negro?”: Lincoln, White Racism, and Civil War America.

» Populism & Neo-Thatcherism:
Why Economics is Crucial for the Dissident Right