Everyone felt it. The 2019 American Renaissance Conference had a palpable sense of forward movement. The 2018 conference took place at a time when the movement needed (and got) a success. This year, the mood was optimistic, energetic, and eager. The movement—more mature, disciplined, and serious than ever—is unquestionably on the march.

The usual gaggle of protesters showed up, tightly controlled by Tennessee law enforcement, though in another example of anarcho-tyranny, several covered their faces in defiance of the law. “Hey Nazis, remember Stalingrad?” read one sign. Clearly, they don’t remember the gulags, Pol Pot, and mass starvation. Demonstrators tried to harass conferees driving into the park—four were arrested on charges of disorderly conduct and assault—but they were held at a distance from the conference and were even more irrelevant than usual. (Extended raw footage of demonstrators and police, including mounted officers, can be seen here. There is an interesting arrest sequence about 14 minutes from the end.)

Patrick Casey, leader of the American Identity Movement, was the first speaker, and warned of the “specter” of Woke Capital. Powerful financial institutions support Left-wing causes, particularly mass immigration. The mainstream conservative movement has been slow to recognize that “capital is not a friend to America.” Meanwhile, the Left has redefined “oppression” in racial and cultural rather than economic terms, essentially justifying collaboration with big business. Big Tech, banks, and media conglomerates coddle socialists as they persecute identitarians. Mr. Casey argued that capital is actively driving Leftist trends, mostly out of “sinister and cynical” self-interest. He argued for activism and education to overcome the “false consciousness” promoted by a corrupt, globalist ruling class, and ended with a fiery call for a new elite. 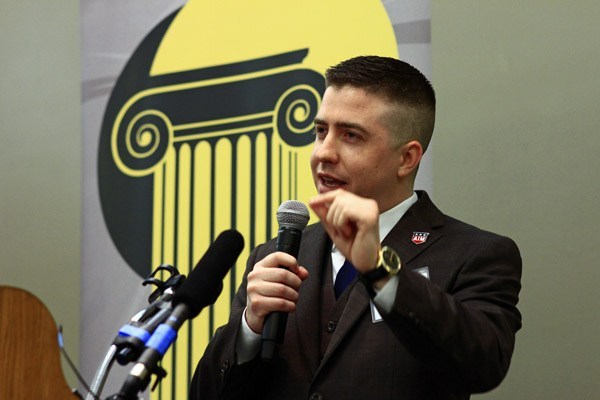 Well-known novelist and cultural commentator John Derbyshire explained his concept of an “Arctic Alliance” between Asians and whites. He said these groups have in common a high mean IQ and low fertility rates, which could lead to a common strategy against the “demographic” and “dysgenic” threat posed by mass immigration. Mr. Derbyshire raised and then refuted several objections to his plan. These ranged from questions of terminology and feasibility to larger issues about whether Asians will follow whites down the path of self-hatred. He wondered whether ethnomasochism is unique to whites or is “the inevitable result of post-industrial society.” He argued that the purpose of groups like American Renaissance is to resist dispossession and to build a defensive strategy of “Arctic peoples” that can ensure the survival of civilization. 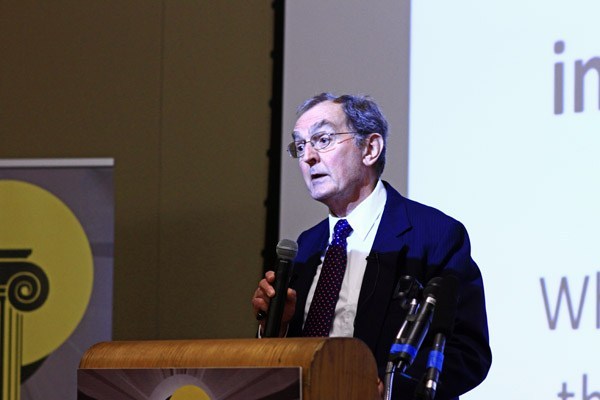 Jean-Yves Le Gallou, one of the founders of the influential European New Right organization GRECE, former member of the European Parliament, and founder of ILIADE, described the origins of the European people and the geopolitical divisions in Europe today. He noted that all Europeans derive from common ancestors 5,000 years ago, and that Europe’s population remained essentially unchanged until the middle of the last century. 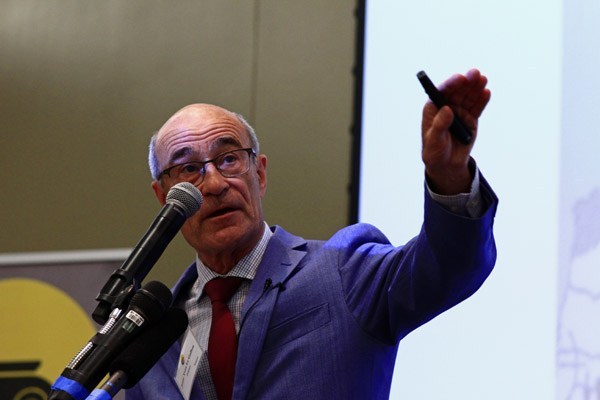 Mr. Le Gallou divided Europe into the three areas: Invaded Europe, Threatened Europe, and Resisting Europe. Nations in the first category are quickly becoming majority non-European, and he traced the “Great Replacement” to postwar guilt and the ideology of “human rights,” which leads to the absurd doctrine that “every person is supposed to be replaceable.” He concluded with Dominque Venner’s prophecy that the current struggle is an opportunity for Europeans to be “reborn and find themselves again.” He finished with a deeply inspiring European identity video produced by ILIADE.

Jared Taylor’s short answer to “why we are winning” was “because we’re right and our opponents are wrong.” His longer answer included the fact that most Americans no longer trust the mainstream media or the federal government, both of which oppose our racial interests. The message that “we have the right to be us and only we can be us” is spreading, despite obstacles such as deplatforming. Mr. Taylor noted that white advocates are the only group who challenge the ruling class, which scarcely notices even the most radical Communists or anarchists. Mr. Taylor noted that at least some academics are beginning to take white identity politics seriously and fairly, and are citing polls that show 30 to 40 percent of whites take their racial identity seriously. 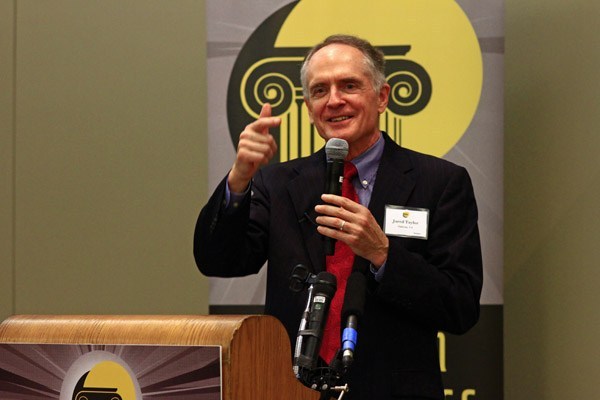 Mr. Taylor described very encouraging political trends in Europe, where new, identitarian parties are springing up to represent rising racial consciousness. He also praised the high quality of the able, committed people now joining the movement, calling today’s young activists a deeply heartening sign for the future. Finally, he said that because the Left has “made everything racial,” whites, too, are forced to think in racial terms, which will encourage them to see that they must determine their own fate. He concluded with a declaration of faith that there will someday be a place on this continent “that is exclusively ours.”

John Morgan analyzed the rise of Hungarian prime minister Viktor Orbán, calling him a “beacon of hope” for defenders of Western Civilization. Mr. Morgan began by explaining the historical circumstances that created a Hungarian identity defined by defiance and resistance to outsiders. He noted that the governing Fidesz party moved from center-Right to populist-Right in response to the migration crisis, and now wins elections by opposing mass immigration, the European Union, and the George Soros empire. Mr. Morgan emphasized that Hungary proves mass immigration can be stopped. Mr. Orbán is also promoting natalist policies to ensure the continuity of the Hungarian people. 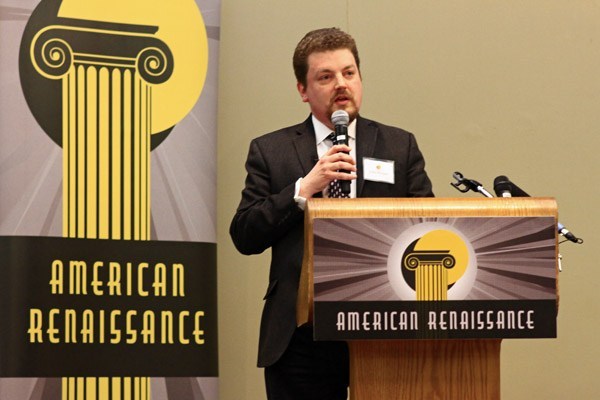 Hungary proves that resistance is possible, and that a small, East European country can have an outsized influence on the continent and the world, but Mr. Morgan argued that Hungary cannot fight alone indefinitely. The forthcoming European Parliamentary elections are critical, and ultimately nationalists must take power in other countries and govern as Mr. Orbán does.

Lana Lokteff of Red Ice began with a clown horn—but delivered a philosophically grounded speech that drew on Oswald Spengler, Joseph Campbell, and Carl Jung. She noted that the popular meme of “Clown World” harks back to the archetypal European character of the fool, who can speak forbidden truths and embrace chaos rather than vainly trying to resist it. She argued that the West is at the end of an inevitable historical cycle, and that mockery is the best weapon for those who want to speed the end of this destructive phase. By mocking the present elite, white advocates can hasten the coming of a new order that is in harmony with human nature. 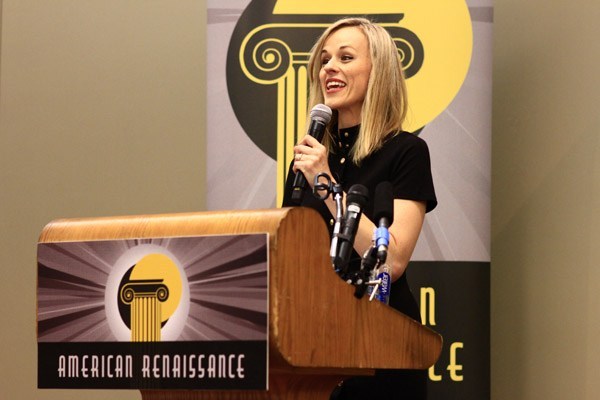 The charismatic young activist James Allsup delivered an after-dinner address that was both inspiring and practical. He criticized President Trump’s betrayals on immigration, but also credited Mr. Trump’s 2016 campaign with invigorating young activists who have become the backbone of white advocacy. Mr. Allsup condemned the neoliberal elite that is destroying America’s identity and quality of life by importing migrants. For this elite, migrants reduce wages and swell the ranks of consumers. In response, Mr. Allsup called for local, face-to-face community-building and support networks, saying that whites have the opportunity to construct a nation from within this crumbling empire and create a true “American Renaissance.” 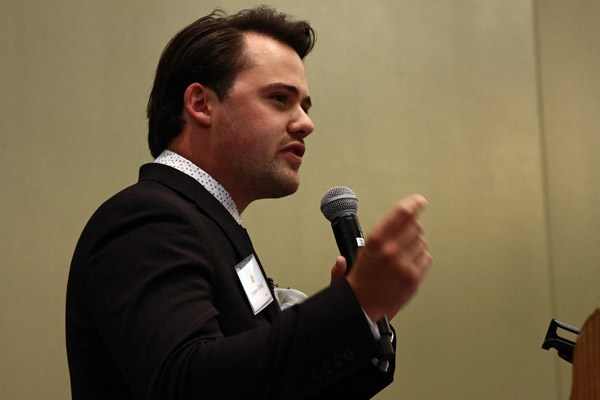 Sam Dickson offered his usual valedictory address. He argued that many of our opponents are consciously lying, selectively applying the law, and falsely linking white advocates to violence. Our rulers aggressively prosecute the Rise Above Movement while they let antifa crimes go unpunished. Black Lives Matter has never been held accountable for the murders of police officers by activists linked to their movement, but white advocates are held collectively responsible for atrocities like the recent New Zealand shooting. Mr. Dickson argued it is instead the “crusade for equality” that is vastly more likely to lead to deaths, such as the Katyn massacre, the Cambodian killing fields, and the mass suicide/murders inspired by the egalitarian American pastor Jim Jones. Mr. Dickson encouraged the audience to have faith in the moral righteousness of our cause, to take pride in our identity, and to pursue excellence rather than equality. 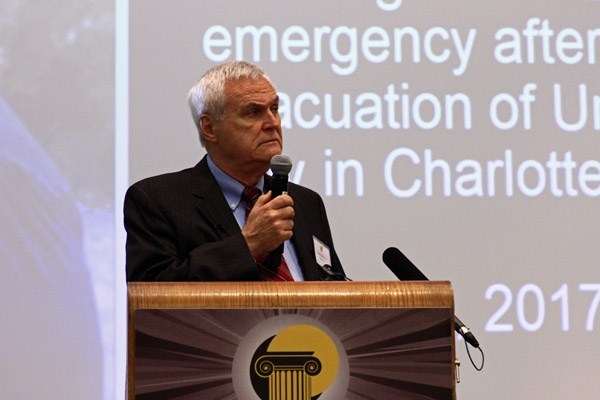 The conference was yet another resounding success. Local television even covered it in a reasonably even-handed way.

We are deeply grateful to the staff of the Montgomery Bell State Park, the law enforcement officers who ensured public safety, and the attendees, all of whom conducted themselves with decorum and good cheer.

Our cause is advancing. If we take to heart the message of this weekend, our victory is inevitable. The truth is on our side.

We look forward to seeing you next year.

Mr. Hood is a staff writer for American Renaissance. He has been active in conservative groups in the US.

The above article was reprinted from American Renaissance.