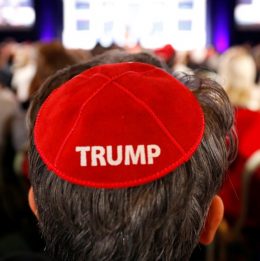 “Unlike other presidents, I keep my promises,” Trump boasted in a speech delivered on Saturday to the Republican Jewish Congress at a luxury hotel in Las Vegas. Many in the audience wore red yarmulkes emblazoned with his name. In his speech, Trump condemned Democrats for allowing “the terrible scourge of anti-Semitism to take root in their party” and emphasized his loyalty to Israel.

Trump has kept some of his promises. So far, he has kept every promise that he made to the Jewish community. Yet he has reneged on his promises to white America – the promises that got him elected in the first place. It is a betrayal of the highest order: millions of white Americans placed their hopes in Trump and wholeheartedly believed that he would be the one to make America great again. They were willing to endure social ostracism and imperil their livelihoods by supporting him. In return, Trump has turned his back on them and rendered his promises void.

The most recent example of this is Trump’s failure to keep his promise to close the border. On March 29, Trump threatened to close the border if Mexico did not stop all illegal immigration into the US. This would likely have been a highly effective measure given Mexico’s dependence on cross-border trade. Five days later, he suddenly retracted this threat and said that he would give Mexico a “one-year warning” before taking drastic action. He further claimed that closing the border would not be necessary and that he planned to establish a twenty-five percent tariff on cars entering the US instead.

Trump’s failure here is his alone. Closing the border could be accomplished with a simple executive order. It has happened before: Reagan ordered the closing of the border when DEA agent Enrique “Kiki” Camarena was murdered on assignment in Mexico in 1985, for instance.

Trump’s empty threats over the past two years have had real-world consequences, prompting waves of migrants trying to sneak into the country while they still have the chance. His recent move to cut all foreign aid to Guatemala, Honduras, and El Salvador is another empty gesture that will probably have similar consequences. The funds directed to those countries were used for programs that provided citizens with incentives not to migrate elsewhere. (The situation was not ideal from an isolationist point of view, but a wiser man would have built the wall before cutting off the aid.)

The past two years have seen a surge in illegal immigration without precedent in the past decade. Since late December, the Department of Homeland Security has released 125,565 illegal aliens into the country. In the past two weeks alone, 6,000 have been admitted. According to current projections, 2019 will witness around 500,000 to 775,000 border crossings. Additionally, about 630,000 illegal aliens will be added to the population after having overstayed their visas. By the end of the year, more than one million illegal aliens will have been added to the population:

These projections put the number of illegal aliens added to the U.S. population at around one to 1.5 million, on top of the 11 to 22 million illegal aliens who are already living across the country. This finding does not factor in the illegal aliens who will be deported, die over the next year, or leave the U.S. of their own will. As DHS data has revealed, once border crossers and illegal aliens are released into the country, the overwhelming majority are never deported.

In February, Trump signed a bill allowing the DHS secretary to add another 69,320 spots to the current H-2B cap of 66,000. On March 29, DHS began this process by announcing that it would issue an additional 30,000 H-2B visas this year. The H-2B visa program allows foreign workers to come to the US and work in non-agricultural occupations. Unlike the H-1B program, a Bachelor’s degree is not required; most H-2B workers are employed in construction, maintenance, landscaping, and so on. The demographic most affected by the expansion of the H-2B program will be unemployed working-class Americans. This flies in the face of Trump’s promise to protect American workers and stop importing foreigners.

Trump has indicated that he has plans to expand the H-1B visa program as well. “We want to encourage talented and highly skilled people to pursue career options in the U.S.,” he said in a tweet in January.

Trump’s betrayal of American workers is perhaps best encapsulated by the fact that one of the members of the advisory board of his National Council for the American Worker (which claims to “enhance employment opportunities for Americans of all ages”) is the CEO of IBM, a company that has expressed a preference for F-1 and H-1B visa holders in its job postings.

Trump has been working on legal immigration with Jared Kushner, who has quietly been crafting a plan to grant citizenship to more “low- and high-skilled workers, as well as permanent and temporary workers” (so, just about everyone). Kushner’s plan proves the folly of the typical Republican line that legal immigration is fine and that only illegal immigration should be opposed. Under his plan, thousands of illegal aliens will become “legal” with the stroke of a pen.

There is a paucity of anti-immigration hardliners in Trump’s inner circle (though Stephen Miller is a notable exception). Trump has surrounded himself with moderates: the Kushners, Mick Mulvaney, Alex Acosta, and others. There are more former Goldman Sachs employees in the Trump White House than in the Obama and Bush administrations combined.

The new DHS secretary, Kevin McAleenan, who was appointed yesterday following Kirstjen Nielsen’s resignation, is a middle-of-the-road law enforcement official who served under Obama and Bush and is responsible for the revival of the “catch-and-release” policy, whereby illegal aliens are released upon being apprehended. It was reported last week that Trump was thinking of appointing either Kris Kobach or Ken Cuccinelli to a position of prominence (as an “immigration czar”), but this appears to have been another lie.

Trump’s failure to deliver on his promises cannot be chalked up to congressional obstruction. Congress. As Kobach said in a recent interview, “It’s not like we’re powerless and it’s not like we have to wait for Congress to do something. . . . No, we can actually solve the immediate crisis without Congress acting.” Solving the border crisis would simply demand “leadership in the executive branch willing to act decisively.” Kobach recently outlined an intelligent three-point plan that Trump could implement:

It would not be all that difficult for Trump to implement these proposals. Kobach still has faith in Trump, but his assessment of him appears increasingly to be too generous. It is hard to escape the conclusion that Trump is not actually interested in curbing immigration and reversing America’s demographic decline. He is a con artist and a coward who is willing to betray millions of white Americans so that he can remain in the good graces of establishment neoconservatives. At the same time, he wants to maintain the illusion that he cares about his base. As Ann Coulter has put it, “He’s like a waiter who compliments us for ordering the hamburger, but keeps bringing us fish. The hamburger is our signature dish, juicy and grilled to perfection, you’ve made a brilliant choice . . . now here’s your salmon.” Nearly everything Trump has done in the name of restricting immigration has turned out to be an empty gesture and mere theatrics: threatening to close the border, offering protections to “Dreamers” in exchange for funding for the ever-elusive wall, threatening to end the “anchor baby” phenomenon with an executive order (which never came to pass), cutting off aid to Central American countries, claiming that he will appoint an “immigration czar” (and then proceeding to appoint McAleenan instead of Kobach as DHS secretary), and on and on.

While Trump has failed to keep the promises that got him elected, he has fulfilled a number of major promises that he made to Israel and the Jewish community.

First, he moved the American embassy from Tel Aviv to Jerusalem. Trump claimed that the move would only cost $200,000, but in reality it will end up being more than $20 million. The construction of the embassy also led to a series of bloody protests; it is located in East Jerusalem, which is generally acknowledged to be Palestinian territory.

Second, he pulled the US out of the Iran nuclear deal. Netanyahu claimed on Israeli TV that Israel was responsible for convincing him to exit the deal and reimpose sanctions on Iran. (Both Trump and Netanyahu falsely alleged that Iran lied about the extent of its nuclear program; meanwhile, Israel’s large arsenal of chemical and biological weapons has escaped mention.)

Third, he put an end to American funding for Palestinians. This coincided with the passing of a bill that codified a $38 billion, ten-year foreign aid package for Israel. Trump also authorized an act allocating an additional $550 million toward US-Israel missile and tunnel defense cooperation.

Trump’s track record on Israel shows that he is capable of exercising agency and getting things done. But he has failed to address the most pressing issue that America currently faces: mass immigration and the displacement of white Americans. The most credible explanation for his incompetence is that he has no intention of delivering on his promises. There is no “Plan,” no 4-D chess game. The sooner white Americans realize this, the better.