Video of the Day
A Recently Rediscovered Speech by Jonathan Bowden!
The Essence of the Right 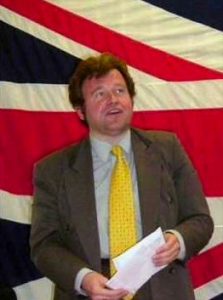 A long-lost video of a speech that Jonathan Bowden delivered to a meeting of the British National Party in Thringstone, Leicestershire on March 12, 2010 was recently unearthed and given to our friends at the Scandza Forum. We are also presenting it here on the occasion of what would have been his 57th birthday, on April 12. In this talk, Bowden attempts to distill the reasons why people become Rightists in the contemporary world — what it is that we oppose and fight for — and the increasing lack of choice among the mainstream political parties, and predicts the rise of populism that would begin to sweep across the West several years later. It is just as timely and inspiring now as it was in 2010. Enjoy!