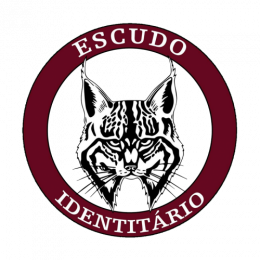 A while ago Guillaume Durocher did an interview with Erkenbrand to introduce them to a wider audience, and to promote their 2018 conference. Today I want to likewise honor a Portuguese organization I recently discovered. They are called Escudo Identitário, or Identitarian Shield. I was very encouraged to see that Rightist ideas are spreading to the Iberian Peninsula, a region that has been a Leftist bulwark since the mid-1970s.

Éordred: So the “Identitário” part of your name, is that inspired by the identitarian movement? Where did Escudo come from, what are its origins, and where does it stand ideologically?

Escudo Identitário: We don’t have any official links to any identitarian group, but we consider ourselves followers of the identitarian ideology, and we support every identitarian initiative in Europe. Escudo was formed in 2017 after a Communist-affiliated student’s union at the Nova University of Social Studies (FCSH) decided to crack down on a conference about colonial history that had been organized by another patriotic group. After hearing about the crackdown, a lot of young men who had intended to attend the conference started communicating online and decided to take counter-action. We stormed the university, confronted the student’s union, and delivered a protest letter to the Dean. At the time, this made a lot of noise in the press and, without even bothering to check the facts, both the Portuguese Parliament and the President condemned our action for being violent.

After the action, we decided not only to keep in touch but to start something new. We wanted to build an identitarian movement from scratch, which would have the capability of intervening on short notice whenever Leftists interfere with freedom of speech. Our ideological starting point was in traditional Portuguese nationalism, but over the last few months it started evolving into something new. We started borrowing a lot of ideas from the French New Right, especially the works of Guillaume Faye. Counter-Currents has been inspirational as well, as are ideas from many other movements of a traditionalist and reactionary stripe. Currently, we have our own variant of identitarianism that we call “Escudismo.”

Escudismo is not only a Portuguese identitarian worldview, but it is also a way of being and behaving in this ever-changing world of ours. We have some articles, in Portuguese, on our Website, describing this new concept of ours, although the full manifesto is not yet finished. Our symbol is the Portuguese Lynx, which is currently threatened with extinction.

Éordred: Is there rising nationalist sentiment in Portugal? What does the landscape of the parties and movements on the Right look like? Are there populists? Do you have any alternative media on your side?

Escudo Identitário: Nationalist and populist sentiments are definitely growing here in Portugal, but the vast majority of people vote far Left to center Left. This is a legacy of Salazar. People are getting more and more fed up with the current system, and most have already figured out that there is a demographic replacement taking place. But as is generally known, politics follows culture, but only with some lag, and right now, Portuguese politics has not yet caught up with these “new” sentiments. At the moment, not one political party has assumed an identitarian position. We are going to have elections this year, and unless something changes, it’s going to be business as usual. Some left-of-center party will win, and the status quo will remain. We will have to wait until 2023 for some serious change in the political landscape.

At the moment, there is virtually no alternative media in Portugal, apart from some very small Instagram accounts or Facebook pages which mostly reshare content made by others in the international alternative media.

Éordred: I know a little bit about Iberia, but not much, beyond the fact that it is in poverty, that it has been strongly Leftist since the fall of Franco and Salazar, and that the European Union has done it little good economically and culturally. Can you describe the socioeconomic and political situation in Portugal, and how you see your role in it?

Escudo Identitário: The Left’s hegemony began during the time of Salazar. We can’t bury our heads in the sand and pretend that the revolution against the regime he established – the Estado Novo – on April 25, 1974 came out of nowhere. The nationalists were so comfortable in the Estado Novo that, not only did they fail to reinvent themselves and adjust to the times, but they didn’t even understand that there was a culture war going on.

Ever since, the Left has basically dominated – not only the political landscape, but also the cultural. The EU, despite having some positive aspects for us, such as forcing our country to accept the new reality that we are no longer a maritime empire and that our focus should be on Europe, also exerted some very bad influences, especially when it comes to the materialistic and individualistic approaches to life that it spreads. Liberal values mixed with lusotropicalist (the belief that all members of our former colonies were Portuguese, and were the same as us) propaganda – this was very common during the Estado Novo, and it formed a destructive cocktail that still pollutes the minds of the older generations (our version of the “boomers”). It’s usually said that the older generations are less open to mass immigration, but that simply isn’t true. They might be against mass immigration from Muslim countries, and from those countries that Portugal shares no history or culture with, but when it comes to our former colonies – which is where the bulk of our immigrants come from – they are its most ardent supporters, even more so than young, college-aged Leftists.

There have been several attempts by nationalists to regain political power in the past, but there has never been any attempt to wrest back control of our culture. That is what we as Escudo want to focus on. This is where we distinguish ourselves from the rest of the movement in Portugal. We are metapolitical. Without cultural hegemony, we will never see the day when our ideas are implemented.

Éordred: What do you think of the possibility for cooperation with the Spaniards and Iberianism?

Escudo Identitário: There has always been anti-Spanish sentiment in Portugal, which is normal, since we are a much smaller country, and there has always been the threat of a Spanish invasion. Spain ruled us for sixty years at one point. However, considering the threat of becoming a minority in our own homeland, we understand that we have to let go of old grudges and join together, not only with our Spanish brothers but with all our European brothers in the pursuit of a new European Union, one that is built on the foundation of identity and bound by blood rather than material interests and petty liberalism. What we have now is an EU where the peoples, the cultures, and the countries are all viewed as nothing but obstacles to the hegemony of finance. We simply can’t afford to have another brother war since, as Victor Hugo said, “A war between Europeans is a civil war.”

Éordred: What is your view of nations like Brazil, where they speak Portuguese but have drifted away culturally and are less racially homogenous, or where the people are of a different race entirely, as in Angola? And do you think Jair Bolsonaro’s rise will help you in Portugal?

Escudo Identitário: We have almost nothing in common with those nations. Some nationalists love to fetishize our old symbols and dream about our imperial history, but truth be told, nowadays there is nothing apart from the language (and in some cases even this is questionable) linking us to our former colonies, which are united in the CPLP (Community of Portuguese-speaking Countries). We should maintain our historical ties with them, but they must understand that our focus and our future lies in Europe, just as their future lies in their own respective continents. There is nothing to be gained from more integration, or from some kind of “CPLP Schengen Zone” (which is basically a euphemism for flooding Portugal with even more immigrants from our former colonies).

Regarding Bolsonaro, he might embolden some local politicians, but in the long run, it will be mostly irrelevant for us.

Éordred: You have an upcoming event in May, featuring some well-known speakers of the international Right, but also some native Portuguese speakers. What can you tell us about this event, and more generally about how you shape your activism? 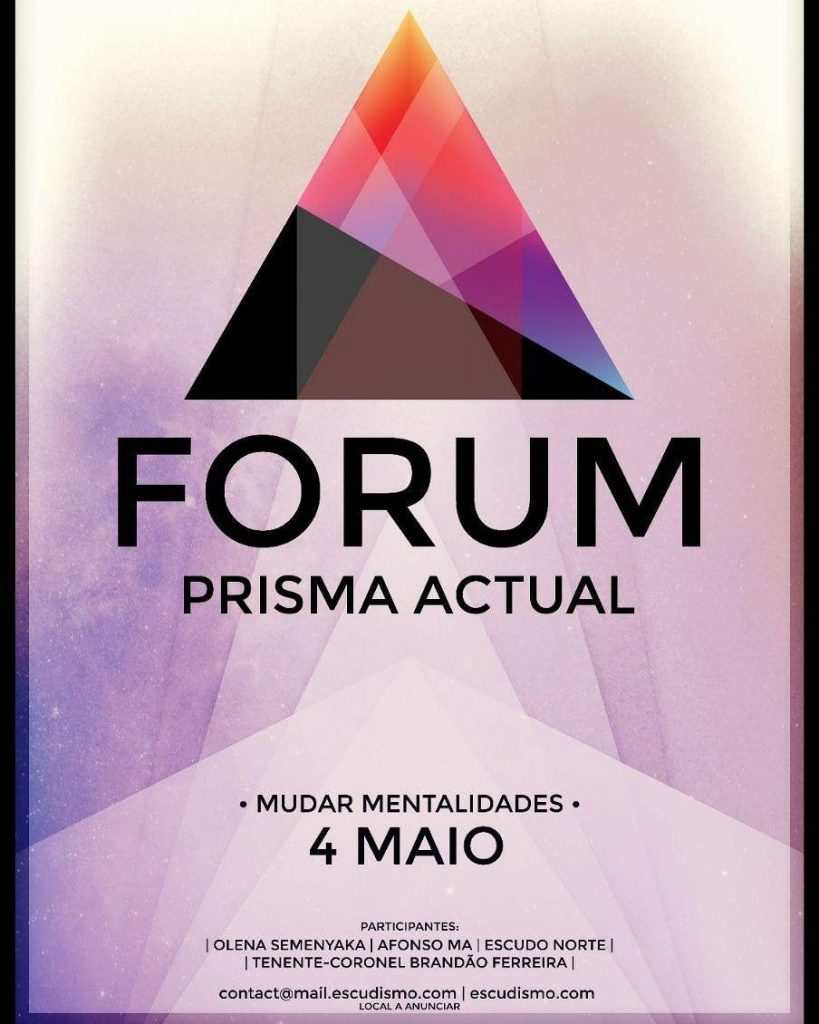 Escudo Identitário: This event is our first entry into the world of conferences and meetings. We understand that unless we these ideas with a large public we won’t go very far. Forúm Prisma Actual, which basically means Current Scope Forum, will be a space to discuss and spread our ideas freely, and to invite prestigious people from movements around Europe. This year we will have Olena Semenyaka from the Ukrainian National Corps. We couldn’t ask for someone better to start off our initiative. We will also have Lieutenant Colonel Brandão Ferreira, who is an expert in geopolitics, and who will share with us some of his ideas regarding Portugal’s role in the world today. The other two speakers will be Afonso MA, our current leader, and a speaker from Escudo Norte, our chapter in northern Portugal. It will be a very thorough conference, as we will cover many different pressing issues such as geopolitics, demography, activism, and metapolitics.

Usually, whenever we organize something in Escudo, we don’t charge people, but instead ask them to give us whatever they feel like giving. Not only does this allow younger people to have easier access to our content and still feel like they are giving something toward the cause, but in general we have found that people tend to actually give more than they would have been asked for as a ticket price.

It is crucial to have these spaces of free discussion, because we’re witnessing more and more government and media crackdown on “dangerous” ideas. Not only that, but the current topics that are being discussed on a national scale – apart from football, of course – are completely stale. There are no new ideas, there are no new initiatives, and whenever there is a debate, both sides basically agree with one another. We need these spaces in order to bring fresh air to a decaying nation, to challenge the status quo head-on, and simply because they don’t want us to have them. There is no doubt that in a free speech environment, our ideas would prevail, but since such an environment does not exist, we must build it ourselves and do what our motto begs us to do: Defend the Future.

« The Glory of the Æsir:
Bloodstar