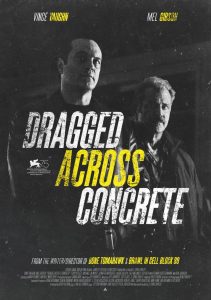 Dragged Across Concrete, S. Craig Zahler’s latest film, is a hardboiled, slow-burning neo-noir crime thriller that examines the plight of white men in modern America and the circumstances under which ordinary men are driven to crime. It further establishes Zahler (Bone Tomahawk [2015], Brawl in Cell Block 99 [2017]) as a highly talented filmmaker who is willing to take creative risks and deal with controversial ideas.

Set in the fictional urban dystopia of Bulwark, the film is a throwback to 1970s grindhouse cinema: gritty and bloody, with a pulp fiction sensibility. The plot revolves around two white police officers—Brett Ridgeman (Mel Gibson) and Tony Lurasetti (Vince Vaughn)—who are suspended on account of having used “excessive force” in their arrest of a Hispanic drug dealer. Faced with six weeks of unemployment, they decide to go rogue and rob a drug dealer in order to make ends meet: “We have the skills and the right to acquire proper compensation.”

Like Bone Tomahawk and Brawl in Cell Block 99, Dragged Across Concrete unfolds at a leisurely pace (running at about two and a half hours) and gradually builds up to a violent final act. The languorous pacing might bore some viewers, but it pays off in the end. Zahler has a knack for building tension and arranging each narrative element such that the plot develops like a game of chess.

Ridgeman and Lurasetti are, above all, normal working-class white guys: Ridgeman a middle-aged father and grizzled cop, Lurasetti a younger guy planning to propose to his girlfriend. They hold vaguely Right-wing views but are not consciously political. Lurasetti quips: “I’m not racist; every Martin Luther King Day, I order a cup of dark roast.” Glimpses of their home lives underscore their “everyman” quality, as does their casual banter (which also livens up the tedium of hanging around in cars during stakeouts and trailing vehicles in real time).

At the same time, Ridgeman is a loner and an outcast, a man left behind by modernity. Gibson was born to play this role, channeling the spirits of Travis Bickle and Pike Bishop from Sam Peckinpah’s The Wild Bunch (1969). Ridgeman’s world is ruled by effete, PC bureaucrats who care more about appearances and politeness than actually fighting crime. There is a striking scene emphasizing this point in which an Asian convenience store clerk is watching a report about Gibson and Vaughn’s suspension when an armed robber suddenly bursts in and kills him.

The theme of race is prominent throughout the film. When Ridgeman and Lurasetti are suspended, their boss (Don Johnson) remarks that “being accused of racism in today’s public forum is like being accused of Communism in the ’50s,” and adds, alluding to the persecution of Gibson himself, that even casual remarks made in private can ruin one’s career. Ridgeman has consistently been denied a promotion due to his uncompromising personality, and his family live in a poor, predominantly black neighborhood. We learn that his daughter has been assaulted five times by young black men. His wife has an “I’m not racist, but . . . ” moment and says that she wants to move to a better (whiter) neighborhood. This provides the impetus for Ridgeman’s turn to crime.

Zahler does make a couple of concessions. Lurasetti’s girlfriend is of mixed-race heritage. The film also features a secondary storyline involving a black ex-convict, Henry Johns, who, like Ridgeman and Lurasetti, has turned to the criminal underworld to support his mother and his wheelchair-bound younger brother. He ends up working for the same guy that Ridgeman and Lurasetti are after. Their stories run parallel to each other and are interwoven throughout the film. They intersect in the final act, in which Henry turns out to be a man of integrity.

The film is sympathetic to Henry. That said, one gets the sense that his character only exists so that Zahler can claim to have engaged with multiple perspectives and to have eschewed racism. The subplot involving Henry and his sidekick, Biscuit, feels forced and perfunctory. Gibson and Vaughn receive much more screen time than Henry and Biscuit and are given more nuanced backstories and personalities. It is obvious that Zahler is more interested in the former pair. This makes sense: the question of what would drive two ordinary, law-abiding white policemen to crime is a more interesting premise than examining the motivations of a black criminal who just got out of jail and was probably predisposed to criminality to begin with.

There is also an anti-feminist subtext to the film. The “damsels in distress” motif in Bone Tomahawk and Brawl in Cell Block 99 reemerges here, with Ridgeman seeking to protect his wife and daughter. Ridgeman and Lurasetti harass the wife of the drug dealer arrested at the beginning of the film, which is played for laughs. In one extended interlude, a woman cries at the thought of returning to work from maternity leave and parting with her child, but her stay-at-home husband forces her to go to work. Then she is fatally shot during a bank robbery. (The mastermind of the robbery—a man named Vogelman—is the heroin dealer that Ridgeman and Lurasetti want to rob in turn.)

Zahler has not spoken much about his own views. He claims that he is “not a political person” and that his films are not driven by ideology. But each of his films has a pro-white slant: Bone Tomahawk is a Western with elements of horror that depicts bloodthirsty and savage Native Americans who kidnap white settlers, Brawl in Cell Block 99 depicts a white man (played by Vince Vaughn) who is sent to prison and must fight to protect his family, and Dragged Across Concrete looks at the plight of white men in modern urban hellholes.

One might ask whether Zahler, who is Jewish, genuinely sympathizes with working-class white men or whether he is just an edgy provocateur. He shares Tarantino’s love of the outré and revels in controversy: he penned the script for Puppet Master: The Littlest Reich (2018), a movie about sadistic Nazi marionettes who embark on a killing spree. He also writes for the horror magazine Fangoria (recently purchased by the studio Cinestate, which produced Zahler’s previous films as well as Puppet Master: The Littlest Reich and The Standoff at Sparrow Creek [2018]).

I am sure that the shock factor partly accounts for Zahler’s fascination with “far-Right” themes, but his films also have genuine spiritual and psychological depth. The protagonist of Brawl in Cell Block 99 is a Christ-like figure who must descend into Hell (prison) and sacrifice himself for the greater good (his family). Dragged Across Concrete features a similar character arc and captures the alienation, despair, and silent rage of white men in the modern era.

Gibson and Vaughn, of course, are both known for their conservative views: Vaughn is a pro-gun libertarian (as is Kurt Russell, the lead in Bone Tomahawk), and Gibson is an anti-Semitic traditionalist Catholic. A picture of the pair taken during Meryl Streep’s anti-Trump speech at the 2017 Golden Globes ceremony shows Vaughn glaring and Gibson frowning at the actress, in contrast to the approving audience around them. 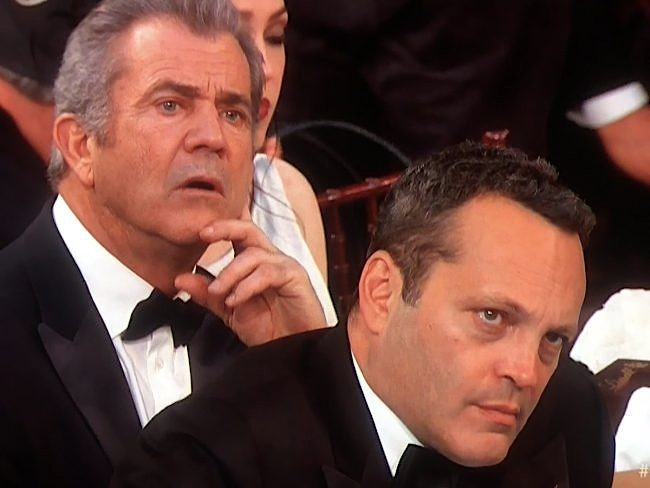 When The New York Times profiled White Nationalist Tony Hovater, readers reacted with outrage and argued that portraying him as a normal person made him seem benign and sympathetic (“On a recent weekday evening, Mr. Hovater was at home, sautéing minced garlic with chili flakes and waiting for his pasta to boil”). The article was clearly intended as a warning about “the Nazi next door,” but people rightly recognized that it actually had the effect of making White Nationalists seem relatable. Dragged Across Concrete functions in a similar manner. White guys watching the film will relate to Ridgeman and Lurasetti, and will find themselves sympathizing with Ridgeman’s struggle to protect his family and his alienation from the modern world.