Lobster Man Bad:
A Reply to Jordan Peterson Regarding Nationalism 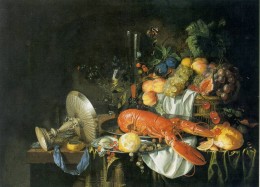 Ethnic pride and taking pride in one’s ancestral achievements is wrong, according to Jordan Peterson, because they weren’t things you did yourself, and therefore you don’t get to take pride in that. In fact, it’s a burden.

This is nonsense. When one takes on the burden of one’s ancestors, you are owning their achievements, both the good and the bad, and pride in such things is not a moral judgement. It is a form of responsibility, and moreover the cherishing of one’s responsibility towards our past as we head into the future.

His attack on nationalism and the “unearned gift” of pride in your ancestors was the first thing that made me question Peterson. I still liked him at the time, but I remember thinking that he wasn’t making sense. If I am a genetic and cultural manifestation of my ancestors’ legacy – which I am – then I can take pride in my ancestors and what they did, because if they had not done those things, I would not exist to manifest those qualities. Thus, taking pride of what lives inside me, and lived inside them, makes logical and biological sense. I am, in other words, expressing my gratitude for my existence and those who made it possible. It is, in a way, an existential form of worship, a metaphysical burden to shoulder with a smile and a flutter in the heart when one realizes that we are carrying our entire heritage within our bodies, and that we can pass it along to others. This transcends the individual.

Within me blooms all of my ancestors and their traits. I am not merely me, but also them. I am a link in a chain, but I am also the chain itself. In fact, I am more chain than link, since I am in a way as much myself as I am all of those who made me through their life’s work. My ancestors gifted me with everything that I am. To take pride in this is natural, and there is nothing immoral about it. I will pass this very same lineage on to my own children, and raise them to be proud of it!

From birth, you were given something deeper than merely the physical processes of the body you possess. You are a summation of everything that came before you. Honor your heritage, and create a lineage worth passing on, just as your ancestors did; manifest the voices and traits of a thousand successful ancestors responsibly and with pride.

It is ironic that Jordan Peterson’s icon is the lobster. Aren’t lobsters taken away from their pod and slowly boiled to death in a pot of water? Hasn’t the West been targeted in the same way? Are we not in a pot, ready to boil? Peterson wants you to be isolated from your heritage and community and slowly boiled without posing a threat to anything other than your bedroom’s hygiene level. Nationalism and ethnic pride are wrong, he says, because you are but a mere individual facing the universe alone. But this is untrue. Simply by virtue of being human, you are more than yourself and more than a mere individual. Know who you are, honor it, and be proud as you take your rightful place in the chain that runs from your forefathers to your descendants, and pass on what was passed on to you.

Keep in mind what Peterson is doing when he puts people off nationalism: he is trying to prevent his Gamma audience from becoming fully-integrated social beings, rendering them nothing more than atomized individuals. If his audience was to become nationalist, they would no longer have a need for him – his advice, books, and world tours. Get back in the pot, bucko. It’s nice and warm in there.