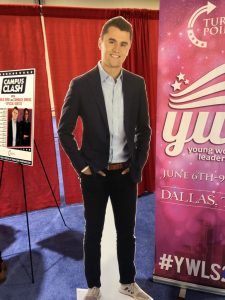 Charlie Kirk at CPAC, where a cardboard flat = truth in advertising

Another CPAC has come and gone, and national populism was almost non-existent at this year’s conservative gala.

Even though Donald Trump became president on a national populist agenda that challenged conservative orthodoxy on immigration, foreign policy, trade, and state power, CPAC 2019 offered the impression he won on the stale conservatism of Ronald Reagan.

The major themes of CPAC 2019 were the evils of socialism (but no mention of why it’s becoming popular), the sheer awesomeness of Israel, pandering to non-whites, and the greatness of capitalism. There was only one panel on immigration, none advocating foreign policy realism, and just two speeches that delivered a nationalist message. One was from the Italian nationalist politician Giorgia Meloni, which largely went unnoticed.

The other was from conservative commentator Michelle Malkin, which did get noticed [2]. Malkin scorched [3] Republican leaders for failing their voters on immigration and insisted diversity is not a strength. It was the highlight of a depressing conference that banned nationalists and followed the orders of Left-wing reporters.

The reason for this alleged need to increase immigration was to satisfy the demands of “our corporations,” a sentiment alien to the spirit of national populism. Trump once promised a new movement on the Right that would push the interests of white America against the dictates of globalism. Now we’re treated to the same old platitudes. “We stand with Israel!” “Socialism sucks!” “Tax cuts rock!” It’s movement conservatism dressed up with funny tweets and quasi-populist bravado.

There’s unfortunately a group that represents this sad vision of Trumpism—sans the funny tweets. Turning Point USA was the dominant presence at CPAC, according to The Daily Beast [5]. TPUSA’s young leader, Charlie Kirk, had a presence everywhere, including a giant cardboard cutout of himself that CPAC attendees could take a picture with. Republican National Committee Chairwoman Ronna McDaniel praised Kirk and fellow TPUSA figure Candace Owens, saying the party needs more leaders like them. Several other speakers, including President Trump, also gave shout outs to Kirk, Owens, and TPUSA for the “incredible work” the group does.

TPUSA represents Trumpism stripped of nationalist policies and a clear sense of purpose. This is Trumpism as a personality cult advocating for low-IQ movement conservatism. It doesn’t fight for white America, it grifts off white America.

TPUSA’s mission statement [6] claims it is a group that works “to educate students about the importance of fiscal responsibility, free markets, and limited government. Through non-partisan debate, dialogue, and discussion, Turning Point USA believes that every young person can be enlightened to true free market values.”

The group is bankrolled by numerous conservative donors and is the most prominent conservative student group at the moment. That achievement is largely due to its founder, Charlie Kirk, glomming onto the Trump family and moment. Kirk hasn’t really changed the message of the group to conform to the Trump moment outside of sycophantic praise for the president. The 25-year-old TPUSA leader is still primarily concerned with promoting the glories of capitalism and how kids just want tax cuts.

Campaign Trump would have taken Carlson’s side. The then-candidate’s arguments against mass immigration, neoconservative foreign policy, and bad trade deals always focused on how these things hurt American citizens and it was the government’s job to right these wrongs. National Review writer Kevin Williamson attacked candidate Trump for imagining the nation as a family in his infamous 2016 essay [8] hoping for the death of white working-class communities.

Candace Owens is the perfect symbol of the degraded Trumpism TPUSA promotes. Owens didn’t even vote for Trump. In 2016, she was a public liberal who ran a dox site [9] focused on “racists.” Soon after Trump won, Candace rebranded as “RedPillBlack” and made videos on how Democrats were the real racists. Based blacks are always a hit with white conservatives, and Owens has milked the grift for all its worth. She’s a leader of the conservative movement and just launched her own show on the very popular PragerU YouTube channel.

It’s unclear what political principles Ms. Owens has besides grabbing attention and supporting whatever Trump does. The only policy she has advocated with gusto is criminal justice reform, a policy she claims would win over non-white felons for the GOP. Owens has accused Republicans who oppose this policy that would prioritize the interests of non-whites over the safety of whites of, gasp!, racism. She derided [10] Arkansas Sen. Tom Cotton’s opposition to the policy as a denial of “opportunity to millions of black Americans.”

That statement smacks of the “identity politics” TPUSA rails against, but on that issue, the group displays remarkable hypocrisy. Judging by the group’s conferences and rhetoric, the only form of identity politics that is not okay is white identity politics. TPUSA has organized leadership conferences for blacks, Hispanics, and women and it frequently touts Trump’s dumb talking points about how much his presidency is benefitting women and minorities.

Owens is spearheading the ultimate expression of conservative non-white identity politics: “Blexit.” Blexit [11] is a well-funded venture to convince blacks to leave the Democrat plantation. The primary pitches are: Dems R The Real Racists, low black unemployment, Kanye West, and criminal justice reform. So far, Blexit hasn’t made any inroads in the black community for the GOP. It was debuted right before the election, but, once again, less than ten percent of blacks voted [12] Republican in 2018. The first Blexit event in January drew in a predominately white audience [13], demonstrating this latest endeavor at non-white pandering is a farce.

Kirk and Owens aren’t just limiting their efforts to the US. In February, Turning Point UK was launched with a bevy of minority faces fronting the group. One of the first videos put out by TPUK included a list of what they are fighting for and what they are fighting against. The things TPUK fights for are: free markets, free speech, free nations, free people, limited government, personal responsibility, and common sense. What they fight against: socialism, racism, identity politics, alt-right, alt-left, nativism, and collectivism.

In other words, they fight for the interests of corporations against genuine nationalism. The video outlining what they fight for claims they want to work with “mainstream organizations” to “build a fresh movement.” The purpose of the group appears to play gatekeeper for the British Right and exclude actual nationalists from the discussion.

TPUK’s other videos are similarly goofy, sporting such titles as, “Sorry to disappoint, but I’m not a socialist [14],” “The Racism of the Left, [15]” “I’m Conservative and Gay. So What? [16],” and “I’m Literally a Capitalist [17].” Unsurprisingly, the launch of the group [18] was met with mockery and derision by the British. Leftists mocked it on Twitter, journos called the cucky group “alt-right,” and the Conservative Party warned its young members to not associate with TPUK. The good bit of news is that the group won’t be able to play gatekeeper due to its low reputation. The bad news is that the group netted the support of prominent politicians like Jacob Rees-Mogg and has plenty of funding to continue its stupid mission.

TPUSA raised $8.2 million from July 2016 to June 2017 [19] largely on the premise it would wean young people away from socialism and big government. However, the main consumers of TPUSA’s message are boomers. According to the data gleaned from TPUSA’s Facebook advertising [20], the primary demographic for the group’s terrible memes is the 55-64 age group. People under the age of 34 constitute less than eight percent of the average consumer pool for TPUSA’s ads.

It should be no surprise that this group struggles to win over young people. Its aesthetics are terrible, its message is Boomer-fried, its most famous activism put college students in diapers, and its leaders are obvious grifters. Compare the astroturfed nature to that of Identity Evropa, a bona fide youth movement that overcomes far more challenges to win over young people. That’s a group that actually expresses the Trump moment, but its leader, Patrick Casey, was banned from CPAC. Grifting is more acceptable than nationalism.

TPUSA’s continued success and influence is due to the Trump apparatus’ embrace of the group. It’s why the GOP celebrates their efforts and CPAC lets them run their event. National Review types dislike TPUSA as much as the Dissident Right does, but their distaste doesn’t seem to affect the group’s power.

Conservative youth groups have nearly always been stupid efforts to convince young people to embrace ideologies antithetical to their interests. TPUSA is just the most visible and influential expression of this trend. It would be nice if we could sit and laugh at their harmless diaper protests. Sadly, the people on the American Right with power think they’re awesome and prefer their message to the national populism of Tucker Carlson and Ann Coulter.

Trump didn’t win the presidency on TPUSA’s message. He won because he challenged the idiocy of Conservative Inc. and offered a new Right-wing alternative to the GOP’s failures. But since he won, the president has made too many concessions to the idiocy he ran and won against.

It appears that Trump’s 2020 message will have more in common with TPUSA than Carlson. Middle America will be treated to the tired message of tax cuts, more aid for Israel, “socialism bad,” and more immigrants for corporations. And Charlie Kirk and Candace Owens will be right there with Trump as he abandons Trumpism to tout TPUSAism.

National populism is still the most viable right-wing ideology in America. It just needs a new champion — or for its old champion to come to his senses.