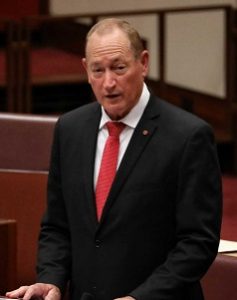 Australia’s Senator Fraser Anning, one of many victims of double standards against white Rightists in the mainstream media.

In the aftermath of the Christchurch shooting on March 15, Australian Senator Fraser Anning was widely criticized [2] by the media for saying that “the real cause of bloodshed on New Zealand streets today is the immigration program which allowed Muslim fanatics to migrate to New Zealand in the first place.” He was right: there are virtually no examples in human history of peoples passively acquiescing to foreign invasion and demographic replacement. This is a statement of fact. Throughout history, peoples in such situations have almost always reacted violently to the encroachment of foreigners upon their territory. In the absence of a battlefield to fight on, it is inevitable that certain white men will turn to other forms of violence. This does not morally justify killing civilians, but it does mean that “far Right” terrorism would not exist were it not for mass migration into white countries.

The same applies to any attack in which the attacker was goaded into violence by a foreign aggressor. One could argue that the underlying cause of 9/11 was America’s pro-Israel foreign policy, for example. The attack was a predictable reaction to America’s actions in the Middle East, just as Pearl Harbor was a predictable reaction to the strict sanctions FDR imposed on Japan; America was partially responsible in both cases.

Of course, Islamic terrorist attacks in the West generally do not fit that pattern. “Far Right” terrorism and Islamic terrorism are fundamentally different in this respect: the former stems from a defensive position and occurs in reaction to the larger threat of racial replacement, while the latter stems mainly from a fanatical desire to subjugate the infidel.

Despite this, the media continue to blame attacks like the Christchurch shooting on “white supremacy.” The aftermath of the Christchurch shooting saw a flurry of opinion pieces blaming White Nationalism for it, calling for a renewed crusade against “racism” and “Islamophobia,” and demanding more censorship of dissident views. A Muslim journalist declared in The New York Times [3] that “all those who have helped to spread the worldwide myth that Muslims are a threat have blood on their hands,” and that “these attacks are the latest manifestation of a growing and globalized ideology of white nationalism that must be addressed at its source – which includes the mainstream politicians and media personalities who nurture, promote and excuse it.” NBC [4] exhorted mainstream religious and political groups to “renew the fight against ideologies that threaten the safety of citizens around the world by reminding their co-religionists, supporters and members of our shared commitment to combat fascism and white supremacy in all its poisonous forms.” New York magazine [5] dramatically intoned that “the endgame of white supremacy is always death,” and claimed that White Nationalism is inherently violent. The list goes on.

By contrast, terrorist attacks committed in the name of Islam are invariably followed by articles urging people not to “blame all Muslims,” and to avoid stoking “Islamophobic” sentiment. The media generally cite [6] examples [7] of moderate Muslims who condemn the attack in question, and sympathetically portray innocent Muslims “grappling with backlash [8]” and “Islamophobia [9]” in the wake of said attack. A year after the shooting in Orlando, the Times bemoaned [10] the wave of “Islamophobia” caused by the massacre. It is difficult to imagine the media regretfully recounting the “backlash” faced by White Nationalists following attacks such as the Christchurch shooting.

Some have blamed [11] Islamic terrorism on “Islamophobia,” citing biases against Muslims and young Muslims’ sense of alienation from their European peers. There is an element of truth to this, but the same people making this claim would never be willing to consider why young white men might likewise feel alienated.

The media exempt moderate Muslims from having to answer for the crimes of their co-religionists while simultaneously linking anyone remotely critical of anti-white policies (or even white people as a whole) to “far Right” terrorism. A CNN editorial [12] argued that “demanding that innocent Muslims always make new statements about crimes they could not have stopped, from which they do not benefit, and have always condemned anyway, is an act by the powerful assigning collective guilt against the powerless.” One Huffington Post article was entitled “Stop Asking All Muslims to Condemn Terror [13]” (it is curious how Leftist journalists write as though they are an embittered minority, despite their domination of the mainstream media – perhaps they are aware on some level that most normal Americans disagree with them). But when Muslims are the victims of an act of terrorism, “the responsibility for facing up to [Islamophobia] falls on all of us [14]” – that is, all white Westerners.

Most Muslims in white countries condemn terrorism, but a substantial minority of them (about one in four in this study [15] of Muslims in the United Kingdom following the 2005 London bombings) report sympathizing with Islamic terrorists’ motives. I suspect that the numbers would be roughly similar if opponents of mass immigration were polled on their opinions regarding the Christchurch shooting. Yet the media blame “far Right” terrorism on all critics of Islam and immigration, while Muslim extremists are treated as an isolated phenomenon. They further allege that the “logical conclusion” of criticizing immigration is violence while exempting Islam from this line of reasoning, in spite of the central role that violence has played in Islam’s history.

When possible, the media attempt to downplay the link between Islam and terrorism. Tamerlan Tsarnaev, for example, was described by the BBC as a “lone wolf [16]” who was “alienated and lost.” After the San Bernardino shooting, the Times claimed in a headline that the perpetrators had “no clear motive [17]” despite their obvious links to terrorist groups. Likewise, Obama famously refused to utter the phrase “radical Islamic terrorism.” When the situation is reversed, the media are eager to emphasize Muslims’ victimhood. President Trump was criticized for not including a reference to Islam in his statement offering condolences to the people of New Zealand. He was also condemned by the media for claiming [18] (in an obvious attempt to distance himself from “far Right extremism”) that White Nationalists are merely a “small group of people” who do not pose a large threat. A moderate Muslim attempting to distance himself from extremists in a similar manner would likely be praised.

Events like the Christchurch shooting play right into the enemy’s hands, but they can be turned to White Nationalists’ advantage by highlighting the media’s role in weakening popular resistance to immigration and facilitating demographic replacement in white countries by way of deceit and manipulation.