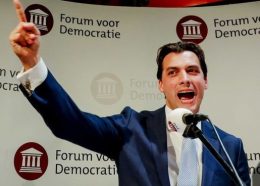 Forum for Democracy (FvD) is a Dutch populist party that entered politics in 2017, gaining two seats in our Parliament. In the Senatorial elections this week, they won 13 out of 75 seats, becoming the biggest party in the Senate and the first party to jump from having no Senate seats to becoming the largest, ever. Altogether they received roughly fifteen percent of the vote, far surpassing Geert Wilders’ established populist party, the Party for Freedom, which got seven percent. Upon their victory, Thierry Baudet, the party’s leader, gave a remarkable speech that, combined with his electoral victory, caused the media to erupt in flames, calling his party fascistic and racist. I have translated the speech below. — Éordred

The owl of Minerva spreads its wings at the fall of the evening.[1] And not only this evening, dear friends, dear campaign members, dear party members, dear comrades. Only now, in these late hours of the day, are the first results coming in, and now we know where we stand and what happened today.

The owl of Minerva only now spreads its wings, because it is often only at the last moment that we realize what we have and what we should have cherished, when it is almost too late.

But like all the other Boreal nations,[2] we are being destroyed by the very people who have been appointed to protect us. We are being undermined by our own universities, our journalists, by those who receive cultural subsidies to produce our art, and even by those who design our buildings. And above all, we are being undermined by our rulers. This is a clique – a small clique of self-important professional bureaucrats, people who have never read a book in their lives and have no clue how to deal with long term-issues – that rules us. Unfortunately, they control our country’s decision-making process, and through a curious mix of cynicism, lack of ability, and self-interest, they manage to make the wrong decision every time. Not for much longer!

Economic incompetent Mark Rutte[3] raised taxes in the depth of the crisis, hurting people’s purchasing power and making the indexation of pensions impossible, which now, today, has left two and a half million Dutchmen in poverty. They live under the poverty line, unemployed or nearly so. Then, the three subsequent administrations led by Rutte left the borders wide open, breaking every immigration record. With all the integration and immigration problems we already have, we again let in hundreds of thousands of people from totally different cultures. The cabinet even voted down our proposal to begin aiding those Syrians who can return, to go back. Then they signed the ruinous Marrakech migration compact, with all the damage that will do in the coming years.

An absolute crisis looms over our police force, which is barely able to ensure our safety on the streets as it is, and that will be put under further pressure, as we saw demonstrated last Monday in Utrecht, where we saw that rapists, robbers, and other scum roam our streets freely. It is a disgrace.

There is sheer poverty in our educational system. There is a byzantine bureaucracy in our healthcare. We have to deal with both. But these are not only Rutte’s mistakes. He also let the plans of that awful European Union run roughshod over us. He sacrificed pulse fishermen to them. He strangled the farmers with phosphate restrictions. He even accepted that our pensions will be regulated by the EU.

What is going on here? Why is this happening? We no longer believe in The Netherlands, that is for sure. Not in Western civilization, either. Not in our language, which has disappeared from our universities. We no longer believe in our arts, in our past. We no longer celebrate our own holidays. Amongst all this lack of faith, in this giant vacuum – a spiritual and cultural vacuum – a heresy has arisen, a new and imminent religion, a political theology: the Cartel.[4] They believe in nothing, but they worship a false idol called Transition. They are willing to sacrifice hundreds of billions, thousands of billions even, on the altar of this Golden Calf, in the form of windmills, heat-pumps, solar panels, and other costly projects that offer us nothing, that do not help the planet, and which will cost us lots of money – and which will punish us greatly. It is a masochistic heresy, this secularized doomsday thinking that has taken control of the hearts and minds of our rulers. It is a mania comparable to the one that once held Easter Island in its grip.

This idolization of renewables will not only plunge our economy into despair. It is meant to offend our spirits and our self-conception. Indeed, guilt is what feeds this climate witchcraft. The power hungry elites parrot the rhetoric of penance that our ecological high priests preach to us. It is pure oikophobia, sheer self-hatred. It is a guilt complex that obviously needs some kind of outlet. And if you protest? If the people turn against this cowardly surrender of our nation, do you know what they do? They ban referenda. That is the state our country is in today.

This arrogance, ladies and gentlemen, friends, this stupidity was punished today.

Because on this day, now that we are in this crisis, in this dusk, this sunset, on this day, the owl of Minerva has arisen. Today, Forum for Democracy is the biggest party – or at least shares first place – in The Netherlands. The voter has spread his wings like the owl and shown his true power. The owl of Wisdom has taken flight and has shaken the Earth with its wingbeats, for these wings do not exist merely to fly. They are like turbines that will put the winds of change in motion, to make our country ours again, to end this epoch of cultural, economic, and political capitulation.

The result, ladies and gentlemen, the result is here tonight. Menno Wigman wrote, “I would never have noticed that the Sun exists, if it did not set every night.” The beauty of The Netherlands is the same: I would never have noticed it if our rulers had not spoiled its beauty. I will go further and say that if this mass migration that has changed our neighborhoods had never happened, if all this Leftist indoctrination in the universities and this ugly architecture had never existed, if the EU hadn’t kept expanding its powers, if we did not have this climate heresy – if all this madness had not happened, I would never have entered politics. But, we have been called to the front. Because we must. Because our country needs us. And we, dear friends, we are the product of three hundred thousand years of evolution. We survived the ice ages, we have slain mammoths. We are the carriers and inheritors of the greatest civilization that has ever existed. We carry in us a unique power, and a few decades of indoctrination by the media and the schools can never bury that. What is inside us can never be taken away. And today, you can feel it in this hall. Today we have chosen to fight! To dream again, to hope again, to fight again. If I look back at the last three years, this is the feeling that I have most deeply: that we have achieved something together, the desire to rebuild, to have a go at the world again, together. A belief in the future. And for that, I want to thank you all.

We did not take it lying down. We started our own party. And everyone said, “You will never succeed, you will just splinter the political landscape further.” Peppi and Kokki talk,[5] and this and that. But we did succeed, and we got two seats in Parliament on March 15, 2017. And then, too, they had their rhetoric ready. Then, too, Mark Rutte laughed, and said, “You can’t do anything with two seats.” And here we stand tonight. We are in every province. We are in the Senate. You have heard Annabel – we are in Amsterdam.[6] Derk-Jan Eppink is here tonight, who will lead our European electoral campaign. We will be there, too. Today is the day to send a message to Rutte and the establishment, and say, “You can no longer ignore us!”

We as Forum for Democracy members know that you needn’t accept Christian metaphysics to accept the Resurrection as the very core of Western civilization.[7] Something that seemed to be dead, that seemed to be in the past, that seemed to be behind us, we know that it can come back to life and bloom. The idea that what seems dead can bloom again, that is our motto, our Leitmotif. We are the party of the Resurrection, of the Renaissance of the West. That is what we wish to achieve. It has never been more urgent than it is now. It has never been more necessary that people of good will clasp their hands together and get to work, to reignite our ties to our traditions, to find our strength again and cross-pollinate, gathering what good we can find in this world and tie it to our ancient roots to make our country flourish again.

We are building. We are busy building a party with an educational department, with local branches, with provincial departments, with a Senatorial faction, with a Parliamentary faction, with a European faction. We will educate a new generation to defeat and replace the current rulers. We have the people to beat the EU. We have concrete solutions to mass migration. We have the people to reassert control over our borders and untangle the Euro currency, so we can finally rule our own nation again. We will not rest until our democracy is restored and the Cartel has been broken. We will introduce binding referenda, people’s initiatives, open applications to bureaucratic positions, elect mayors. And we will purge the NPO.[8] That is how it will be. We will reach beyond our horizons again, we will launch a renaissance in which we will regain our confidence, where we can live safely in our accustomed environment again and in which our democracy will be restored, and to which economic and cultural dynamism can return. And as you know, we are willing to work with any other parties to achieve this, for we are merely the flagship of the Renaissance fleet. Other ships can join us. We are willing to work with anyone, and we will prove this in the provinces, on the national level, and on the European level.

Friends, we will return pride to our country with this party. On this rock, will we build our church. We will restore our democracy, and today we have won the first major battle.

[1] The owl of Minerva was an expression used by Hegel to reference wisdom.

[2] Boreal, or hyperborean, is a term used to refer to northern Europe. The Dutch media has accused Baudet of using it in a racial context, claiming that he borrowed it from Jean-Marie Le Pen, using it as a synonym for “Aryan.”

[3] Mark Rutte is our current Prime Minister and the leader of the center-Right libertarian party. It has strongly shifted to the Left under Rutte.

[4] The Cartel is Baudet’s term for the establishment political parties.

[5] Peppi and Kokki were a Laurel and Hardy-style double act on Dutch television in the 1970s.

[6] Annabel Naninga is the Forum for Democracy municipal party leader in Amsterdam.

[7] The Christian Resurrection and the Renaissance are always used by the FvD to refer to a new renaissance of the West. Baudet is a student of Oswald Spengler.