Video of the Day
National Populism is Here to Stay 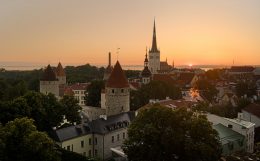 The video of Greg Johnson’s speech at the Blue Awakening Youth Conference in Tallinn, Estonia on February 25, 2019, in which he talks about how studies of the factors driving voters towards populism across the world demonstrate that National Populism isn’t going away anytime soon, and will in fact soon become the norm in many countries.