Is Catholicism a Bulwark Against Islam? 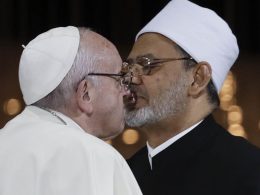 Pope Francis kisses up to the Grand Imam of al-Azha

For centuries, Islam had no greater foe in the West than the Catholic Church. While the secular princes warred among themselves and focused on their narrow interests, the Church was there to harangue Christendom’s rulers about the real threat to their civilization and go on Crusade.

The rapid ascent of Turkish power in the Early Modern era spurred a particularly anti-Islamic vigor in the Church. When Constantinople was lost, Pope Callixtus III sold off precious artifacts of the Vatican and halted a renovation program in Rome to fund a military operation to take the city back.

One of the most successful pontiffs rallying Europe against the Muslim enemy was Pope Pius V. St. Pius V pushed for the rescue of Malta from Turkish invaders and organized the multinational fleet that defeated the Turks at Lepanto.

Pius browbeat rulers such as Philip II of Spain to aid in Christendom’s defense. The pope’s letters always emphasized that Muslim invaders were Europe’s “common enemy” and there was nothing more important than Europe’s defense.[1]  Pius V was a great man of the West, but the Church he led no longer upholds his legacy. 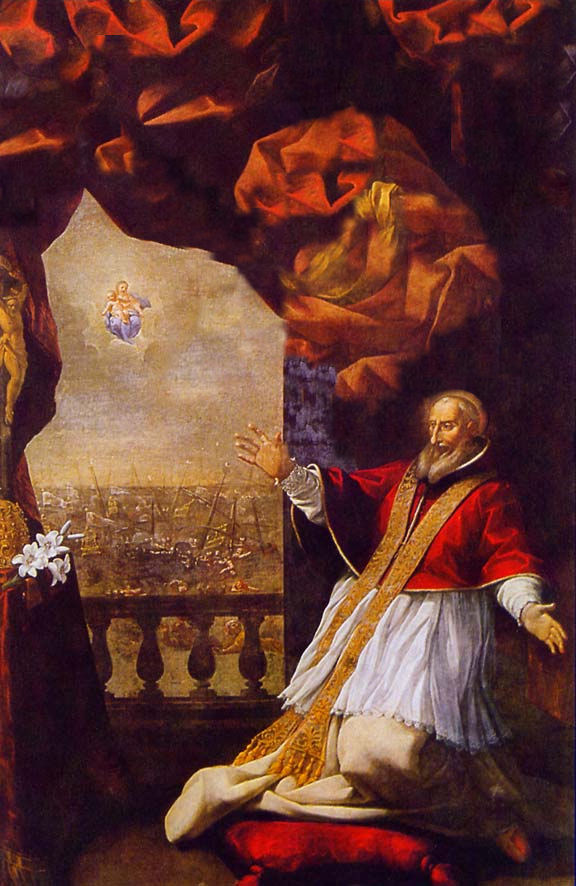 That was then: Pope Pius V and the victory at Lepanto

Pope Francis signified this in a recent meeting with the Grand Imam of al-Azhar. Francis and the influential imam signed a document affirming “human fraternity” between their two faiths and an appreciation for religious pluralism.

“The pluralism and the diversity of religions, colour, sex, race and language are willed by God in His wisdom, through which He created human beings,” the document reads. “This divine wisdom is the source from which the right to freedom of belief and the freedom to be different derives. Therefore, the fact that people are forced to adhere to a certain religion or culture must be rejected, as too the imposition of a cultural way of life that others do not accept.”

The imam and the Holy Father capped their meeting with an on-the-lips smooch, a fitting image for Pope Francis’s conciliatory stance toward Islam. The whole meeting would have horrified Pius V and the other pontiffs who spent so much blood and treasure in fighting the Muslim menace. Francis himself sees no threat in Islam. He once said: “Muslim terrorism does not exist . . . there are fundamentalist and violent individuals in all peoples and religions.”

Francis has harsher words for European nationalists who wish to keep Muslims out of their countries. “Extremist and populist groups are finding fertile ground in many countries,” he said in 2017. “They make protest the heart of their political message, without offering the alternative of a constructive political project.”

Pope Francis has long called for Europe to welcome Muslim immigrants with open arms. “All of us together, Muslims, Hindus, Catholics, Copts, Evangelical [Protestants] brothers and sisters — children of the same God — we want to live in peace, integrated,” Pontifex declared in his homily at a foot washing ritual in 2016. The Bishop of Rome cleaned the feet of Muslim migrants at the event, signaling his subservience to their cause. 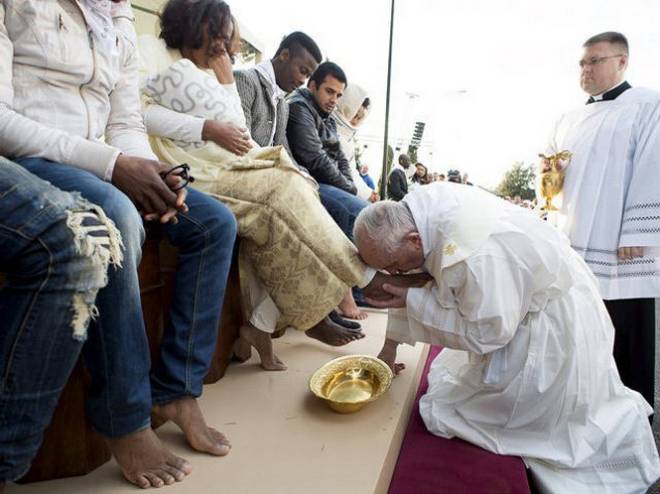 Francis’s behavior follows that of his predecessors. Pope John Paul II apologized to Muslims for the Crusades and kissed the Koran. Islamic outrage at Pope Benedict XVI’s mild criticism of Islam in the famous Regensburg lecture forced the pontiff to apologize to Muslims. At a later meeting with Muslim leaders, Benedict made sure he showed “all the esteem and the profound respect that [he has] for Muslim believers.”

Nationalists are familiar with the current pope’s issues and his hostility to our cause. What is less discussed is that Francis’s amiability to Islam is shared by the institutional Church. Church leaders throughout Europe have repeated the Pope’s call to welcome Muslim migrants and avoid nationalist solutions. The Church in Italy is particularly focused on this orientation.

The Bishop emeritus of Casserta, Monsignor Raffaele Nogaro, is ready to turn all churches into mosques in service to mass migration. “Morally and as a man of faith I would be willing to turn all churches into mosques if it were useful to the cause and if it helped to save the lives of poor and unhappy men and women, because Christ did not come to earth to build churches but to help men regardless of race, religion, or nationality,” Nogaro said last July.

The Church is one of the primary housers of Italy’s migrant surge, deploying several Church-owned properties for that purpose. One of the Catholic groups most active in settling migrants in Italy is, hilariously, the Order of Malta — the successor to the Knights Hospitaller who defended Europe from Muslim invaders for centuries. The current grand master of the order, Albrecht von Boeselager, has said Europe’s soul will be gravely affected if it does not take in more migrants crossing the Mediterranean.

That’s quite a different opinion from the Knights who died at the Siege of Malta and the Battle of Lepanto.

The Vatican’s Migration and Refugees office has continually berated Italy to take in more non-Europeans, deploying such messages as: “Immigrants make it possible to solve a problem that the current social security system is not able to face, namely the reduction in the number of Italian workers,” and “Migrants, the poor are a thermometer for our faith. Not accepting them, above all by closing our hearts, is not believing in God.”

Many Italian clerics have raised their voices in protest against the nationalist policies of Matteo Salvini. The Guardian even claims Catholic priests comprise the strongest opposition against Salvini. One priest forbade “racists” from entering his church. Others have led protests against the government. The powerful Archbishop of Milan has continually refused to meet with Salvini or any other officials from the Lega. Several priests vow to practice civil disobedience “like Martin Luther King” against a new law that rescinds “humanitarian protection” for many migrants. One of those priests told Salvini supporters that they shouldn’t display nativity scenes at Christmas because they’re not real Christians.

America’s Catholic institutions also play a major role in bringing Muslim immigrants to our country. Church-affiliated charities are one of the leaders in resettling refugees in the U.S., 40 percent of whom were Muslim in 2014. Catholic charities led the way in turning Minneapolis into Little Mogadishu. In the fiscal year of 2016, for instance, Catholic Charities of St. Paul-Minneapolis settled 317 Somalis into the Minnesota metropolis. The group touts its work as the perfect expression of Catholic Social Teaching and says concerns about the threat of these new arrivals are misguided.

Minneapolis is the epicenter of Islamic radicalism in America thanks to the Somali community brought to the city by Catholic charities.

It’s unlikely that the American church will change its ways. Federal aid for refugee resettlement makes up a substantial portion of the U.S. Conference of Catholic Bishops’ income, with the conference receiving over $2 billion for this purpose from 2008 to 2015.

The institutional Church is not an obstacle to Islam, and it’s not just the crazy liberal priests who welcome their old religious foes. Many trads see Muslim migration as a good thing for the West because they are people of faith and believe in God, unlike most white Europeans.

This argument was made by the influential integralist priest, Edmund Waldstein. Waldstein is the editor of the popular integralist outlet, The Josias. The priest argued in a 2017 essay that no nation has the right to frame its immigration policy exclusively on “what benefits us.”

One reader replied with his concerns about the mass migration of Muslims to the historic Christendom. Waldstein dismissed those concerns with this reply: “As to current Muslim immigration to Europe — Europe, or at least Austria, has become so secularized that it is a bit late in the day to worry about de-Christianization. Young Muslim men at least believe in God, which is a step up from most young Austrian men.”

Waldstein responded to further criticism of his stance with assertions that contact with Muslims persuade Europeans to return to the faith and that many Muslims convert to Christianity once they come to Europe. Both assertions are dubious as European church attendance continues to dwindle as the Muslim population soars, and the number of new converts appears negligible.

This may be just one priest, but The Josias does have significant influence over American Catholic intellectuals, and this opinion reflects the church’s current position. Other traditionalist Catholics like devout Muslims because they constitute a front against liberalism and see Islamic fundamentalism as a potential ally against secularism.

Many nationalists look to the Catholic Church as an institution that could unite Europe against Islam. It has in the past and will do so again if the right leaders take charge, so these right-wingers argue. However, there is no real militant movement against Islam in the Church. The Papacy was once a fierce enemy of liberalism. But ever since Vatican II’s rapprochement with the modern world, the Church has come to terms with liberalism.

The same appears to be happening with Islam. Islam is on the march, while Catholicism is on the decline. The Church wants to come to terms with this ascendant force in order to survive, albeit in a weakened and submissive state. Francis’s agreement and smooch with the grand imam allowed Catholics to celebrate mass in the Gulf States. The pope was the weaker partner in these negotiations, which is how they will be in the years to come.

Pius V, this pope is not. It’s highly unlikely Francis’s successor will demonstrate a more militant position against Islam — the church no longer has the will to make such a stand. Rather than an ally to resist Islam and other threats to the West, the Church is more likely to serve as an ally to these enemies.

Resistance to Islam will not come from the institutional Church, but the laity. Everyday Catholics will be the ones to force the Church to stand up against Islam and make no compromises the foreign threat. That role was once played by the popes; it’s now up to secular rulers and movements to carry on that mission

[1] Roger Crowley. Empires of the Sea: The Siege of Malta, the Battle of Lepanto, and the Contest for the Center of the World