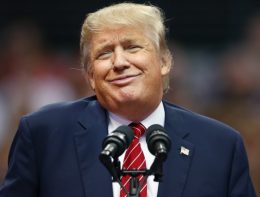 Anybody want to buy a used MAGA cap? Grilling season starts next month, and I hope that Ann Coulter takes me up on my offer to stop by with remaindered copies of In Trump We Trust. They should burn fine in my fire pit as we roast wieners, drink martinis, and lament the passing of a future that was never to be, like those jetpacks and flying cars from Popular Mechanics circa 1957. Donald Trump’s betrayal of his voting base concerning immigration is so profound and disheartening that if I were a teenage girl I might be listening to “Breaking Up Is Hard to Do” nonstop on auto-replay, but since I pride myself on my toxic masculinity, my thoughts run more to Patrick Henry: “Julius Caesar had his Brutus, Charles the First had his Cromwell – and may George the Third learn from their examples.” But Donald Trump will not learn from their examples – not because he can’t – but because he has no intention of doing so.

I held out hope for a long time – probably longer than I should have – that I would not need to pen these words, but the overwhelming evidence can only lead to one conclusion: Donald Trump is nothing more than Jeb Bush with a trophy wife. Hindsight is indeed 20/20 vision, and nowhere is this seen to greater effect than in a reassessment of the first two years of the Trump administration. Why all the appointments to positions in the Executive Branch of individuals who publicly oppose Trump’s alleged domestic and foreign policies? Why was Kris Kobach never offered a cabinet position? Why are there more Goldman Sachs alumni in Trump’s administration than in the Obama and Bush II administrations combined? Why is Mitt Romney’s niece the Chair of the Republican National Committee? The answers to all of these questions are simple and the same: Donald Trump is a NINO – a nationalist in name only. He talks a good game, but his actions are strictly GOP/Uniparty establishment globalism. Donald Trump is the GOP-e, a newer, cruder, flashier version of the old GOP-e, but the GOP-e nonetheless.

The hostility exhibited toward Trump is in reality an argument about style, not substance. The Percy Dovetonsils types in the old GOP-e, like George Will, Rob Portman, and Lamar Alexander, might lament Trump’s lack of an Oxford stutter or interest in the finer points of polo, but they can’t complain too much about what Trump has actually delivered: record-high illegal and legal immigration, corporate tax cuts and deregulation, a hands-off approach to antitrust, continued erosion of free speech, and a new war on the horizon in Venezuela to replace the war that’s winding down in Syria. If the members of the loony Left weren’t so loony, they’d realize that Trump’s their guy. There isn’t that much difference between the results of Donald Trump’s actions and the desires of Alexandria Ocasio-Cortez’s policies. Open borders, deplatforming, loss of civil rights for whites – you name it. Sure, Trump still says he’s for the Second Amendment, but what value is a promise from Donald Trump? Hey, everything’s negotiable, including beliefs and morality. Remember, it’s the Art of the Deal. It should give one pause that the book that reveals the true inner nature of Donald Trump was ghostwritten. What Gertrude Stein said about Oakland, California applies every bit as well to Donald Trump: There’s no there there.

Those poor souls who continue to view Trump as the Great White Hope God Emperor need to come to grips with the fact that Donald Trump has played all of us like fools. There’s no “Plan,” there’s no 4- or 5- or 6-D chess game, and there’s no great magician offstage pulling the strings. What Donald Trump has actually been engaging in during his presidency is far simpler, but even more subtle. It’s called the Long Con, a grifting enterprise that can last years. Think of Bernie Madoff, think of a bigamist who juggles five unsuspecting wives for twenty years, think of Elizabeth Holmes and the Theranos con. Donald Trump is the political equivalent.

Trump wanted to be President, and he’s a clever fellow. He quickly realized that opposition to immigration was a winning ticket, and he stuck to his position and it paid off. There was only one problem, and it only becomes evident in retrospect: Trump never believed in his own agenda. It was just a storyline, like the storylines that are developed by the writers of reality shows. A good story needs a protagonist and an antagonist. Trump set himself up as David going against the swamp’s Goliath, but it’s as fake as the “feuds” in the WWE. In the end, the script always reaches its predetermined conclusion. In Trump’s case, he needed to jettison his anti-immigration stance while simultaneously appearing to support it. He deliberately put people in his administration who sabotaged his policies while demeaning those (like Jeff Sessions) who actually supported his alleged agenda.

Simply put, Donald Trump is a huckster, a master of the Long Con. He is without a moral center and possesses no shame. He has betrayed his base of support, the millions of white Americans who have endured physical and verbal abuse just for wearing a MAGA hat. He has turned his back on his supporters, some of whom have lost their jobs when it became known to their employers that they support Trump. He has done nothing to restore the First Amendment rights of his supporters when they have been banned from social media. He has done nothing to curb the power of the globalist oligarchs who continue to outsource American jobs abroad to cheaper and less qualified foreigners. Trump’s immigration sellout is a slap in the face to all the forgotten men and women who continue to be forgotten. Trump’s duplicity, mendacity, and treachery towards the people who elected him to office is so vile and revolting that it beggars description. I personally know an elderly woman on a fixed income who in 2016 scrimped and saved from her already meager food budget just so she could send five dollars to the Trump campaign because she believed that Trump was the first person in her lifetime who spoke for the needs of the white working class. In this instance, Trump’s immigration sellout is nothing less than a cynical exploitation of an elderly person, a sweet and innocent soul who probably skipped a couple of meals because she wanted to do something to support a man she thought would bring about a better world for her grandchildren. How is Donald Trump any better than Bernie Madoff? Madoff just conned you out of your money. Trump has conned white Americans out of a better world for their children and grandchildren.

It was always difficult to reconcile one’s support for Trump. The tweeting got old fast, the whoring showed a lack of taste as well as a lack of morals and self-control, and the Brooklynesque braggadocio and vulgarity has never traveled well west of the East River. Yet, there was always the idea that if we just held our noses a little while longer and gave him another break, Donald Trump would produce results. Because he’s a winner. He’ll tell you that, and so will his ghostwriter.

Well, Donald Trump isn’t a winner. But he’s not exactly a loser, either. What Donald Trump really is is a liar. He lies constantly, and he lies about everything. His mendacity knows no bounds. He is reprehensible and vile. He is a gamma male with an alpha male mouth. He is a huckster, a con artist, a grifter, a side-show hawker, a snake oil salesman. By his actions, he has abused, taken advantage of, and exploited his working class base of supporters. He has delivered nothing. Indeed, he has made matters worse. In the next century, when the remnants of what used to be Western civilization are hiding in caves in order to preserve the last few books and artworks from destruction by the marauding barbarians, Donald Trump’s betrayal of his base will be spoken of in terms once reserved for Benedict Arnold and Judas Iscariot.

Donald Trump does not deserve impeachment. The only punishment fit for Donald Trump is eternal damnation in the Ninth Circle of Dante’s Inferno. And the even sadder thing is that Trump stands a very good chance of getting reelected, because the Democrats are even worse.