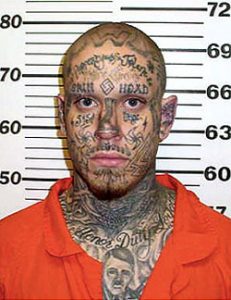 An example of what not to do.

In the first part of this series, I described my concerns for young people who identify as white and who are beginning to understand that they are being crowded out of the nations their ancestors had built for them. It’s an uncomfortable situation to be in, and will only get worse as white majorities continue to dwindle worldwide. Anticipating that this crisis will come to a head at some point, I am offering advice to young whites to help them better understand their crucial role in the upcoming turn of events – which will most likely go against them if they don’t start preparing for it now.

3. Be Wary of Non-Whites

If you wish to become educated and successful by making use of mainstream institutions, then you will be surrounded by non-whites. Of course, you should always be polite and cordial to them. At the same time, however, you should follow the advice of Alex Baldwin in Glengarry Glen Ross: “Always be closing,” or ABC. We should always be thinking of our ethnostate, our endgame – the time when we will finally break away from these people. Relationships with them, especially close ones, will make the inevitable break all that more difficult and painful. Best to avoid close contact with them early on and make it a habit.

To the unaccustomed ear, this may sound harsh. After all, why discriminate against someone for their race when that person might be perfectly nice and wish you well? That would be bigoted, wouldn’t it? Consider, however, that one is perfectly entitled to discriminate when it comes to friends and intimates for whatever reason one wants. It would be stupid not to do this, and we are not yet at the point when whites will be persecuted for not having non-white friends or intimates. But that day is coming.

If we flip the script, we can respond to the bigotry claim by showing how passing judgment on someone for making personal decisions can also be bigoted. This certainly happens. Take, for instance, the Duke Three hoax from 2006, in which three innocent white Duke University lacrosse players were accused of rape by a black stripper. There were people on the Internet accusing the students of racism because they wanted at least one of the strippers at their party to be white. See? White people who believe white women are attractive are inherently racist and deserve abuse. This anti-white bigotry among our enemies will only gain traction over time.

Another thing to consider is the will to power, and the ability of the powerful to disguise it. When people of different races who don’t have the will to power interact, the encounter is usually positive. There is indeed a common humanity we all share beneath the skin. When racially disparate people meet under neutral circumstances – where they aren’t a threat to each other – the goodwill just oozes from all sides. Hollywood takes advantage of this sort of thing all the time, its most notable recent effort being The Upside: an inter-generational, interracial, feel-good buddy movie about a black ex-con who assists an older white paraplegic billionaire. This formula has been box office gold for decades now.

I feel it, too. The black man who did an exemplary job taking care of my grandfather in his declining years got nothing but respect and appreciation from me, and I meant every bit of it. Similarly, a few years ago, my wife instructed me to dispose of an old mirror in our basement. Much easier said than done. In the parlance of men, the thing was a fucking beast. It was a five-foot-tall, four-foot-wide piece of square glass that the previous homeowners had left us as a gift, apparently. I had to haul it up a narrow flight of stairs and all the way to the curb by myself without shattering it. Some of the edges were jagged. It was difficult. I thought of the garbage men, not wanting one of them to cut his hand or get a shard in his eye while handling the thing. So I went out there when they showed up and helped them put it in their compactor. They really appreciated my effort, and I really appreciated theirs. They happened to be black, but that didn’t matter. After a few high-fives and bro hugs, I wondered, why am I a White Nationalist again? Why do I want to separate from these people, as good as so many of them are? Surely, our common ties of humanity must count for something.

Well, they do, just not for much in the final analysis. Young whites must always be aware that, despite whatever positive vibes we get from non-whites, these vibes are the result of lacking the will to power. This is a consequence of diversity, and it often mesmerizes young people in the playground setting of college – but it almost never lasts. When these non-whites go home, they will almost invariably follow the lead of those individuals of their race who don’t lack the will to power. These people are certainly not our friends, and they don’t care if you helped their constituents dump heavy mirrors into garbage trucks. Power is a zero-sum game. Less power for whites means more power for them. This means they can never be trusted to act in accordance with our racial interests – and neither can their followers, our would-be friends on the upside. Nor should they. Exceptions exist, of course, but it would be unnatural for most non-whites to care too much about white people as a group. No amount of being nice to them is going to change that.

Once we realize this, it becomes much easier to keep non-whites at arm’s length – and more rewarding as well, since we’ll know in our hearts where our loyalties should belong.

This means not to place additional targets on yourself – targets that would make you easier to identify and attack. You will find as you get older that your white skin will be target enough.

White people, especially racially conscious ones these days, are being given less and less leeway in terms of their freedom of speech: we are insulted and derided in our media, we are discriminated against in almost all walks of life, we are blamed for all manner of historical crimes, we are shamed for taking pride in ourselves, our politics have been all but criminalized, and our legitimate racial interests are treated with the basest contempt. Meanwhile, non-whites, including Jews, do not suffer such indignities. It will only be a matter of time before we officially become second-class citizens in our own nations.

What our enemies tend to do is isolate our racial leaders and make them suffer. They hamper them with lawsuits, they undermine their ability to raise or earn money, they slander them as often as possible, and they harass them whenever they try to enter public life. Essentially, they make it all but impossible for them to live normal lives. This tactic serves the dual purpose of destroying the enemy while discouraging other whites from expressing their racial identity or acting in accord with their racial interests. This is partially what the Southern Poverty Law Center’s Hatewatch blog and extremist list is about.

Of course, we need resilient leaders who are committed to resisting this anti-white tide. Such people cannot and should not hide in plain sight. Jared Taylor, Kevin MacDonald, Mike Enoch, and Millennial Woes are great examples. But the rest of us probably should, however, since such resilience is extremely rare. It would be better for the movement if the enemy were less able to attack us, while we take the fight to them (more on that in the next part). So, no Nazi imagery, no sieg heiling, no Ku Klux Klan robes. No social media posts that would turn off potential employers. No torchlit nighttime marches. No crass racial epithets. No crass anti-Semitism. No prominent 1488 tattoos.

In fact, I would advise against easily visible tattoos in general, such as on the face, head, neck, and hands, since they could make it less likely for us to find the best and most stable employment. This works counter to the first item in this list: make yourself useful. Of course, exceptions exist – for example, business owners, military people, mixed martial artists, body art enthusiasts, and so on. Tattoos on women are perhaps an even bigger impediment. The best and most productive men tend to want “Debt-Free Virgins Without Tattoos [4]” for wives, at least according to Cheateau Heartiste. If a woman, especially a young woman, refuses to conform to this, she would be working counter to the second item on this list: be biologically successful.

I’m torn about Confederate imagery. I can see how the Stars and Bars can serve as a lightning rod for all sorts of grief and disapproval these days. Would such imagery on clothing or social media pages harm one’s chances of pursuing or keeping a career? Nevertheless, I sometimes wonder if Confederate imagery does more harm than good. On the other hand, Southern culture is indigenous to North America and comes from a very real place in our history. Many Southerners identify with their history and heritage – and they should. It’s not LARPing in the way adopting Third Reich imagery certainly would be. The Confederacy represents one of the few organized efforts in history to resist Progress through arms and to preserve a time-honored aristocratic tradition rooted in race and gender realism. That it almost won against far greater numbers and resources speaks to its greatness. Further, there’s more to Southern heritage than this, and a person identifying with it isn’t necessarily a dissident the way someone wearing a swastika would have to be. Therefore, I say that sporting Confederate imagery is fine, but only if you are prepared for the risks and only if you mean it.

Finally, we should avoid public protests and marches. Such tactics only work against a white establishment, since whites as a group tend to be highly individualistic and generous. The black civil rights demonstrations from the mid-twentieth century may have met with some white resistance, but most whites in America were sympathetic to the blacks. South Africa was similar. Enough white South Africans were moved by black demonstrations and protests to eventually bring about the end of apartheid. But let’s flip the script once more. Would black South Africans today respond positively if the oppressed white South Africans were to protest in the manner of Nelson Mandela? Would blacks in America respond positively to a white Martin Luther King? Absolutely not. The very idea is ludicrous.

Marching and protesting in the streets, and other forms of public dissent against non-whites, accomplishes less than nothing. Not only is it perfectly futile and a waste of resources, it also weakens our hand by allowing our enemies to see our cards. Most importantly, it belies a fundamental misunderstanding of the nature of our enemies.

There will be more on the nature of our enemies in the next part.

Spencer J. Quinn is a frequent contributor to Counter-Currents and the author of the novel White Like You [5].