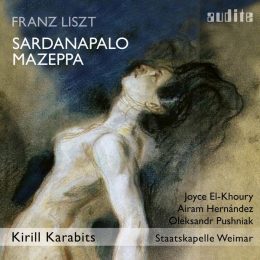 Franz Liszt began composing an opera to an Italian libretto based on Byron’s tragedy Sardanapalus in 1849. Having retired from the concert stage in 1846, he hoped to establish himself as a serious composer by writing a large-scale opera that would rival the works of Rossini, Verdi, and Wagner. But he abandoned the project in 1851 after having completed only the First Act. The manuscript lay undisturbed in an archive for nearly one hundred seventy years, until English musicologist David Trippett undertook the task of reconstructing it three years ago. The world premiere took place in Weimar, Germany on August 19, 2018, and a recording was released last week.

Other operatic subjects entertained by Liszt during the 1840s and ‘50s included Byron’s The Corsair and Manfred, Dante’s Divine Comedy, and Goethe’s Faust. The latter two were reimagined as symphonic poems. None of his operatic sketches were finished, though Sardanapalo came the closest to completion.

Liszt’s reasons for abandoning the opera are unclear. It is possible that he was swayed by Wagner’s criticisms of Italian opera, but the more likely reason is that the process of procuring a libretto was fraught with delays. Liszt first approached a French playwright, Félicien Mallefille, to write it. After Mallefille missed his deadlines, Liszt agreed to Princess Cristina Belgiojoso’s suggestion to have an anonymous Italian poet and political prisoner write it; the libretto was completed eighteen months later. Liszt requested revisions to the libretto but never received the revised version. He was also busy with several other projects at the time, and Belgiojoso (who edited the libretto) was heavily involved in the movement for Italian independence.[1]

The manuscript is one hundred eleven pages long and is scored for voice and piano, with instrumental cues. It was long deemed too fragmented and indecipherable to warrant reconstruction, but a closer analysis showed that the work formed a complete act with continuous vocal parts. Trippett realized that the gaps in the piano accompaniment did not signify incompletion but rather represented certain recurring passages that Liszt did not think necessary to rewrite.

The First Act consists of four scenes: an introduction featuring a chorus; a scene with a soprano aria; a scene with a duet for soprano and tenor; and a finale for soprano, tenor, and bass-baritone. Musically, it is an interesting blend of bel canto and Lisztian/Wagnerian chromatic harmonies.

The characters in the opera are Mirra, a Greek slave girl and favorite of Sardanapalus; Sardanapalus himself, ruler of Assyria; and Beleso, a Chaldean priest. The setting is the King’s chamber in the royal palace at Nineveh, circa 650 BC, shortly before the fall of the Assyrian Empire. (Elements of the Sardanapalus legend correspond to events that occurred during the final years of the Assyrian Empire, namely the rivalry between Ashurbanipal and his brother Shamash-shum-ukin, but the character is mostly fictional.)

The act opens with a chorus of Sardanapalus’ concubines beckoning Mirra to join them and be of good cheer. Mirra is despondent, mourning her exile from her homeland. She has fallen in love with the King and laments being torn between loyalty to her homeland on the one hand and love for her captor on the other.

Sardanapalus enters, and Mirra confesses her love to him. He reciprocates the gesture and promises to furnish her with luxuries. Sardanapalus is womanish and lazy, and his main pastimes are feasting, drinking, and sleeping with concubines.

Beleso then bursts in and reprimands Sardanapalus for indulging in women and luxury instead of fulfilling his duty:

While the insurgent leaders ready their arms and move the commoners against you, you do not hasten to your duty? You still spend your life in leisure? No thought of yourself, of your people, occurs to you and you drug them into soft ease? And you do not hear the inner voice of duty? Oh famous shades of the kings of Assyria, omnipotent Belus, who for glorious deeds holds a place in the forefront of the eternal elect, witness the error of a successor of yours: forgetting the sceptre for a base slave mistress.

Beleso urges Sardanapalus to “set aside the distaff, grasp the sword,” but he refuses. He claims that “glory is a lie” and that he would rather win over his enemies with “mercy” and “forgiveness.”

Mirra, perhaps having lost respect for Sardanapalus, tries to persuade him to fight. He relents, though only because it is her wish. The act ends as the royal troops are preparing for battle.

In Byron’s version, Sardanapalus’ initial unwillingness to use force to defeat his opponents is his undoing. He pardons the satraps seeking to overthrow him, and they proceed to lead their troops into the city. The Euphrates floods, and the city walls are destroyed. Finally, Sardanapalus and Mirra (“Myrrha” in Byron’s poem) burn themselves alive. Liszt planned to include a similar ending, and said that his finale would “even aim to set the audience alight!”[2]

The cast is excellent: Joyce El-Khoury as Mirra, Airam Hernández as Sardanapalus, and Oleksandr Pushniak as Beleso. El-Khoury nails the virtuosic soprano role. 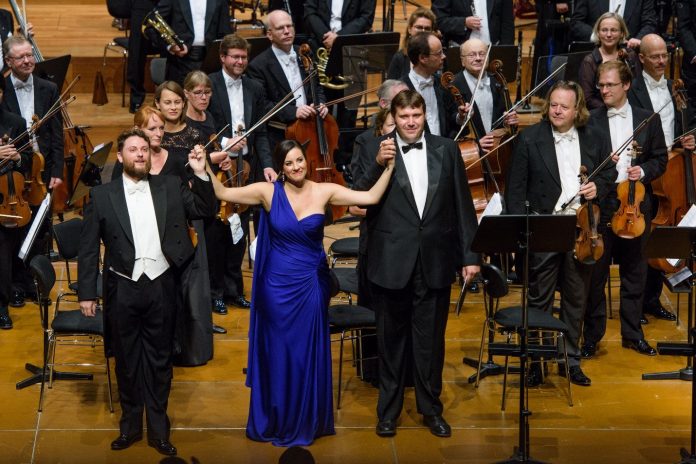 Airam Hernández, Joyce El-Khoury, and Oleksandr Pushniak at the Staatskapelle Weimar for the premiere of Sardanapalo

The first track on the album is Liszt’s symphonic poem Mazeppa, which was written at about the same time Liszt abandoned Sardanapalo and also evinces his ambition to synthesize music and literature. He also wrote an etude for piano under the same name (Transcendental Étude No. 4). Both are based on a tale about Ivan Mazeppa, who served as Hetman of Zaporizhian Host in the late seventeenth century. Mazeppa fought for Ukrainian independence and is considered a Ukrainian national hero. His image appears on the ten hryvnia bill, and there is a national award named after him.

According to folk legend, the young Mazeppa had an affair with a Polish countess while serving as a page at the court of King John II Casimir. When her husband learned of the affair, he punished Mazeppa by tying him naked to a wild horse and letting the horse loose. The horse eventually fell to the ground, and Mazeppa’s unconscious body was found by a band of Cossacks. The rest is history.

The work opens with a flurry of notes depicting Mazeppa’s wild ride, the strings evoking hoofbeats. A bold brass theme is soon introduced.[3] Mazeppa’s eventual fall is indicated by a loud chord. The music slows down, and he cries out. Then he is suddenly awakened. The piece concludes with a march signifying his triumphant return to his people.

The contrast might not have been intentional, but it is interesting to compare the subjects of the two works. The effeminate and slavish Sardanapalus is the embodiment of a dying civilization, while Mazeppa embodies the fighting spirit of nationalism. It is hard to think of a more fitting comparison.

[3] The theme appears in the 1935 pirate film Captain Blood. Erich Wolfgang Korngold wrote its soundtrack and had only three weeks to compose the score, and he recycled some themes from Liszt’s symphonic poems.

« The Greatness & Decay of France

» Socrates Versus the Bugmen