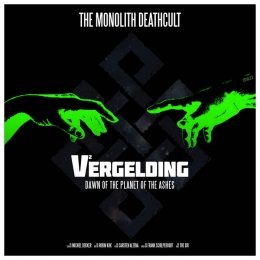 The Monolith Deathcult are a three-piece extreme Death Metal band formed and led by Dutch high-school history teacher, Michiel Dekker. TMDC is a one-band musical vanguard for the coming inevitable National Populist cultural explosion of the European New Right. Their music, whilst incredibly varied, complex, catchy, and listenable in its own right, is used by Dekker as vehicle to deliver a scathing critique of extremist ideology and historical atrocities. Dekker’s particular fascination with 20th century terrorism and genocide, often against Europe and Europeans, provides an impregnable core of White racial self-consciousness within the Deathcults’ music.

Synergistic with astonishingly creative, contemporary, and dry art direction, TMDC demolish their musical and cultural opposition like a hijacked bulldozer levelling a Diversity seminar. The Schwartze Sonne emblazons Versus, the first of the tragic trilogy, where the headline track describes an alternate history where the National Socialists activate nuclear and occult weapons, awaking “Furious Gods” with a “Nazi Bell from Hell,” a “doom machine beyond imagination.” Elsewhere, a computer-generated bust of Stalin revolves in a lyric video about the “faceless drones” of the Red Army exerting genocidal vengeance, the accompanying lyric booklet containing excerpts from Ilya Ehrenburg’s infamous 1942 leaflet, “Kill!”

Unleashing more Shock-and-Awe entertainment than the televised invasion of Iraq, the Deathcult package historical notoriety in pop-cultural trappings to mock, insult, and twist the motivations of the perpetuators of these abominable crimes: The outrageous track of “Drugs, Thugs and Machetes” outlines the motivations behind the Rwandan genocide over a beat of African war drums, the stunning outro of anguished guitar wails returning to a chorus hook of a Harry Potter quote from the house of Slytherin: “Pure Blood Traitor!” The outstanding, bombastic opening track of “Gods Amongst Insects” (on Tetragrammaton, the album name being a reference to the four-letter abbreviation of YHWH — “we needed a word that meant something to do with ‘four’ without actually being ‘four’.” — TMDC) finishes with the signature quote from the film Independence Day: “What is it you want us to do?” “Die . . .” 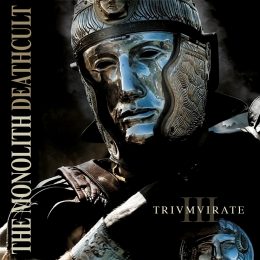 The Deathcult’s unique sound of chugging and grinding riffs layered with electronic breakdowns and orchestral grandeur, “Stalin organs, sonic booms and mammoth orchestral stabs” interspersed with pop-cultural killshots, came about at their turning point as a band with the production of Trivmvirate (sic), their third album (“Triumvirate” being a term from the Roman Empire to refer to three notable men holding power). This 2008 offering garnered critical acclaim and marked their departure from “True” death metal. In the words of Angry Metal Guy, their first two albums “offer some standard Death Metal before they veered onto an electronic side-road”[1] in pursuit of their own creative vision.

Trivmvirate opens with a haunting electronic melody before exploding into an all-out cosmological war of ancient Gods returning to earth, with follow-up track “Wrath of the Ba’ath” elaborating on a flattened, machine-altered chanting of  “Wah-da! Hurriya! Isht’rikaya! Halabja!” the Ba’athist party slogan of “Unity, Liberty, Socialism” and Halabja, the site of Saddam’s chemical attack on the Kurds. Expanding Russian tragedy into grandeur, the expansive, rumbling strains of “Den Ensomme Nordens Dronning” weaves the US Naval hymn (complete with a sample borrowed from the Crimson Tide film soundtrack) with Antaeus of Greek tragedy: “TMDC are referring to the naval exercise of the K-141 as a prideful overindulgence that cost the lives of under-prepared and under-equipped sailors.”[2] 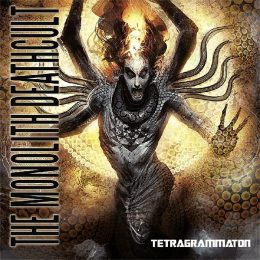 The Monolith Deathcult have pursued this thread of historical commentary, genre-defying unorthodoxy in musicianship, and an obsession with sonic and subject heaviness through their five main releases over the past decade, Triumvirate, Tetragrammaton, Bloodcults, Versus, Vergelding. The Deathcult have evolved through borrowing from movies to critique extremist ideology into adopting voice actors to transform real massacres into sly, knowing fables — Peter Cullen, the voice of Optimus Prime from Transformers, provides the final statement on “Aslimu,” a sarcastic homage to the Muslim Brotherhood’s murderous influence in the so-called ‘Arab Spring’: “It is time for the slaves of the earth to recognise their masters.”

Finally, the Deathcult have become characters themselves, enlisting voice actors to narrate their travels through the netherworld, “as the light of the sun returns, so will The Monolith Deathcult, to smother all living things in their wake.” The percussive strains of sonar pings, otherworldly choirs, helicoptering electronic hooks, brutal riffs, and tortured down-tuned guitar wails from Triumvirate onwards create a primeval and unforgettable sound. 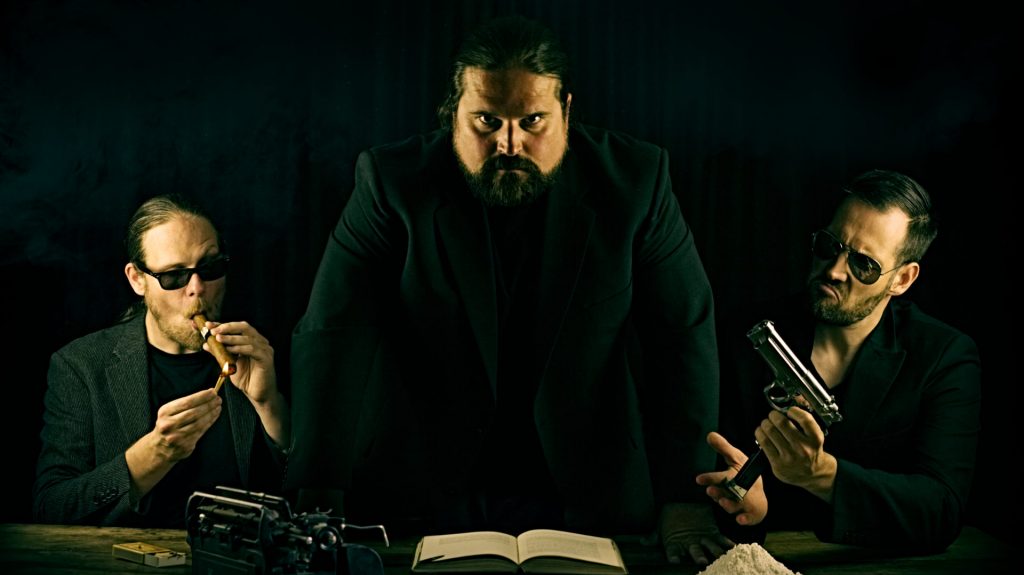 Nearly every song is written from the perspective of genocidal maniacs and peddlers of mass death — the one song where the Deathcult write as themselves, “Supreme Avantgarde Death Metal,” they describe their music as “another way to push atrocity unto mankind.” The zealotry and fanaticism of war criminals, murderers, rapists, torturers, and suicide bombers (“martyrdom looming on the event horizon”) is adapted and assimilated into a Kulturkampf against them, a no-holds-barred historical examination and analysis of atrocity. Brutality is bent back on itself. The power of the perpetuators beliefs is framed within the Deathcult’s use, abuse, and pop-cultural mockery of it. The Deathcult’s assimilation of atrocity is an empowering process — through the band’s relentless energy the listener can come to terms with the undiluted psychosis of the subjects, and join the “vile assault” against “soporific mediocrity” and the abominations it results in.

The last track the Deathcult have offered — “Rise of the Dhu’l Fakar” — returns the Deathcult to extremist Islam, in this case the “Brides of Allah”’ and the Chechen terror campaign against Russia. Blastbeats compete with a chaotic riff, and triumphalist guitar work underscores paraphrasing of Stalin: “You showed yourselves to be weak, and the weak get beaten!” Banshee wails rush together with frenetic female chanting into an electronic and orchestral breakdown, and the voice of Optimus Prime returns to declare once again that “In those days men shall seek death and shall not find it. They shall desire to die, and death shall fly from them.” The Deathcult take a new vocal tack of speaking almost directly to the listener with a voice flat and deadly: “Strap death to your body and wreak mass havoc — spill blood like a river with a merciless attack.” The Dawn of the Dhu’l Fakar, and triumph of the derangement of Islam is concluded with the clicking off sound of a television set — as neatly expressed by the triangle warning sign of a woman in a Niqab exploding, the lunacy the Deathcult invoke is condensed into being a hazard of modernity.

The real threat to the status quo is the Deathcult itself. Marauding, prowling, ‘a resurrected ghost of a paralysing nightmare, a vandal from another realm’, TMDC threaten to fully destroy the battered idol of racial panmixia with their critiques and counter-narrative of bloodlust, bloodcults and ethnic cleansing played out in service of “Furious Gods.” TMDC establish a “deathcultzone” where no-one is spared. Exposing post-war, genocidal terrorism of the Jewish Nakam group against German civilians and mashing it into a first-person-shooter lyric video akin to Doom or Quake on “Dawn of the Planet of the Ashes,” the “three-headed Death Machine” of Michiel Dekker (The Teacher), Robin Kok (The Doctor) and Carsten Altena (The Vegan), show the credentials and cachet of their metapolitical project and bring buried history to the extreme metal scene.

The Monolith Deathcult all clearly keep in great shape and look fantastic on stage, sporting long metal hair and rough beards, and wielding a weapons-grade perfection of their craft — TMDC are Viking warriors in the electronic age, plying an unending and merciless onslaught against the sacred cows of the West and unleashing musical bombast more alive, truthful, and interesting than anything the mainstream has to offer. White Nationalists, Identitarians, and National Populists should take note of their cultural leadership and supremacy, their brazen hard swerve away from the mainstream in pursuit of their own uncompromising vision. TMDC have become “an evil supernatural beacon” for counter-cultural forces sweeping away “fawning left-wing cant.” Heavier than a nuclear submarine, more grandiose than Soviet parades, and as savage as razor blades in cereal, “The Monolith Deathcult is still alive . . .” and it is through these things we live forever.