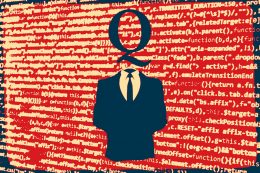 I’m sure by now you’ve heard of Q. A member of the United States government with Q-level clearance, who posts on /pol/ with a tripcode to keep anons appraised on the implementation of “The Plan,” which he reveals in vague, cryptic sentences, but bright heads have concluded to provide for the arrest of Hillary Clinton and other persons deserving of arrest, as well as draining the swamp, defeating the deep state, et cetera, a plan long in the making by so-called good guys in the government, to be implemented against a vast left-wing conspiracy to destroy the US. He doesn’t really want much of you — he just implores you to trust the plan. Sessions will be activated any day now. Of course, Q also drops false info because black hats — bad guys — are listening in. Who the hell knows. It’s very cloak and dagger.

Is the snark excessive? I think it should be evident from the above paragraph that I’m a Q skeptic. Still, I’ve never shied away from a riveting whodunit. Well, except it’s not exactly a whodunit. We already more or less know whodunit. It’s more accurately described as a howcatchem, a boilerplate plot of decidedly low-brow American television which has regretfully been replicated by many European production houses. My veddy, veddy patrician eyebrows furrow in disdain. Our reptilian overlords have turned the simulation into an episode of The X Files.

Predictably, boomers, as befits contemptible consumers of degenerate television and loyal MAGApedes have lapped it up and are now wearing QAnon shirts to Trump rallies. I guess it is comforting to them to believe that there are good guys in government who will lock the black hats up.

But on with the show. The premise is this: There existed a 16-year plan to destroy America(!), cooked up by The Cabal of globalist satanists, including but not limited to George Soros (!), John Podesta (!!!), the CIA (!!!) and the Muellers, Rosensteins, Comeys, Pages and McCabes in the FBI and DOJ. Phase 1 was Obama, who was to weaken America and subvert her good. Phase 2 was Hillary, who was to carve poor ol’ ‘murica like a turkey.

Problem is, the globalist satanists forget that ‘murica ain’t no turkey, but a beautiful bald eagle of freedom (eagle caws in the distance). Good guys in the government, chiefly very smart generals from Military Intelligence and the NSA have made A Plan which is in the process of being implemented. Step 1 was electing Trump, who is an agent of the very smart good guy generals. Step 2 is declassifying the evidence a good guy attorney general would need to drain the swamp and lock the bad guys up. Step 3 is actually doing that.

Every time you think Trump is bogged down, that the swamp is draining him, that’s just 4d chess. You see, General Flynn, who’s in on the Q-coup (Qoup?), admitted a bunch of fake crimes in order to declassify data through a process called “greymail,” which is to say, declassifying data due to its entering the public record as evidence in a criminal trial. Once enough data is declassified, the very smart generals will Activate Sessions (which has as of recently been interpreted to mean dump Sessions and appoint Whittaker), who will lock ’em up. Good guys win, bad guys lose, ‘murica (fuck yeah).

Da Plan was supposed to somehow bear fruition on 11.11.2018. There was speculation that Q’s right-wing death squads of justice would descend upon the country and purge it of the ne’er-do-wells, Clintonoids, globalists, satanists, pedophiles, and assorted bad guys. Obviously, nothing happened, but that never stopped a good doomsday cult. The Qanon knowers are out there, knowing agent Mulder-like that Good Guys have a grip on things, and that the 11.11 date was meant to throw off the Bad Guys!

Well, the jig’s up, Q. We don’t need your fantasy scenarios. And yes, we’re more stolid than we were before the beard.

As I said, I don’t believe in QAnon. I don’t know if Q is actually Neon Revolt, concocting a convoluted scheme to sell shitty hats and shirts; an elaborate psyop concocted by the feds in order to have some unhinged boomer assassinate Mueller or other anti-luminaries of the deep state (and this generation of Herostratuses in waiting is very capable of such insanity); or just some guy trolling. Ultimately, it doesn’t matter to the Dissident Right whether it’s true or not. Even if real, Q is not our guy.

Do you notice a pattern here?

If, like me, you came to the dissident right through neoreaction, you’ll recognize the battle lines quite clearly. Q is describing the conflict between what Mencius Moldbug called the Red Empire and the Blue Empire.

Moldbug’s thesis is pretty simple. Due to the diffusion of power within the US government, it is not actually a single state actor, but two: the Red Empire, consisting of the Pentagon, the NSA, the Chamber of Commerce, M-I complex, and some of Wall Street, vs. the Blue Empire, consisting of the US State Department, the universities, media, Hollywood, Silicon Valley, most of Wall Street, and a little bit of everything else. These two forces are engaged in a cold war against one another.

They also have various overseas satrapies. The lands of Western Europe are bar none, satrapies of the Blue Empire, whereas the Red Empire has client states in Israel, Pakistan, Japan, Indonesia, Taiwan and South Korea. Red China is an interesting case of a Blue Empire satrapy which became independent, but still caucuses with the Blue Empire for old times’ sake and other interests, at least some of the time.

I think that it’s quite clear that Q, if he speaks the truth, is an agent of the Red Empire and that the past 10 years have seen a warming of the cold war between Foggy Bottom and Arlington. The Blue Empire tried to wipe out the Red with a one-two Obama/Hillary punch, overextended itself and got schlonged with a golden-haired pussy-grabber in the Oval Office.

Now, under the Trump presidency, the Red Empire is preparing to wipe out the Blue Empire, or perhaps deal it a blow so heavy that the Blues won’t be able to recover. Maybe they’ll succeed. The Blue Empire’s superstructure for the governing of the European continent, known as the EU is tearing at the seams. Maybe the Trump election bloodied the nose of the Blue Empire and its enemies in Europe can smell the blood in the water.

Do you believe in coinkidink?

It’s easy to fall into this trap of thinking that the enemy of your enemy is your friend. Among the merry band of wrongthinkers I communicate with, the idea often crops up that whatever ill befalls the Blue Empire is good for us. Per analogiam with South Park’s Matt Stone, we hate conservatives but we really fucking hate liberals.

But it’s easy to forget that the conservatives, the Red Empire aren’t the good guys.

We don’t support interventionism, Israel, cheap labor and low taxes for Chamber of Commerce types, or anything else the Red Empire wants. Let’s not forget that the Red Empire has no problem with white replacement. They can go play Caesar with brown soldiers just as well. In fact, they might prefer them — I doubt PFC Retardez will grumble about not signing up to guard the Euphrates rather than the Rio Grande.

Of course, the Boomers looove the Red Empire. So do the normie-cons, in fact, Red Empire ideology is the right for normie-cons. But the Dissident Rightist would be well warned not to rejoice over one faction of the ruling class triumphing over the other.

Which brings us to the question of why Q? What’s the point of this thing, if true? I suspect the Red Empire wants to use us as, as the prophetic Sargon of Akkad called us, huwhite naggers, which is to say, in the same manner in which the Blue Empire has used the naggers classic — as a battering ram against the social consensus.

If the Q narrative is true, we’ve already done a good deal of free work for them. The Blue Empire is apoplectic over the election of Trump, for religious reasons. We helped elect the brave boy, and they’re pissed. Some of the heat that’s usually saved for the Red Empire is directed towards us and our very existence makes the blues act crazy. That means mistakes and bad optics. Maybe Q is there to keep tabs on us. To poke us and observe our reactions. Maybe he’s trying to build an army out of the Dissident Right by convincing us that he and the Red Empire are on our side.

Do you believe in powerful friends?

Suppose Q and Trump and the very clever generals succeed, lock her up and root out the globalist satanist pedophile cabal (aka the Blue Empire). What do you think will happen next? Well, obviously, a Red Empire-dominated government would purge the shit out of us. Remember that these are people who base their existence on interventionism, Israel, open borders, free trade and corporatism — all tenets which the Dissident Right opposes (with a vengeance). They’ll probably purge the shit out of us. Bear in mind that these are military types. The Blue Empire deplatforms. The Red Empire runs drone sorties.

Unfortunately, the Deep State must be defeated in its entirety, both its Right and Left wing have to be broken, both empires destroyed before a sane, pro-heritage American government can be installed in the US and non-satrapic governments can emerge elsewhere. Q will not fight this battle for us.

I remain a Q skeptic. I don’t think Q is who he says he is. But if he speaks the truth, then we’re in for interesting times ahead. If the cold war between the two empires on the Potomac heats up, the entire world will be up for grabs, and whoever wins will finish us off after the conflict.

Do you believe in doomsday scenarios?

« The Counter-Currents 2018 Fundraiser
It’s All Or Nothing, Again!