Overcomer to the End:
The Return of Brother Stair 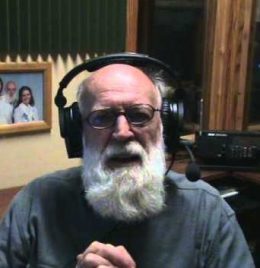 After spending a restless night after reading the latest productions of the Dissident Right, I sought solace, at around 4 AM, in one of my favorite entertainments: radio preachers. I was listening to some Jamaican rabbiting on about how important the support of his Brooklyn ministry was when there was a burst of static, a few moments of fuzziness, and then – suddenly – the unmistakable voice and teachings of Brother Stair!

Dog of Flanders! Had contemplating the ongoing chaos of the former Alt Right caused my already finely-strung sensibility to snap, like Dr. Mabuse himself?[1] Had a rip developed in the space-time continuum, as some have speculated happened on 9/11?

When last we were discussing Brother Stair, he had just been hauled out of the “radio room” at his end-times compound – from which “The Last Day Prophet of God is reaching every nation in the world with the message he has preached faithfully for over forty years . . .” “Jesus Christ is Coming in Your Lifetime! This is the Last Generation . . . The Last Hour . . . Prepare to Meet your God!” – by agents of the secular arm of the state, to face apparently unanswerable charges of grotesque child sexual abuse.[2]

And yet here was the unmistakable Brother Stair, announcing the End Times, promoting his farm community/compound, and – always my favorite part – bitterly mocking, Fred Sanford-style, anyone who dared to voice a doubt or question.

As I mentioned in the previous essay, Brother Stair maintained his dominance of the airwaves by leveraging the needs of shortwave and AM stations to fill endless timeslots with paid programming; indeed, this was how I leveraged the essay itself, using Brother Stair as an example of what the “Alt Right,” as it was then known, could do by insinuating its message into willing outlets. I reasoned, somewhat implicitly, that while outlets like Facebook and Twitter were superficially for-profit outfits, they were run by virtue-signalers who would deplatform anyone to the Right of Hillary at a moment’s notice; not so the hardnosed and desperate retailers of radio time.[3] Unless the “Alt Right” became as poisonous as child molesting, it would be a safe niche.[4]

Such stations were usually computerized outfits, run remotely, and would ruthlessly cut off broadcasts at the precise moment an hour passed, insert a pre-recorded station announcement, and then cue up the next program – even doing so in the middle of a two-hour block, with the program continuing on as if the break was a glitch.

And such was this station, WSNR (which I thought of as “Sports News in Russian,” as during the 6AM-6PM block, religious programming was replaced with some kind of lugubrious Slavic ethnic news shows), whose broadcasts from Jersey City were my link to the outside world, from my Airstream trailer here in the Pine Barrens.

So I assumed some glitch had indeed occurred, and some old Stair broadcast, rattling around in the clouds, had intruded.

I finally reached blissful unconsciousness before much longer, so I never learned how long this had gone on; the Slavic muttering had long since resumed when I awoke. But overcome by curiosity, I fired up the long-dormant iPhone app offered on his Web page, and indeed, there he was – and references to current events showed that this was no rebroadcast from his immense archives; Brother Stair, like Charlie Parker, lives! Brother Stair was on the air!

My next step, of course, was to get on the Google, where I learned that for a mere seven hundred fifty thousand dollars, Brother Stair was out on bail in January and back at the compound – I mean, farming community.

About a month later, the parents of one of the victims were themselves arrested; this article includes the sort of mug shot all too familiar on the Alt Right scene.

And a month after that brought the death of Craig Mack, a long-dormant “rap star” that Brother Stair would occasionally mention, as if he was the John Travolta or Tom Cruise of the Overcomer Ministry. As GossipOnThis describes it:

In 2016, the rapper resurfaced in a Youtube video giving a testimony at a church in Walterboro, S.C. In the video titled “Craig Mack Testimony,” Mack raps about living a life of sin before devoting his life to the Lord at Overcomer Ministry. He also rapped about moving his family from New York to South Carolina so that he could be a full-time member of the church.

The church’s leader Ralph Gordon Stair (a.k.a. R.G. Stair) preached after Craig’s rap about him being found by God.

In another video, Stair is seen asking Mack “What did you do when you was in the world?”

Stair says, “And what are you doing now?”

“Righteousness!” Mack fires back before waving his hands and jumping up and down.

Stair also refers to Mack as a “boy” in the video and tells him he’s no longer a slave and now a servant of the Lord.

That last bit is especially interesting, as in our essay on the similarly unpersoned Milo,[5] we discussed the rather masochistic delight Christians take in being slaves of Christ, often disguised by mistranslating the Greek doulos as “servant”; we also began and ended with references to Pulp Fiction, starring . . . John Travolta.

Mack may not be as big as Travolta was/is/was, but he was big enough to bring mention of the Overcomer Ministry to the Washington Post, the Daily Mail, the NY Daily News, and even NPR. Typically, the Post and NPR are fairly restrained, concentrating on Mack, while the Daily Mail and Daily News use the story as a hook for a salacious “look inside” the “sex cult” run by Brother Stair.

As the Daily Mail puts it, it was:

[An] isolated and oppressed community, utterly dependent on Stair for the most basic provisions, and shamed and manipulated by the unscrupulous preacher addicted to pornography and accused of defrauding some members out of life savings to the tune of hundreds of thousands of dollars.

More shocking still, records show that Stair was implicated in the suspicious death of one adult member of his congregation and charged with illegally moving and burying the body of a two-month-old boy whose death ‘by violent means’ he did not report. The baby was believed by many who were present at the time to have been fathered by Stair himself.

One piece of evidence for the Stairs’ broadcasts being recent and not archival material is a new wariness of social media. Mack’s death is being blamed on Stair because, like many Christian fanatics, he forbids the use of hospitals or medicine. And you’ve already noticed the “back to the farm” meme.

But like all such fanatics, Stair picks and choses what aspects of modern life he favors: radio broadcasting and even satellites are okay, as they enable the Gospel to be preached to the whole world, thus bringing about the End Time (and also, along with credit cards and banking, efficient fundraising). Now, however, he’s added YouTube and Facebook to his list of agents of the Antichrist, though he was happy enough to use them to promote Mack’s membership. Perhaps this is connected with his recent self-inflicted problems; as GossipOnThis outlnes it:

Stair’s arrest came after he posted a video of him inappropriately groping a 12-year-old girl’s breast during a worship service. “I’m gonna touch them things till nobody else can touch them,” he said in the video. In another video on YouTube, a 16-year-old girl accuses Stair of molesting her over the course of five months, The Post and Courier reports.

Brother Stair faced similar charges of extreme sexual misconduct back in 2002, and survived.[6] One might think that with today’s concern – or hysteria – over pedophilia and the #MeToo movement, he would be a goner. I mean, look what they did to Milo, just for reminiscing about his own childhood![7]

But Stair, apparently, has access to powers far beyond even a Weinstein; according to this chap 14CenturyHood on Reddit:

I was listening in on Stair the other day, he was talking about how those people who got him arrested thought they had the authority . . . until Stair read them the word of the gospel that reminded them that he’s the head honcho or whatever, then they “cringed” before him. Goddammit Stair.

I suppose the Romans felt the same way about Paul. Once more, he seems to have proven to be a true overcomer.[8]

[3] Brother Stair also performed a service for shortwave listeners, as his constant and ubiquitous broadcasts served as a handy channel marker.

[4] Arguably, the subsequent antics of Heimbach, Milo, Spencer, and so on have made this a moot point.

[5] “Milo and the Miles,: reprinted in the second, embiggened edition of my collection The Homo & the Negro: Masculinist Meditations on Politics and Popular Culture; edited by Greg Johnson (San Francisco: Counter-Currents, 2017).

[6] In 2002, he was arrested on two counts of second-degree criminal sexual conduct after two women alleged he raped them on numerous occasions. He pleaded guilty to two lesser counts of misdemeanor assault and battery and was sentenced to time served.

[7] “Far-right activist Milo Yiannopoulos had debts totalling more than $2m (£1.6m) during 2018, according to documents put together by his former Australian tour promoters,” says Harry Cockburn, who should know.

An Esoteric Commentary on the Volsung Saga, Part VI »