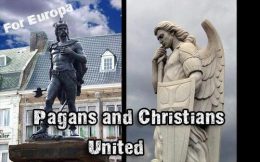 For decades, a series of perennially recurring schisms have taken place within the White Nationalist movement and hobbled it. Internal conflict ranging from economic ideology, to attitudes toward homosexuality, to religion has been detrimental. One of these divides is the rift between “Christians” and “Heathens.” For the most part, like all things in this age of perpetual dissolution, the gap between ideological and religious beliefs – or lack thereof – is largely illusory and symptomatic of the specious logic of postmodernism, operating along the disintegrating continuum of critical theory.

First and foremost, White Nationalism as a concept, regardless of ideological interpretations or iterations, is premised upon the foundational tenet that all European people need our own ethnostate, so as to prevent our destruction by the legions of anti-white forces arrayed against us. In Book One of Rhetoric, Aristotle asserted that the purpose of all politics is twofold: deciding what is advantageous for the community as a whole, as well as what is right and just within it. Internecine conflict is not beneficial to the community of our folk as a whole, nor our movement. Moreover, the religious debate is diametrically antithetical to the strategic objectives of White Nationalism as both a political and metapolitical movement.

All the elements of the doctrinal constellation of White Nationalism is based upon the sociobiological reality of race. It doesn’t matter if one is Christian, Heathen, Hindu, or something else; only if one is biologically, and thus, for lack of a better term, racially white; there is of course a spiritual dimension as well, which will be discussed further on. Up until very recently, history, before it became a bastardized subject myopically concerned with the memorization of dates and the spreading of liberal-humanist propaganda, was used by our ancient forebears, most notably the Greeks and Romans, as a device to intellectually inform while simultaneously imparting the time-honored values of morality and wisdom. However, this type of history has another, more noble purpose. When history is conceptualized as the past made manifest through events, memories, and a shared sense of racio-cultural identity, it is made relevant to those in the present by the vessel of tradition.

In this sense, the concept of tradition isn’t some static, vulgarized stereotype urging those in the present to recreate the hollow material culture of the past, but a living, dynamic process which imbues those peoples and cultures within its scope with the ability to utilize the spirit of the past as a means to preserve the memory and identity of one’s folk in the here and now. More fundamentally, by contemplating the past and rekindling our connection to it through the knowledge of historical parallels, we can engender a sense of continuity which will allow for a strategy for the future. Along these lines, the National Socialist movement, a topic rapidly becoming verboten in many White Nationalist circles, has the potential to be quite enlightening, particularly as it relates to these schisms.

Contrary to popular belief, National Socialism was initially, at least, an extremely diverse ideological movement. The true power of National Socialism was its ability to transfigure and transform a variety of seemingly disparate ideological trends into one, cohesive ideological construct, based upon the reality of race. While being interrogated at Nuremberg, Dr. Franz Alfred Six of the Reich Main Security Office described early National Socialism as being a veritable mishmash of ideological constructs which “didn’t really mean anything.”[1] [2] Six states, “. . . there were the interpreters of Feder and the interpretation of Rosenberg, there was the Spann school, there was a Krieck school, West Ideology, East Ideology, there were those who supported a Germanic belief in God and positive Christians . . .”[2] [3] Savitri Devi, when attempting to describe the ineffability of National Socialism, said it best when she wrote, “Creation and destruction are one, to the eyes who can see beauty.”[3] [4] All of these seemingly dissimilar ideological trends were eventually merged together and subsumed into the biological continuum of race. By examining these similarities with our own situation, we may gain insights for the future. As Greg Johnson has written and stated on numerous occasions, white racial survival is all that matters, and as things stand, all else is inconsequential.

The conflicts slowly dissolving our civilization’s cohesiveness as a whole are similar to those destroying the white ethnonationalist movement from within. However, it is the ever-widening gap between European man and the divine that is particularly pernicious and earth-shattering. From ancient times until very recently, civilization was born out of the symbiotic relationship between man and the divine. All modern religions, whether Christian, pagan, or otherwise, have undergone what René Guénon referred to as a process of “solidification,” or secularization, which has severed the connection between man and the divine and led to a materialistic outlook. Etymologically speaking, the word “religion” itself, derived from the Latin religio, means “to bind,” or more aptly “to reconnect,” and in concept and praxis, religions seeks to rejuvenate and reconstitute this fundamental bond.

As Émile Durkheim first posited, religion is an integral component of civilizational solidarity which it achieves by encouraging social cohesion. However, when Durkheim wrote of religion, he described a unified, homogeneous religion at the national or civilizational level. For Durkheim, like many other functional sociologists and anthropologists, religion is a fundamental component of the human condition, and while the content of religion may vary between societies over time, religion will, in some form or another, always be a part of social life. But in the postmodern West, the cult of the individual has replaced the more traditional forms of religious and social life.

National Socialist Germany sought to curb the cult of the individual by revitalizing the Tönniesin concept of Gemeinschaft (community) and Gesellschaft (society), transforming it into a people’s community, or Volksgemeinschaft. The National Socialists executed a program of Gleichschaltung (coordination), which sought to synchronize Germanic culture with National Socialist ideology. Abstract values such as radical individualism, equality, and an ill-defined idea of freedom were jettisoned and replaced by substantive concepts like family, race, and Volk, which in turn became the highest forms of German values. Decadent and degenerative values, all of which have reasserted themselves since 1945, were replaced with traditional European values like loyalty, struggle, self-sacrifice, and discipline. Even more importantly, National Socialist ideology via the Gleichschaltung regenerated a debauched Germany by reasserting the preeminence of race and sociobiology in a newly recomposed Volksgemeinschaft.

In National Socialist Germany, race became the referential system by which all aspects of life were interpreted. History was reconceptualized not as some millenarian march towards utopian progress, but more accurately as a constant series of struggles over racial identity. Topics which were (and still are) schismatic, like economics and religion, were reinterpreted along racial lines. For example, a popular academic course in the SS officer schools, “Charlemagne and Widukind,” sought to bridge the axiomatic disparity between medieval Christianity and paganism. Charlemagne was presented as the providential hand of God, while his Saxon adversary Widukind was depicted as the last bastion of primordial “Germandom.” The Saxons suffered most gruesomely at Charlemagne’s hands when thousands were summarily beheaded, in an event which modern historians term the Massacre of Verden. According to the National Socialist ethos, Charlemagne acted as the providential Hand of God by exercising the highest form of a king’s sovereignty, as endowed by his divine ordination; what medieval Germanic rulers called Blutgerichtsbarkeit (blood-justice). This concept, more commonly transliterated as “high justice” in the English-speaking medieval world, was the symbol of God’s ultimate power, represented by the King, which is made manifest by his subjects: the people, or the Volk. Moreover, it was Charlemagne’s execution of Blutgerichtsbarkeit which, according to National Socialist ideology, was a Blutgesetz (law of the blood), which in turn was the precursor to the Blutschutzgesetzen (laws for the protection of the blood) as established by the Nuremberg Laws in 1935.

Of course, disagreement over ideological and religious issues never entirely ceased within National Socialist Germany, but it was conducted in a manner which recognized the essential reality of race and its primary role in endowing the Volksgemeinschaft with a sense of unity and stability. The genius of Western civilization is our people’s penchant for grandiose dialectics at the civilizational level. In Hegelian dialectics, it is the union of two opposites, of thesis and antithesis, and the nature of their relationship which catalyzes evolution through reasoned discourse. In the Third Reich, the dialectical nature of seemingly contradictory notions, as between Christianity and paganism, was spanned by the universal acknowledgement that the underlying force of life is biological race. All discourse and disagreement was permitted – unless it jeopardized the unity and stability of the Volksgemeinschaft. This is a principle which we White Nationalists would do well to adopt.

But this begs the question: Can race act as a spiritually unifying force? The answer is a resounding and emphatic yes. Julius Evola is often wrongly accused of being opposed to all forms of “racialism.” Evola articulated his views on race in two treatises that are monumentally important to understanding the totality of his thought: The Myth of the Blood and Synthesis of the Doctrine of Race. In both works, Evola criticizes racialism that is of an exclusively materialistic nature. Evola doesn’t discount the existence of biological race, and affirms that “fundamental [biological] differences” exist between all peoples, but correctly states that premising an ideology or a revolutionary movement upon “scientific” rather than “spiritual” racialism is patently absurd, given that it embraces the most degenerative aspects of modernity: egalitarianism and materialism, the two trends which are the enemy of all traditional civilizations.[4] [5] Evola’s racialism was “spiritual” in orientation, being radically inegalitarian and elitist in nature, following the metaphysical type of thinking articulated in his other writings.

This “spiritual racialism” transcends the modern – and postmodern – and embraces more robust and traditional dimensions, and is precisely the type of racialism which our movement requires. Despite the fact that the SS rejected Evola during the 1930s as a “Roman reactionary,” a similar type of spiritual racialism was embraced by a number of the Reich’s elite. For example, Karl Rudolf Werner Best, the Nationalist Socialist jurist, philosopher, police chief, and deputy to Reinhard Heydrich was initially skeptical about what he perceived as the “egalitarian trends” of the National Socialist movement.[5] [6] Like Evola, Best sought “a revolution from on high,” and it wasn’t until he realized that National Socialist ideology possessed an uncanny ability to synthesize a plethora of Völkisch and revolutionary ideologies into one cohesive force that he joined the Party.[6] [7]

As Europeans, by acknowledging the fact that we are all members of the same extended biological family, and in turn by transposing this acceptance of biological reality into a spiritual milieu, we will possess the preternatural ability to overcome the issues that divide us. If we possess the strength to embrace who we are, and in turn to acknowledge the diversity inherent in our people, from Christian to Heathen, socialist to capitalist, and so on, then as a movement we will be victorious in preserving the genetic and spiritual continuity of our civilization. If we fail to do so, then our blood line and genetic destiny perishes with us.