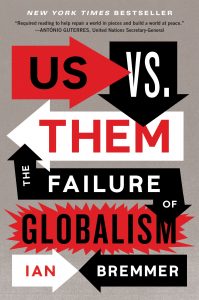 Ian Bremmer
Us vs. Them: The Failure of Globalism
Portfolio/Penguin, 2018

Glancing through the blurbs on the back of Ian Bremmer’s new bestseller, one finds the Secretary-General of the UN, a managing director of the IMF, a co-chairman of the European Council on Foreign Relations, the President of the International Rescue Committee, and Larry Summers: not a lineup one would expect to find endorsing a bold challenge to conventional thinking. And that is certainly not what we find in Dr. Bremmer’s book, although he is obviously a man of accomplishment.

Altogether, he gives the impression of a lifelong “model student,” piling up accomplishments through a combination of native gifts, hard work, and an absence of any disposition to challenge the conventional prejudices of his time.

Coming of age in the 1990s, Bremmer was not surprisingly sold on globalism,

a belief in universal interdependence and international exchange that seemed to provide paths to prosperity.…  Globalism seemed a generous choice; it’s the game everyone can win. Embrace capitalism, lower the walls, hire, build, and expand. People who’ve made it, or who believe they have a fair shot, are drawn to globalism. I devoted my professional life to it. Why not? The system worked for me, and it has lifted hundreds of millions around the world from poverty.

This appears to be true: World Bank statistics show that the fraction of the world’s population living in “extreme poverty” fell from 64 percent in 1960 to less than 10 percent in 2015. So, asks the author, why can’t globalism work for everyone?

In a word, because the rise of a new middle class in Asia and Latin America has come at the expense of the middle and working classes in developed nations. Consider the United States:

In 1970, middle-income households earned 62 percent of aggregate income in the United States. By 2014 their share had fallen to just 43 percent. The median wealth of these households fell by 28 percent from 2001 to 2013. Nearly 40 percent of US factory jobs have disappeared since 1979.

If you earn less than $10 per hour and work two or three low-wage jobs to pay your bills, you are considered “employed” even if you can’t make your rent. If you’re a construction worker who went unpaid last week because bad weather shut down your work site, you are considered fully employed. If you have a temporary or part-time job, you are counted as employed even if you have no benefits or even a roof over your head.

Most seriously, unemployment numbers only include those actively looking for work. Economist Nicholas Eberstadt has estimated that for every unemployed American man between the ages of 25 and 55 seeking work there are three who have either given up or found other means of subsistence. Drug use is extremely high among this class of men.

The benefits of globalism in America have been heavily concentrated at the top. By 2016, the top one percent of the population was earning 81 times as much as the bottom 50 percent, up from 27 times in 1981. The author notes, with understatement, that “the wealthy are unlikely to persuade those struggling to get by that their gains are entirely the result of superior talent and hard work.”

He also emphasizes that the increasing use of robotics and artificial intelligence in the workplace will exacerbate these trends over the coming decades.

The consulting firm McKinsey & Company has estimated that 73 percent of work in the food service and accommodations industries could be automated in coming years. More than half of jobs in the retail sector and two-thirds of jobs in the finance and insurance sectors are likely to disappear once computers can understand speech as well as humans do.

Another 2017 research study found that

industrial robots were responsible for as many as 670,000 lost [American] manufacturing jobs between 1990 and 2007, that this number is likely to rise as the number of robots quadruple in coming years, and that other sectors weren’t creating enough jobs to offset the losses in manufacturing.

One of the lead researchers observes:

There will be losers in the process, and it’s going to take a very long time for these communities to recover. If you’ve worked in Detroit for ten years, you don’t have the skills to go into health care. The market economy is not going to create the jobs by itself for these workers who are bearing the brunt of the change.

Outside the West, robotics and artificial intelligence will “sharply reduce the low-wage advantage that helps poor countries become middle-income countries. The youth bulge we see in many developing countries can move from economic advantage to political threat as their path out of poverty is blocked.”

Like other mainstream writers, Bremmer is most comfortable dealing with these sorts of economic questions, and the quality of his writing declines sharply when he turns to matters insusceptible of economic analysis. Politically he seems to be something of a fatalist, writing as if the continuation of mass immigration and terrorist attacks were inevitable and warning against politicians with “simplistic” solutions.

But not everything simple is simplistic. Repatriating Muslims and building a wall on America’s southern border are easy ideas to understand, but that does not mean they would be ineffective. Yet Bremmer blithely writes that Trump’s proposed wall “won’t keep out every immigrant who takes to the road in search of a better life.” No, but it might keep out 99 percent of them, as Israel’s border wall with Egypt has done. Or again, he writes: “ISIS, al-Qaeda and other militant groups will continue to target Europeans and Americans both at home and abroad.” They may continue doing so abroad, but they will have no opportunity to do so within the West if the West refuses to continue hosting them.

The author appears to assume that the populist movements he writes about will not actually succeed in replacing current globalist elites and instituting radically different policies. He pictures the future as rising popular anger met with more or less successful technocratic solutions by the same sort of overlords we have now. This sounds like a begging of the question.

The longest chapter in Us vs. Them analyzes the recent past and current problems of “twelve of the world’s most important developing countries: China, India, Indonesia, Russia, Turkey, Brazil, Mexico, Venezuela, Nigeria, Saudi Arabia, Egypt and South Africa.” The limitations of mainstream thinking become especially evident at this point. Bremmer simply has no idea why China is “globalization’s greatest success story” whereas Nigeria is “one of the few countries where the number of people living in poverty has increased over the past generation.”

Turning to South Africa, Bremmer believes that the 1994 handover to the ANC and its communist allies—which he calls “the transition to genuine democracy”—was “among the greatest human achievements of the twentieth century.” Yet here, in a nutshell, is his account of what has happened in the years since: economic growth has slowed dramatically, two-thirds of those between 15 and 35 are unemployed and violent protests are on the increase. The young lack even the most basic job skills, and the government has no money to do anything about it. Crime rates are among the highest in the world. Per capita income stands at just $5200, and inequality is greater than it was under white minority rule. Fewer South Africans even bother to vote and there is widespread cynicism toward the entire political class. The ANC is corrupt and the country “headed in the wrong direction.”

Some writers might be tempted to pause and reflect on how so magnificent an achievement as the end of white rule could lead to results so uniformly catastrophic, but Bremmer appears oblivious to the contradiction.

His thinking on the West is similarly conventional. He emphasizes that he is only interested in the popular movements represented by politicians such as Marine Le Pen and Geert Wilders, not in these figures themselves, suggesting he considers them beneath his notice. Of Europeans who fear their governments have ceded too much power to bureaucrats in Brussels, he says merely that “we can ignore” them. As for Donald Trump, he is “obnoxious, dishonest, and incompetent,” and his cautious initial response to the Charlottesville riots was a “defense of white supremacists.” Worst of all, he “has pitted Americans against one another for political gain”—as if all politics were not inherently conflictual.