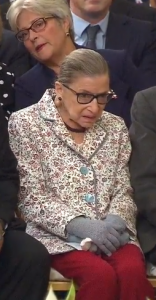 I had a talk recently about current events with a cuckservative friend of mine. He’s a Trump supporter, but not a particularly enthusiastic one. He recognizes that these days, all the good sense is found on the Right and all the crazy on the Left. But at heart, he’s a libertarian, and quickly gets prickly whenever I bring up race. So, usually, I don’t.

When the topic of Jewish Supreme Court Justice Ruth Bader Ginsburg’s recent fall [2], in which she fractured three ribs, came up, I made the offhand comment that I wished the old bird would die already. “Retire,” he corrected me. “I would prefer she retire. It’s never right to wish death upon anyone.”

As I felt the gears in my mind furiously cranking out all the reasons why I would prefer ol’ Ruthie McGinsbucket to just go ahead and kick it, I realized that I couldn’t share any of them with him. These are warlike thoughts, and my friend, bless his heart, doesn’t realize yet that we are at war.

My most powerful argument comes from a chapter in Jared Taylor’s splendid essay collection If We Do Nothing [3], which I reviewed [4] for Counter-Currents nearly a year ago. In “Brown v. Board: The Real Story,” Taylor recounts how the illegal scheming of two Jews played a major part in the fateful 1953 Brown v. Board of Education decision which ended the era of racial segregation in public schools and began the era of activist courts. The Jews were Justice Felix Frankfurter and his former clerk, Philip Elman, who was working in the Justice Department at the time. Of course, Taylor is too gentlemanly to bring up the Jewishness of these two villains (let alone draw any counter-Semitic conclusions), but since what they did was not terribly gentlemanly, I don’t think they deserve the benefit of anyone’s restraint. They certainly aren’t going to get mine.

As Taylor describes it:

In June 1953, the Court put Brown back on the docket and invited the new administration to file a brief. Eisenhower’s people wanted to stay out of the controversy entirely, but unbeknownst to them an agent for Felix Frankfurter was working at a high level in the Justice Department. Philip Elman had clerked for Frankfurter, and was in constant contact with his own boss about Brown. He told the Solicitor General that a Supreme Court invitation to comment on a case was like a command performance, and he offered to handle the case.

Elman and Frankfurter both knew that back-channel communications was wrong. A party to a case is never permitted to have secret discussions with a judge who will decide a case. In a long 1987 article in the Harvard Law Review, in which he described in detail the collusion that went into the Brown ruling, Elman conceded that what he did “probably went beyond the pale” but, he added, “I considered it a cause that transcended ordinary notions about propriety in a litigation.” He wrote that he and Frankfurter kept an appropriate professional distance on all other cases, but made an exception for Brown. To them, ending school segregation was so important it justified unscrupulous maneuvering.

Prior to this, Frankfurter had also instructed his clerk Alexander Bickel (another Jew) to “ransack the history of the [Fourteenth] Amendment in the hope of finding something that would justify striking down segregation,” according to Taylor. Frankfurter had done this without telling the other judges, which vindicates Taylor’s “unscrupulous maneuvering” charge and supports his claim that Frankfurter was “desperate to end segregation.”

Clearly, these three were living down to the anti-Semitic stereotype of the scheming, disloyal Jew, and doing so at an important time in history. To quote Counter-Currents editor Michael Polignano in his essay “The Browning of America” (found in his excellent Taking Our Own Side [5]), “[U]nless Brown and its legacy are swept away, some Chinese historian of the next century will write that Brown was the beginning of the end of the United States as a whole.” I agree with this assessment. After Brown, there were fewer and fewer legal obstacles towards the mongrelization of the white race and its civilization. There were good reasons for segregation and similar Jim Crow laws in America. They preserved the nation’s founding stock as well as the great civilization it inherited and towards which it contributed. They also helped to keep the peace, given the criminal nature of many blacks. Inherent to these laws was a confidence in the greatness of the people who created them. Blacks and other non-whites were lucky to live in proximity to white people, even in subservience, since whites treated them better than their own people did. Until Brown v. Board of Education, this was common knowledge across the white world and beyond. After Brown, things got complicated, and clearly became worse for whites in America.

But it isn’t this so much that makes me yearn for Ruth Bader Ginsburg’s un-mortal coiling. It was Taylor’s following paragraph (my emphasis):

In September 1953, something happened that completely changed the complexion of the Court: Chief Justice Frederick Vinson, a strong opponent of judicial activism, suddenly died. As Elman reports in his 1987 article, Frankfurter met him soon after in high spirits. “I’m in mourning,” he said with a huge grin. “Phil, this is the first solid piece of evidence I’ve ever had that there really is a God.” Elman writes that “God takes care of drunks, little children, and the American people” and showed His concern for America “by taking Fred Vinson when He did.”

Any self-identifying white should be offended by this. Further, knowing now that just a tiny bit of anti-Semitism in 1953 (by, say, keeping Jews off the Supreme Court) could have spared us the abomination of Brown v. Board of Education is a painful lesson, indeed. In keeping with this lesson, however, it’s only fair to ask in 2018 if it would be appropriate to show the soon-to-be-expired Ruth Bader Ginsburg the same respect that distinguished Supreme Court Justice Felix Frankfurter showed Justice Vinson. If Frankfurter had actually celebrated the man’s death and used it to rhetorically affirm his faith in a benevolent God while slipping a knife between the ribs of white America, then by all means, Ruthie, cash in your chips and buy the farm. Bite the big one. Pop your clogs. Turn up your toes. Put on that old six-by-two pinewood overcoat, baby, and buy a ticket on that last great train to glory.

Of course, there is no reason why we can’t be civil about this. I am not calling for foul play or criminal activity. I simply hope she dies peacefully and from natural causes in her sleep, surrounded by her loved ones. I hope she gets to say goodbye to each and every one of them and squeeze the little ones on the cheeks before her soul ascends to heaven on the wings of countless harp-playing angels in beatific epiphany, and takes her rightful spot at the left hand of God. I’m sure it will be a beautiful funeral.

Where the Notorious RBG would prefer such a scenario play out after Donald Trump leaves the White House, I, on the other hand, would prefer it happen tomorrow. Just a minor timing difference. Nothing more.

Seriously, even a cursory look at this woman’s history on the Supreme Court will reveal that she has opposed every single case that would have benefited whites as the major American demographic. It’s almost as if she has the same opinion towards white people that Frankfurter had. In 2003, she concurred with the Court’s decision in Grutter v. Bollinger which upheld the University of Michigan Law School’s anti-white discrimination policies. In 1996, she authored the Court’s opinion in United States v. Virginia, which ended the Virginia Military Institute’s male-only admissions policy, claiming it violated the Equal Protection Clause of the Fourteenth Amendment – the same Equal Protection Clause that she made sure no longer protects whites from affirmative action. That she was eroding the armed forces of a traditionally white nation by adding women to their ranks was an added bonus, I’m sure.

In Shelby Country v. Holder in 2013, she dissented from the decision to strike down the constitutionality of a section in the Voting Rights Act of 1965. Thanks to that, states with a history of racial discrimination in voting no longer have to obtain clearance from the federal government before changing their voting laws. This decision led to some states “implementing voter identification laws and becoming more aggressive in expunging ineligible voters from registration rolls,” according to Infogalactic [6]. This is an important measure in keeping illegal immigrants from voting as well as in rooting out corruption, and Ginsburg opposed it. Basically, she wants to make it harder for states to prevent illegals from voting and easier for black corrupto-crats like Brenda Snipes [7] of Broward County, Florida to allow felons to vote. Of course, these are two demographics which overwhelmingly vote Democrat and against the racial interests of whites.

Then there’s abortion. This vile creature has done everything in her power to make it as easy as possible for white girls and women to kill their fetuses under any pretext. Again, from Infogalactic [8]:

She discussed her views on abortion rights and sexual equality in a 2009 New York Times interview, in which she said regarding abortion that “[t]he basic thing is that the government has no business making that choice for a woman.” Although Ginsburg has consistently supported abortion rights and joined in the Court’s opinion striking down Nebraska’s partial-birth abortion law in Stenberg v. Carhart 530 U.S. 914 (2000), on the fortieth anniversary of the Court’s ruling in Roe v. Wade 410 U.S. 113 (1973), she criticized the decision as terminating a nascent democratic movement to liberalize abortion laws which might have built a more durable consensus in support of abortion rights.

Ginsburg was in the minority for Gonzales v. Carhart, 550 U.S. 124 (2007), a 5-4 decision upholding restrictions on partial birth abortion. In her dissent, Ginsburg opposed the majority’s decision to defer to legislative findings that the procedure was not safe for women. Ginsburg focused her ire on the way Congress reached its findings and with the veracity of the findings. Joining the majority for Whole Woman’s Health v. Hellerstedt, 579 U.S. (2016), a case which struck down parts of a 2013 Texas law regulating abortion providers, Ginsburg also authored a short concurring opinion which was even more critical of the legislation at issue. Writing for herself alone, Ginsburg asserted the legislation was not aimed at protecting women’s health, as Texas had claimed, rather Ginsburg asserted the law was meant to impede women’s access to abortions.

Yes, Ruth Bader Ginsburg doesn’t vote any differently than Justices Breyer, Kagan, and Sottomayor. But these three aren’t eighty-five years old and breaking ribs while falling. These people aren’t at death’s door the way Ginsburg is. Is it really wrong to actively wish for her death when Felix Frankfurter all but danced on the grave of Fred Vinson? Is it wrong to peg both her and Frankfurter as Liberal Diaspora Jews when these two have dedicated their careers to thwarting the interests of whites? In 1953, Justice Felix Frankfurter exhibited a warlike attitude towards whites when he did what he could end segregation. Can anyone blame whites today for having a similar attitude towards his successor in Ruth Bader Ginsburg?

Spencer J. Quinn is a frequent contributor to Counter-Currents and the author of the novel White Like You [9].