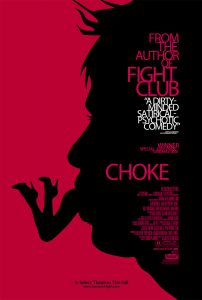 Chuck Palahniuk, most recently the author of the ethnostate satire Adjustment Day and known mainly for Fight Club, inspired another feature film with his 2001 novel, Choke. The 2008 film of the same name focuses on sex addiction, a timely subject in the current era of spiritual emptiness, which is one of Palahniuk’s recurrent themes. Intentionally or not, this dark comedy serves to repel the viewer from sexual deviance more effectively than any Christian sermon about sin.

Choke follows the adventures of the ironically named Victor Mancini, who is far from victorious at anything in life and not even legitimately part of the Mancini family. Kidnapped by an abusive single woman in his infancy, he never learns his true ancestry. While working as a colonial reenactor and attending group therapy sessions for sex addiction, Victor and his best friend Denny serve as an example of the ugliness of sexual degeneracy and the spiritual sickness inherently connected with it. 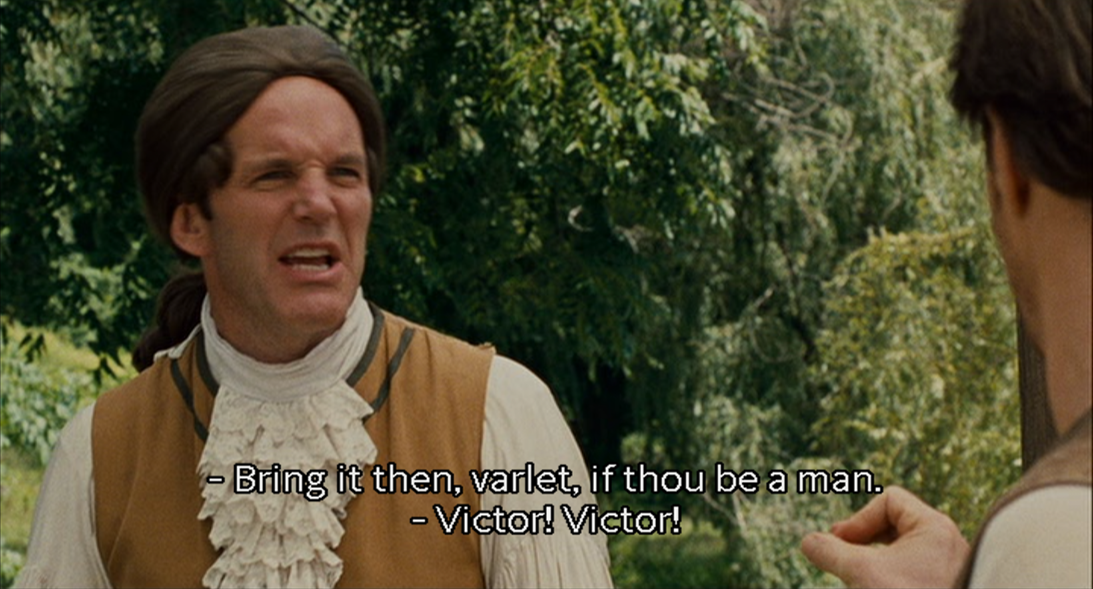 In line with his general lack of masculinity, Victor cannot “bring it” after idly threatening his supervisor.

Sex addiction, as the narrator explains, is much like drug addiction. Orgasms release endorphins, which, much like the morphine for which they are named, serve to kill both physical and emotional pain. This can be very desirable for those with unhappy lives like Victor’s, and can cause a dependence which is difficult to break.

Deficits and dysfunction in this area of the brain be connected to criminality and psychopathy, among other psychological problems. This is not to say that sexual deviancy simply turns people into criminals, but it is connected with the sort of mindset which is to be expected among prison inmates – of the sort which the film’s deviant protagonist displays.

Essentially, although causation may go in both directions, this type of behavior is toxic to the spirit. This is not meant in a metaphysical or religious sense, but in the sense intended by phrases such as “he has no soul” or “it broke his spirit.” In other words, it threatens to destroy what separates man from Antifa. The film does not quite put it in these terms, but it does imply that it turns Victor away from higher pursuits in life, particularly romance, thus keeping him from the fulfillment his best friend ultimately finds.

The title of the film comes from Victor’s habit of pretending to choke on food at restaurants. This allows other diners to “rescue” him and thus see themselves as his saviors, after which they send him checks and feel good about themselves. Victor uses the money to pay for his demented mother’s medical care, and it is during his visits to her in a mental institution that he meets his love interest.

Paige Marshall is a patient at the facility, although she impersonates a doctor in her dealings with Victor. Before even meeting him, she has fallen in love with Victor by listening to his stepmother’s stories about him. She goes to great lengths to convince Victor to see the good in himself, including leading him to believe that he is the half-clone of Jesus Christ. But even confessing her feelings for him on two separate occasions garners no response.

Victor is in love with Paige, as both his friend Denny and his mother point out, but is not man enough to admit it. This lack of courage is in line with his character in general, and is to be expected from his sexual degeneracy, which would drain his vitality and diminish his ability to make responsible decisions. 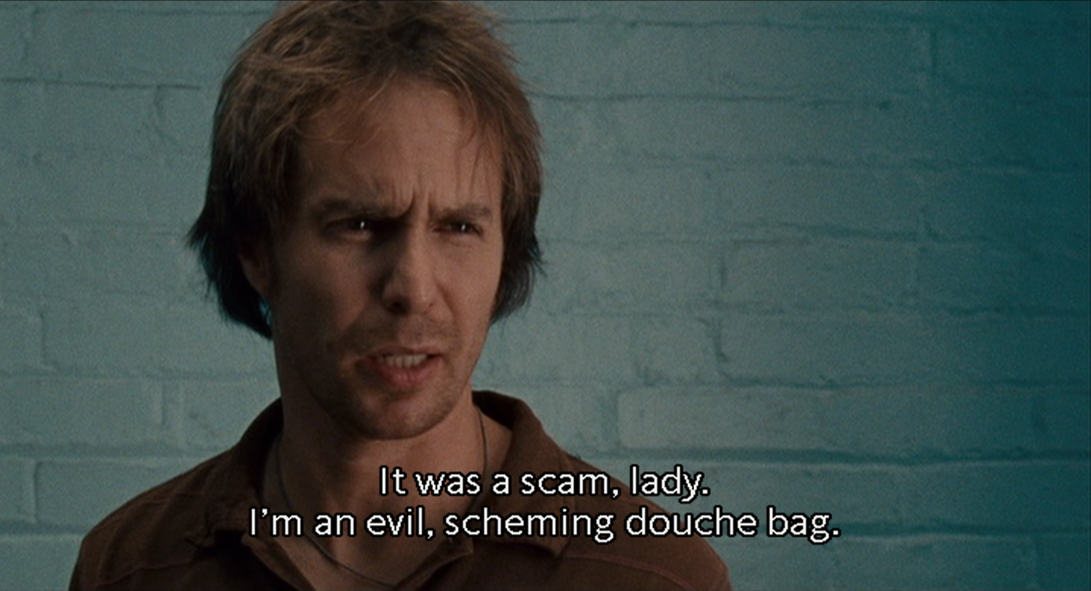 Victor objects to an old woman’s story of how one of his choking scams changed someone’s life.

The film gives another explanation for his cowardice, but one which similarly indicates the lack of spirit with which the West currently struggles. Victor wants to see himself as a bad person and is bothered by the suggestion that he is not. He even tries to distance himself from goodness by doing something that Jesus would not do, namely helping a strange woman live out a rape fantasy – but this is a disaster. 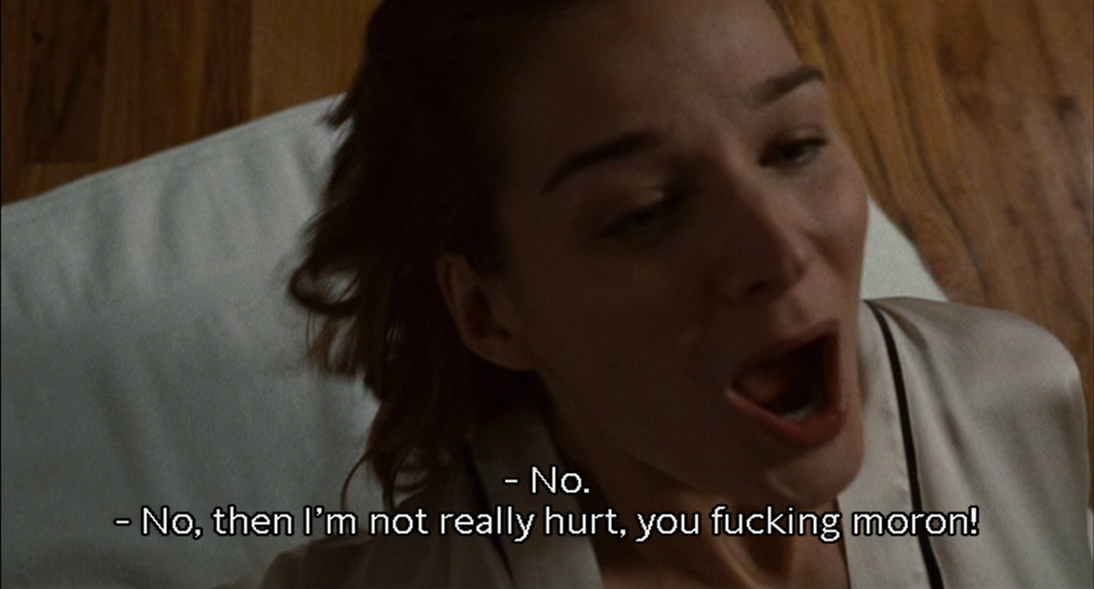 Victor’s date berates him for not raping her properly.

Over the course of the film, Victor has at least nine sex partners that we know of, and most of their experiences together are far from appealing. Victor is consistently unkempt and brutish, and several of his liaisons are unattractive, unwashed, and/or abusive. The woman with rape fantasies has very specific desires and repeatedly berates him for not raping her properly; the encounter is unsatisfying for both of them. One slovenly and resentful woman named Nico is so lacking in affection for him that she is offended by his attempt to kiss her. 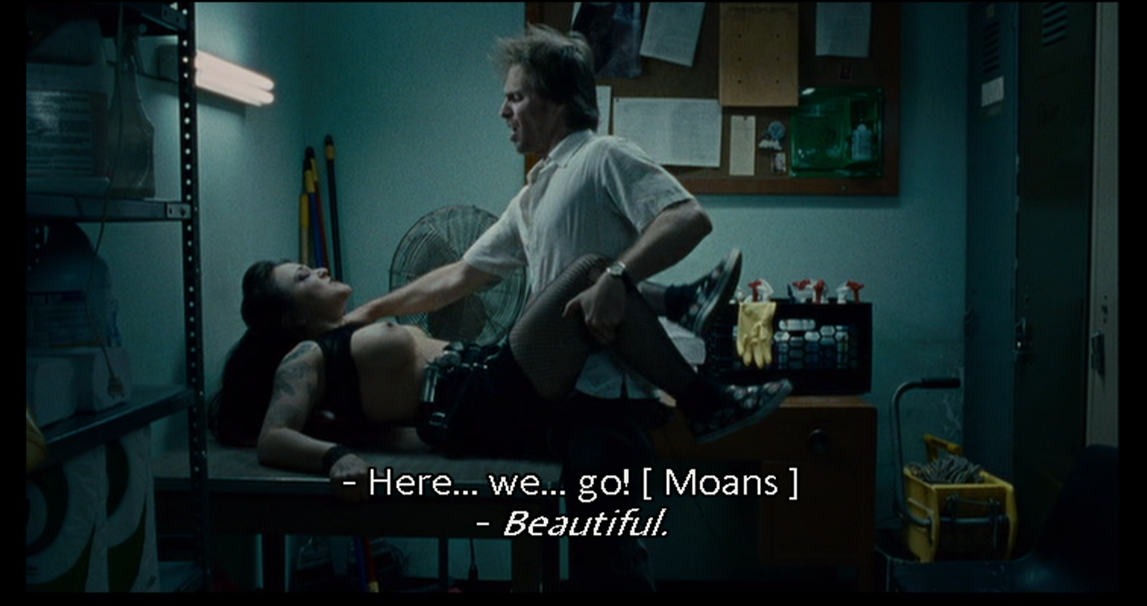 Victor copulates with an anonymous ogress in a janitor’s closet and calls this “beautiful.”

Not only is none of this romantic, it is not even attractive on the most basic level; the film manages to portray sex in a completely unerotic manner. Even when Victor claims that his experience is “beautiful,” his facial expression could more easily be taken as one of disgust or pain. He visualizes baseball – something profoundly unsexy – in an attempt to reduce his excitement during sex and avoid ejaculating prematurely, and much of the film itself could be used for a similar mood-killing effect.

Victor’s sexuality is so twisted that not only does it not include any romantic, procreative, or spiritual components, but he is actually repelled by these things. He has several encounters with Paige in the mental hospital’s chapel in response to her suggestion that they conceive an embryo which could be used for stem cells in a supposed experimental treatment for his mother’s dementia. During these encounters he finds himself unable to maintain an erection, attributing this afterwards to both his romantic feelings for her and the sight of Christ on a crucifix. Although no one ever explicitly states that his behavior is morally wrong, it is clear that he is as far as one could possibly be from the natural purpose of sexuality. 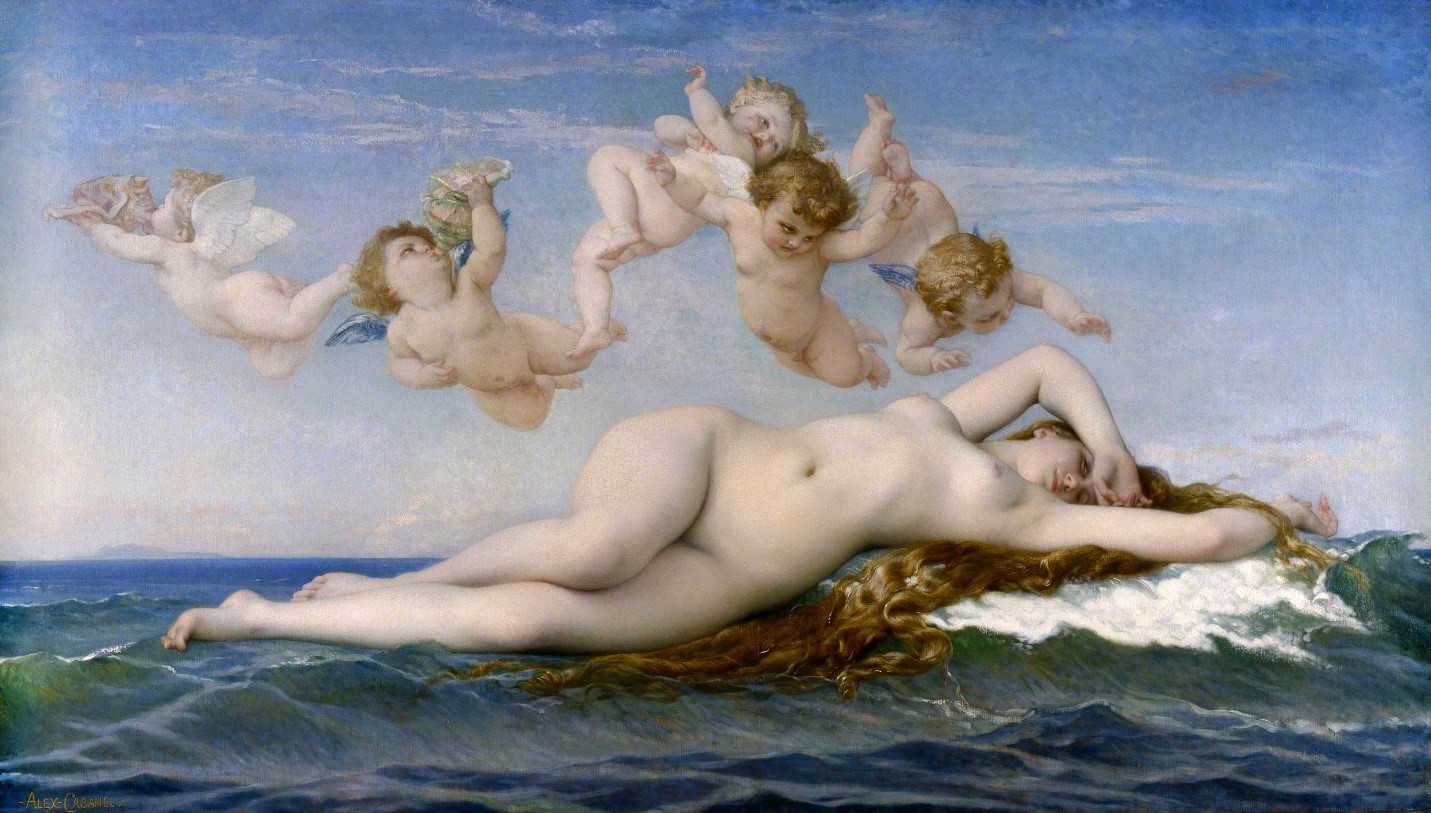 An artist’s rendition of Venus, a representation of sexuality from a less spiritually degraded era. Alexandre Caban, 1863.

Near the end of the film there is a hint that casual sex has something positive about it, as if to counteract the long line of ugly encounters throughout the film. Victor thinks back to his first casual sexual encounter in an airport bathroom. A middle-aged woman with a wide grin actually bothers to ask how he feels after they have intercourse, in an unusual hint of concern for one’s sex partner – but the scene is still awkward and unsettling.

The film ends with a hastily tacked-on set of declarations which would be more appropriate on motivational posters. No one is perfectly good or evil, the narrator tells us, and making your own decisions is more important than making good ones. This is in line with a major theme in Palahniuk’s work, namely the empowerment of the individual. But of course, as even Victor himself implies he knows, sleeping with strangers is far from empowering.

Finally, Victor has an encounter in an airport bathroom with Paige, a beautiful woman with actual feelings for him, although he has rejected her twice and since then made no attempt at contact. This unlikely stroke of luck seems to be another weak attempt on the filmmaker’s part to redeem the protagonist’s sexual habits as something other than completely isolating. 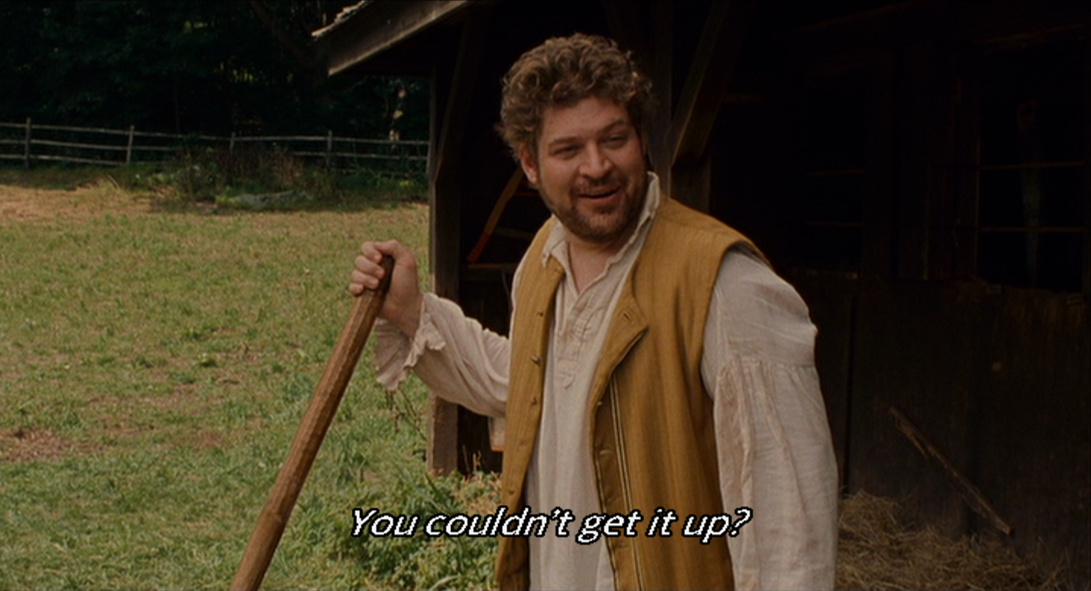 Denny taunts Victor about a common side effect of excessive sexual behavior.

Again in line with Palahniuk’s theme of individual empowerment, Denny continues his more fulfilling life by building an indeterminate structure with rocks he had collected to mark his progress in sexual abstinence. There is no apparent plan or purpose to this; he simply explains that he means to accomplish something good rather than merely try to avoid doing bad things, as he had in the sex addiction program. Further, he and Beth work together on the project, so it supports a positive new relationship. The perpetually negative Victor initially dismisses this, but ultimately joins in.

Much of modern entertainment that deals with harsh subjects comes across as the effort of negative people to drag others down to their own level of misery. But as with Palahniuk’s work overall, Choke escapes this trap by being hilarious and ultimately uplifting in pointing to a more meaningful life. It shares this with of much the Dissident Right, which satirically highlights dark trends in society while offering a more natural identity as an antidote. The author admits that many people lack purpose in life and are thus “just animals in the zoo” for the moment, but considers himself a romantic rather than a nihilist, and hopes that our degenerate era will lead to “the most romantic time we’ve ever witnessed.” As he puts it, “You have to unfold a world of unrest, disgust, un-wellness before you can have an epiphany of well-being.”

» The 2018 US Elections:
A Near-Death Experience