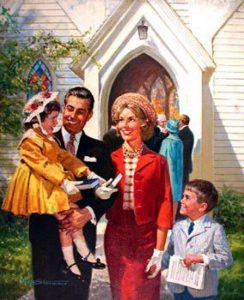 It is a commonplace among White Nationalists to disparage Christianity. This is understandable inasmuch as most of the Christian denominations today have abandoned almost all of the tenets of Christianity. The typical Christian minister or priest is no longer a saver of souls but is instead an anti-white social justice warrior (SJW). “Is the Pope Catholic?” is no longer a self-evident joke but is now a serious question that must be answered in the negative. Millions of Christians hold fast to a historical faith that is actively opposed by institutional Christianity. The mainline Protestant denominations have been in spiritual decline since the end of the Second World War, the Catholic Church has been lost since Vatican II, and even the low-church Protestant denominations such as the Southern Baptist and the various Evangelical and Pentecostal denominations have succumbed to the inanities of the SJWs and the nonsense of dispensationalism, the latter being the ludicrous idea that, somehow, the Jews are still the Chosen People and that a powerful state of Israel is a necessary condition for the Second Coming of Christ.

The response by many White Nationalists to the spiritual collapse of Christianity in the West has been to write off the religion as a useless relic of the past that has no place in the coming ethnostate. This approach, I believe, is very shortsighted for several reasons. First, White Nationalists are rightly concerned with the organic nature of the nation-state. An ethnostate is by definition organically organized. As such, it is important to remember that Christianity has been an organic component of Western civilization for the past two millennia. It is unreasonable to think that worship of Zeus, Odin, or any sort of artificially created New Age substitute for Christianity will be any more successful than Antoine-François Momoro and Joseph Fouché’s attempt during the French Revolution to replace Christianity with the Cult of Reason. It is also important to remember that those countries that have most resisted the tyranny of globalism (Hungary, Poland, etc.) have done so by consciously asserting Christianity as an essential and organic part of their national identity. And second, yes, institutional Christianity is corrupt, immoral, hostile to white interests, and intellectually and spiritually bankrupt. So are the universities, large corporations, the press, and almost all government entities. Yet there will be universities, corporations, a press, and a government in the coming ethnostate. Any institution that has been corrupted can be uncorrupted, Christianity included.

The Gramsciian long march through the institutions began with the Church. In fact, the long march through the Church actually predates Gramsci’s formulation of the concept. In 1907, Pope Pius X authored the encyclical Pascendi dominici gregis (Feeding the Lord’s Flock) that denounced in the strongest terms the attempts by modernists within the Church to substitute Leftist ideology for Christian theology.[1] [2] The Leftists eventually won in 1962, when Vatican II all but destroyed the historical faith. In Protestantism the rot set in much earlier, and one famous example can be seen in the work of the Transcendentalists, who, applying the tenets of literary criticism, replaced the theology of Calvin with the hippy-dippy feel-good theology of emotions that wrecked the Congregational Church and gave us the Unitarian-Universalists, a denomination that has no God and no theology, and exists mainly as a support group for overweight lesbians, transitioning beta males, and graybeard college humanities professors who think Woodstock Nation was akin to Periclean Athens.

With the corruption of the Church well underway, it was child’s play for the Left to attack the educational system. The GI Bill had horrible consequences for colleges and universities. After the conclusion of the Second World War, there were suddenly hundreds of thousands of unqualified veterans who were now able to afford college, thereby infusing billions of dollars into institutions that were in the process of being taken over by the Left. Academic standards began to fall in the late 1940s and have been in decline ever since. The Vietnam War also consolidated the Left’s grip on the universities because college students could claim exemption from the draft. And even when exemption policies changed, theology majors were always exempt from the draft. Thousands of radical Leftists with no religious vocation attended seminaries during the period of the Vietnam War to resist the draft, and ended up subverting the religious institutions in which they eventually became ordained.

Simply put, for the past fifty years, white persons of European descent have mostly been without religious and intellectual leadership — and yet man remains a religious creature. He yearns for intellectual and spiritual truth. An abiding idea that has permeated the Western conscience since the time of the ancient Greeks has been the search for the truth. Truth-seeking is one of the most distinguishing characteristics of the West. “And ye shall know the truth, and the truth shall make you free” is not just one of Jesus’ utterances in John 2; it is the underlying basis of our legal system, the scientific method, and even the concept of free speech. The Christian belief in the unwavering nature of God was an extremely important factor in the development of modern science that is rooted in discovering those laws of nature which are universally applicable.

Now we come to that White Nationalist bugaboo: the U-word, universal, defined as including or covering all or a whole collectively or distributively, without limit or exception, especially: (1) something available equitably to all members of a society, such as universal health coverage; (2a) present or occurring everywhere; (2b) existent or operative everywhere or under all conditions, as in universal cultural patterns; (3a) embracing a major part or the greatest portion (as of humankind), such as the idea of a universal state or universal practices; (3b) comprehensively broad and versatile, such as a universal genius; (4a) affirming or denying something in all members of a class, or of all values of a variable; (4b) denoting every member of a class using a universal term; and (5) something adaptable or adjustable to meet varied requirements (as of use, shape, or size), as in a universal gear cutter or a universal remote control.

Yes, Christianity is a religion that seeks to convert all humans. In this sense, it is universal. But there is absolutely nothing in Christian theology that commands, recommends, or even considers the notion of one-world government or open borders. In fact, Christianity is mostly unconcerned with temporal governments, since its emphasis is on the afterlife. “Render unto Caesar” — which can be understood simply as obey the law — is hardly the clarion call of an SJW calling on the Antifa to physically attack political opponents.

There is a great deal of confusion among non-Christians and Christians alike about the “universalism” of the Great Commission, that is, the commandment by Christ to spread Christianity throughout the world, to all nations. The word “nation” always appears in the plural. There is nothing in the Bible to support open borders, unlimited immigration, or to deny the right of a sovereign nation to control its borders. In fact, there is support for exactly the opposite. The Tower of Babel story, for example, strongly suggests that the division of humanity into distinct states based on linguistic, ethnic, and racial identities is divinely ordered.

It is also amusing that whenever Leftists try to use scriptural references to support their ideological positions, they use only half of the appropriate passage and/or quote things woefully out of context. Yes, it is true that the Holy Family fled Nazareth and hid out for a while in Egypt. The estimates of their stay in Egypt range on the low end from two weeks to the high end of several years. In a sense, they could be considered to be refugees. But the Holy Family went home. And while they were in Egypt, they behaved themselves. They did not insult or take advantage of the Egyptians, nor did they attempt to replace the indigenous population of Egypt with Nazarenes. Also, Leftists forget that during Christ’s lifetime, all of the Middle East was a part of the Roman Empire and was essentially one country, so the flight from Nazareth to Egypt was more akin to a hurricane victim from Florida staying in Virginia for a little while until the danger has subsided and he can go home. The Flight to Egypt, therefore, provides no support for open borders or unlimited acceptance of refugees.

Make no mistake about it: The restoration of sanity, and theological and intellectual rigor, to institutional Christianity will be a long and arduous task, not unlike those tasks we face with restoring every other Western institution that has been corrupted and weaponized against the white race. The benefits of a restored and white-friendly Christian Church will be enormous, however:

In the end, I think that it will be harder to create a white homeland without Christianity than it will be with a restored institutional Church. White people need every institution that can bind us together. We need the community that a strong Church can support, and we need a shared vision of the world that a restored Church can inspire. Above all, we need institutions that are committed to the truth — all truths, theological, philosophical, political, and biological. And ye shall know the truth, and the truth shall set you free. Now there’s a motto for White Nationalism.