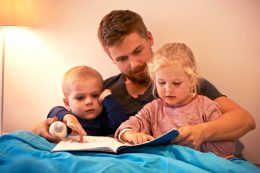 Habits of mind break hard. When these habits are formed in childhood, they have a way of sticking with a person throughout his life. They structure his thinking and his perspective, and often take effort and discipline to overcome. Of course, not all habits must be overcome. Chewing with our mouths closed, for example, is an appropriate habit of mind. Viewing racial diversity and race mixing as de facto positives in life, however, is not. This habit of mind has led to the dwindling white majorities in nearly all Western nations and will lead to the eradication of the white race if it is not broken soon.

How to fight this? Wouldn’t it be easier to raise the next generation of white nationalists if they never had this egalitarian and self-destructive garbage in their heads to begin with? Well, we can start with writing children’s literature of our own. Ash Donaldson recently did just that with his excellent Blut and Boden: A Fairy Tale for Children of European Descent [2] (reviewed at Counter-Currents here [3]). But this work is eighty-four pages long and meant for older children, perhaps of the pre-Young Adult demographic. What about rightist literature for little children? What about the kinds of stories and rhymes that parents can read to their diapered toddlers while gliding together on the glider? Really, is it ever too soon to introduce ideas of racial identity into the minds of white children?

On this front, we have either nothing or something close enough to nothing to be an embarrassment when compared to what our enemies bring to the table. The very idea of feeding racial, right-wing ideas into the minds of precious children is so far beyond pale these days that I’m sure many on the Right haven’t even considered probing this front in the culture wars. Perhaps it’s too absurd to think about, like a white nationalist muppet appearing on Sesame Street. But does it have to be? We could start by omitting all racial and ethnic diversity from our earliest children’s literature and keeping it entirely white. And as the children grow we could introduce more explicit ideas of race, race realism, and identity. Imagine: a picture book version of the original Birth of a Nation, a comic book adaptation of The Song of Roland, a board book commemorating the American Confederacy or Apartheid South Africa, an illustrated biography of Sam Francis or Jared Taylor, or a pop-up book explicitly instructing white children to be proud of their race. These are doable efforts that no one is even considering trying.

Next year Counter-Currents will publish my initial efforts in this regard, My Mirror Tells a Story, which is a sixteen page picture book written entirely in verse. The story targets elementary school kids who are old enough to read and young enough to appreciate a simple a-b-c-b rhyme scheme. It’s about a child who questions much of the anti-white cant being passed off as education these days and concludes after some soul searching that he must be proud of himself, his family, and his race. When he looks in the mirror, he sees not just himself but his ancestors—all the people who made him who he is.

Of course, such stories must be simple and optimistic yet never crass. We can laugh at the idea of a children’s book preaching hidebound messages like “whites good, blacks bad” or portraying Jews as scheming, money-grubbing villains. It’s funny because instructing children to become world-weary cynics—especially on the topic of race—is just not something parents would typically do. They’d just as soon encourage four-year-olds to smoke. Yet parents do have an obligation to tell it like it is. Any white parent who lets his kids grow up without even the slightest inkling of racial differences is doing them a great disservice. Given how the world is turning so rapidly against us, it grows closer to neglect every day. Children’s literature, if done correctly, can help in this regard. It can instill mental habits in children that can be called upon once they grow up and have to deal with the realities of race.

People who are interested in this should check out a story called Chicken Sunday by Jewish author and illustrator Patricia Polacco. It’s basically the eye of the hurricane that is multi-racialism and it depicts the mythological source of the black-Jewish cultural alliance in post-Civil Rights America. Although race isn’t mentioned, the story implies that a shared history of oppression and poverty among blacks and Jews make them natural allies. Uglier aspects of the relationship between these two races are entirely omitted, of course.

It’s the story of a little girl who spends Sundays with a neighboring black family. The Eastern Orthodox iconography in her home indicates that she’s white—likely Russian or Ukrainian—and not Jewish like the author. She’s friends with two boys from the household, Stewart and Winnie, whom she claims to be her “brothers.” Their “gramma,” the numinous, gray-haired matriarch of the family, is Miss Eula. Wide and matronly, Eula embodies the typical black mammy type who sings in church “like slow thunder and sweet rain” and loves the girl like one of her own. (The girl’s babushka died two summers ago, poor thing.) She feeds the girl fried chicken, collard greens with bacon, and “a big pot of hoppin’ john” for dinner. She airs herself constantly with a paper fan. And she looks plaintively to heaven whenever she grips the three blissful children in her big, flabby, gramma arms. Despite such spiritual contentment, Eula can’t pass Mr. Kodinski’s hat shop without sighing over a pretty hat she cannot afford.

The kids then get the idea of buying that hat for Eula’s Easter present. Of course, they don’t have enough money, so they decide to approach Mr. Kodinski to see if they can work for it. But just as they reach the man’s store, some unidentified older boys throw eggs at it. When Kodinski appears, he thinks Stewart, Winnie, and the girl are the culprits. Kodinski is so recognizable as a Jew that he might as well have stepped out of a time machine from late-nineteenth century Vilna. He’s got the long nose, the long white beard, the black hat, black trousers, black suspenders, filthy white shirt with the sleeves rolled up, and a striped prayer shawl hanging behind him like coattails. The children flee, and Eula doesn’t know what to believe.

The girl then gets the idea of painting eggs and offering them as a gift to Mr. Kodinski to prove that they were innocent. Her babushka did this very thing back in the old country. When they present their beautiful eggs to Mr. Kodinksi, he’s delighted and lets them sell them in his shop. Of course, the eggs were a big hit on Easter, and the children get to have tea and snacks with the old man with the funny number tattoo of on his forearm. Afterward, Kodinski gives the hat to an overjoyed Eula, and all’s well that ends well. The story concludes years later as the little girl, who’s now a woman, professes to still cherish her memories of chicken Sundays.

Yes, I am sure all the triumphant negrophilia and philo-Semitism in Chicken Sunday will rub most Counter-Currents readers the wrong way. I am also aware that the story steps on just about every stereotype rake on the lawn. (Fried chicken and collard greens? How did the censors let that one slide? The Left must have been less vigilant about racial thought crimes back in 1992 when the story was published.) Taking all of this out of the equation, however, Chicken Sunday is everything a children’s book needs to be. It may even be the best of them all—and I have read over a hundred of them with my children. The story is clever and creative, with the egg-painting conceit being entirely unpredictable unless you’re familiar with Polacco’s earlier story Ruchenka’s Eggs which deals with the topic. It has a clear beginning, middle, and end, a tight plot, and a sense of discovery on every page. It has fifteen pages of text, which is the right length for elementary-school-aged children. The artwork impeccably conveys all the emotion described in the text and captures detail beautifully—both human and non-human.

The story also promotes universal virtues such as friendship and love for family without ever preaching or talking down to its readers. The main characters show empathy for others and strive to do what’s right. They respect their elders. They hold tradition and religion in high regard as well. But it’s the egg-painting idea which reveals the true genius of the story. The little girl reaches back into her own ancestry and produces something that is part of her identity to solve an existing problem. Whether Polacco realized it or not, this is ethnocentrism at work. This is not bigotry or hate. This is simply pride and confidence in one’s own people.

This is what we, as racially conscious whites, need to instill into our children.

If My Mirror Tells a Story is successful and if the Counter-Currents editors like the idea, I will try to come up with other children’s stories. These stories will promote a positive racial consciousness among white children while entertaining them and educating them and instilling in them a sense of wonder about the world. These are lofty goals, it’s true. But, as much as it hurts to admit this, I know they can be met, having read Chicken Sunday.