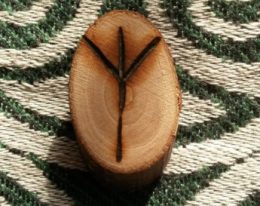 The eleventh hour of the eleventh day of the eleventh month had passed, and Elsa Bauer could not sleep while the wind howled about the hilltop farm, running cold, malevolent fingers down her big stone chimney, the old beech’s branches rustling against the slate and glass like a cacophony from a demonic symphony.

She had relit the fire and filled a pan of water to make some tea. Outside, the storm grew louder and fiercer with every passing hour, and she began to murmur the words to a song she had sung as a child:

Marching around the altar
Swinging our arms together
Sacrificing together
In the presence of a god
All of us are one
When the sacrifice rises in the pointed flames
Our blood flows in one stream
We dance joyfully, locking arms
All of us are one.

It was a Volkslieder, a Wandervogel tune, and she sat with her arms folded and her eyes half-closed in her woolen shawl, struggling to recall the second verse as the water bubbled to a boil. Elsa hummed the refrain very gently once again in an attempt to calm herself, and then repeated it again and again, as her mother had showed her all those years before, almost as if harmonizing with the hopes and dreams that seemed to sit there beside her in the flicker of the wax candle’s thin flame.

We reach to the heavens
Reach to the horizon
With our arms
We are a cup
From which the gods drink.

Then she paused as fork lightning rent the mountain’s side, and then jumped to her feet as tiles tumbled from the gables, slivers of grey splintering in the night. The sound of a knock on the wooden shutters brought Elsa to her senses. Reaching for the old rifle propped against the farm table, she opened the door slightly and was confronted by the outline of a man standing on the threshold. Before she could raise an objection, he pushed his way in, as if familiar with the space, and then closed the door, securing the clanking latch against the will of the wind and a flowing brown carpet of dead leaves.

“There,” he said, more to reassure himself than addressing Elsa, “that will keep the kobolds out!”

The woman of the house pointed the Mauser at him, and her strange guest raised both hands in supplication, moving as instructed over to where the fire blazed in the open hearth, filling the room with sparking woodchip that stood in sharp contrast to the dark and chill from whence he came.

“So cold,” he kept saying, “so very cold!” There, before the open mantle, the man – a tall, angular figure – sat down in the wooden rocking chair, those ever-so-recognizable glassy orbs fixed on the meandering light while his pianist’s fingers played through lank flaxen hair.

“You have come far?” his hostess asked from behind the safety of the raised weapon.

“Very far,” he replied almost mockingly, and just for an instant, those marble eyes reluctantly pulled themselves away from the mesmeric dance of the sulphurous tongues in the sooty grate and ran over Elsa’s blushing face with an intensity that reminded her of her wedding night, five years before.

She watched him lean back in the seat, reaching for a silver hip flask buried deep in his trenchcoat’s pocket, lighting the stub of a cigarette and puffing consumptively through thin white lips. Elsa wound the woollen shawl even more tightly around her bony shoulders and took a stool by the small lattice window from where she often watched the Sun come up over the valley’s eastern rim.

“I don’t know why you treat me as an outlaw?” he enquired, waving a finger toward the gun aiming directly at his heart. “Not when I have travelled all this way in answer to your invitation!”

“And I did wish. But I had not anticipated such a hostile reception!”

“What did you expect?”

Elsa smiled cynically, drawing the bolt and putting a round in the chamber.

“And a fond embrace, perhaps?”

“The notion had occurred to me, yes!”

Elsa shook her head. “These are treacherous times. Can’t you hear the wolves calling from the slopes of the Vosges?”

They sat in silence for a while, pale moonbeams washing over Elsa’s cotton nightdress, her bare toes splashing in a puddle of pallid light on the polished stone floor.

“And how is the trade in Colmar?” he asked, trying to break the deadlock.

“Bad. There is little coin. We are bartering eggs for hoes.”

“French Tirailleurs see who comes and goes. It is like a Casbah by the Lauch!”

“Seized as war reparations by Colonel Le Blanc.” She could see he was becoming agitated now, almost defensive.

“I don’t understand,” he said. “The generals must have known something. We were still singing ‘Watch on the Rhine,’ and the Steyr-Mannlichers the Quartermaster was handing out were even more reliable than before.” He looked up from his muddy boots. “Signing our surrender in the Compiegne was a mistake, I tell you.”

“Sometimes death and defeat are unavoidable.” Unlike him, she sounded almost resigned to it.

He shook his head. “But what of you?”

“With nothing to feed the animals?”

“The Vorderwald and the goat?”

“But how will you live, your mother’s old, and . . .” His voice faltered for a moment. Elsa heard it catch in his throat as he swelled with emotion.

“Nothing!” He looked away.

“No, this will be different. Armin told me there are riots in Kiel, Frankfurt, and Munich. The Spartakusbund have taken to the streets.”

“We are far from there. No one pays any attention to us. We are not lawbreakers.”

Outside, in the yard, the rain began to rattle on the flags like the Maxim guns against the walls of Dinant. There was another flash of lightning, and then a howitzer crack of thunder to herald another bleak campaign.

“Mother has heard tell of a preacher,” Elsa mused.

“Lutheran or Jesuit, they are all the damn same, I tell you. When the bullets let fly, it is every man for himself.”

“A soldier, you say. Interesting?”

“Speaks like you and I, just knows more words.”

“A convert, perhaps. I have seen such cases. Fear drives men back to the pulpit. You’ll readily believe in divine salvation if you have used a bayonet up close, or watched the top of a man’s head get shot clean off by a Tommy’s .303.”

“And you, do you believe in salvation?” Elsa asked.

“I believe in a full stomach and the recuperative powers of brandy,” he laughed, draining the last dregs from his hip flask. Elsa noticed a dent in the dull metal, and he caught the troubled thought as it passed like a ricochet across her visage.

“A French Lebel did that. Not a bad weapon.”

“Corporal Kastner got him in the throat.”

“Then you are a fortunate man.” A dark shadow ran across his face and he reached into a breast pocket, bringing out a handful of bloodstained papers.

“Lucky, you say. I wish!” His finger poked through a flange of ruddy flesh surrounding a large bullet hole in his chest.

They sat opposite each other across the bare table, staring over Elsa’s drained teacup.

“You know, don’t you?” he eventually asked. Tears flowed.

“Yes, I sensed it straight away.”

“But what else is there?” she cried. “The ritual, the song. I wanted to say goodbye.”

“Yes, a Rhine Maiden,” she laughed bitterly, “nothing more.”

“But you are gone. What else is there?”

“You feel nothing inside?”

“No, you are full. Your blood stopped flowing this last month.”

Elsa nodded. “How could you know?”

He raised a finger to her mouth. “You thought it was all the bitterness and worry caused by the letter from my commander?”

He shook his head. Then he reached his hand across the table and opened his palm to reveal a roughly-hewn life rune cut from fresh birch.

“For the child,” Elsa replied. They gently kissed.

“Until next time,” he smiled, turning up his collar and walking towards the door. Elsa watched breathless as her husband stepped out over the threshold into the darkness and melted away once again into the threshing storm.