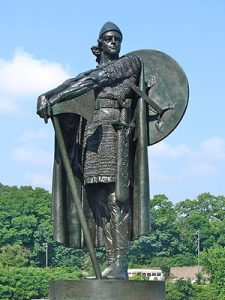 The statue of Thorfinn Karlsefni in Philadelphia.

Last week, morning joggers running  along Kelly Drive in Philadelphia came across the once-prominent statue of the Viking explorer, Thorfinn Karlsefni – torn down and lying upon the ground. The general consensus is that the statue’s toppling was conducted in the same spirit that led to a spate of vandalism against Confederate monuments earlier this year, given that it has also previously been defaced by anti-white graffiti. This statue is also where Keystone United (formerly the Keystone State Skinheads) meet as part of their annual Leif Erickson Day celebration.

Many Philadelphians, including self-proclaimed anti-racists, saw its destruction as misguided and unhelpful in the fight against racism. A number of Facebook posts and comments on articles declared that just because Keystone United gathered there did not mean that the statue was inextricably linked to white supremacists. The statue has been standing n a Fairmount Park walkway since 1920, where it was installed [2] as part of a series of statues “emblematic of American history.”

What the defenders of the statue fail to recognize is that anything that celebrates white history is now viewed as a fair target for the foot soldiers of the anti-white system in which we reside. While Keystone United’s celebration of the statue certainly increased the likelihood of something like this happening, there is a high probability that the statue would have eventually become a target anyway because of some other slight or microagression imagined by the SJW crowd. The end goal for our enemies is the erasure of white history.

One response to this incident came in an opinion piece [3] published on the Philadelphia Inquirer Website by the retired academic, George Lakey, entitled “What white nationalists get wrong about the Vikings.” Lakey has written numerous books on Leftist activism, including A Manual for Direct Action: Strategy and Tactics for Civil Rights and All Other Nonviolent Protest Movements, Strategy for a Living Revolution: a World Order Book, and No Turning Back: Lesbian and Gay Liberation in the ‘80s. His most recent book is Viking Economics: How the Scandinavians Got it Right and How We Can, Too, published in 2016, which has been advertised with the following amusing blurb:

Liberals worldwide invoke Scandinavia as a promised land of equality, while most conservatives fear it as a hotbed of liberty-threatening socialism. But the left and right can usually agree on one thing: that the Nordic system is impossible to replicate elsewhere. The US and UK are too big, or too individualistic, or too . . . something.

Hmmm. What could it possibly be that helped the once-largely racially homogeneous Nordic countries to attain such an idyllic system of government, while thoroughly multicultural countries like the US and UK have languished in increasingly inegalitarian systems? Now that the Nordic countries are facing their own multicultural test, we are seeing how their “unique” system is standing up to the infusion of a non-white parasitic class.

In any case, since Lakey has written a book with “Viking” in the title, he decided to expose the supposed stupidity of White Nationalists who revere the Vikings. He does so by arguing that blond-haired and blue-eyed Viking culture was in fact superior to other cultures that were contemporary to the Vikings. This does not sound like disagreement with the idea that culture created by whites is preferable for most people of all types, which is the argument advanced by White Nationalists. But Lakey’s goal is to straw-man all White Nationalists as claiming that they espouse a “Nazi ideology of violent, misogynistic white tyranny.” He contends that White Nationalists have forgotten a host of other Viking cultural characteristics that he presumes they despise:

. . . their remarkably egalitarian ethos, again relative to a time when slavery was commonplace. The equality, rough as it was, grew out of Viking circumstances. Viking husbands were often away on expeditions, leaving their wives in charge of farms and community life. Viking women learned leadership skills, made major decisions, gained the right to divorce their men, became to a remarkable degree partners instead of servants.

The expeditions themselves put a premium on teamwork – the good for one was dependent on the common good – and tyrannical leadership gave way to more or less cooperative leadership.  Immigration into Scandinavia was met with respect because the margin of life there was narrow and helpful skills were needed.

Various debates over the ideal political system arise constantly in White Nationalist circles. All of these debates will be meaningless if our people cease to exist. Thus, all white people are welcome to join the fight for their own survival and the survival of their descendants. To quote from the Manifesto:

A racially conscious Left is not impossible. We know this because it has actually existed. For instance, in the United States, Canada, Australia, and New Zealand, Asian immigration was promoted by capitalists whereas Asian exclusion legislation was promoted by the labor movement. The key to winning over white conservatives—and eventually white liberals as well—is convincing them that the things they value are not universal but particular to white people. We will never have either American capitalism or a Scandinavian welfare state if the people who created these systems are replaced with non-white invaders. All white politics—Right or Left—is white identity politics in the end.

The notion that the Vikings would not have fought to prevent their own genocide due to some adherence to an egalitarian code is absurd, and Lakey must surely know this. Thus, he can only construct his argument by distorting the purpose and ultimate goal of White Nationalism, which is quite simply the survival of white people as a distinct race.

It should be pointed out that some of the forerunners of White Nationalist thought were early American Progressives such as Lothrop Stoddard, Madison Grant, Theodore Roosevelt, and even Woodrow Wilson to some extent, whose monuments have also been attacked [4]. These men recognized that the world was changing in ways that required a new emphasis on conservation if humanity was going to survive and flourish, including the conservation of unique racial characteristics, which, if lost, can never be recovered. This is no longer the world of the Vikings. A “rising tide of color” poses a greater threat to white peoples’ existence than ever before, and we must question our natural altruism in light of this threat.

There is probably much to quibble with over George Lakey’s characterization of Viking culture. A great deal could also be said about his simplistic assumptions regarding Nazi ideology, which rely upon an uninformed readership which believes that Hollywood’s depiction of Nazism is accurate. Lakey is apparently unfamiliar with the economic miracle that raised millions out of poverty in National Socialist Germany. More could also be said about the terrorism and censorship utilized by anti-white institutions to suppress dissenting opinion. But the most fundamental problem with Lakey’s argument is that, whether through ignorance or deliberate deception, he is wrong about White Nationalists. Anyone who earnestly seeks to know the truth about White Nationalism will immediately see his errors. (The White Nationalist Manifesto is a good place to start.)