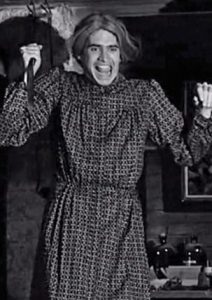 Norman Bates has been created, a mentally deranged man dressing up as mother. There are many like Robert Bloch’s character; some like Liam Suleman/Lucy Edwards, William/Gillian Jaggs, and Kayleigh-Louise Woods/Kyle Lockwood have all murdered women exactly like the character; others behave in other violent and depraved ways, like Miguel/Michelle Martinez, Kim Leverton, and Gary/Carys Cooper, who have all sexually assaulted children; still others are non-violent, but equally psychologically damaged. Let us be honest, all who identify themselves as “trans,” “genderqueer,” “LGBT,” “gender fluid,” “gender non-binary,” and all the rest of the newspeak terms that have emerged over the past fifty years, have serious psychological problems. A database has been compiled of crimes by “trans” persons, which can be accessed by clicking this link [2]. One notes that they are overwhelmingly born white and male. But how did all this come about, and how can we fix an ever-growing problem?

The problem is, after all, growing. One only has to look at the state of many males in any pub or high street and compare them to the stock from a mere twenty years ago to realize that something has radically altered. What has altered is, of course, women and, in turn, men’s relationship to them. While it is true that middle-class women had been robbed of their natural role in society, which I have talked about before in my Nature video series [3], which led to female-empowerment movements in the nineteenth century, the 1960s reaction was extreme and carried out against a society that needed tweaking rather than hitting with a hammer. Yet just as women lost their social status and aspect of the divine under Judeo-Christianity, it was Jewish women like Betty Friedan and Susan Sontag who pushed an agenda that has again had an adverse effect on white European societies, aided and abetted by powerful Jewish male-dominated money power and half-insane white Gentile women brainwashed in the seats of “higher learning” to hate their own men.

In Britain, feminism can be pretty-much summed up in one woman: Australian harpy Germaine Greer, whose book The Female Eunuch was a bestseller and attacked both men and the family. Greer has no children, is often wheeled out as a panelist on various BBC talk shows, and expressed her daddy issues in her autobiographical work, Daddy, We Hardly Knew You. She has also done the fashionable thing among feminists of claiming to have been raped in early adulthood in retrospect many years after the event, while simultaneously pushing the paedophilic abuse of adolescent boys by women in The Boy/The Beautiful Boy. She has claimed repeatedly that all problems come from “empowering the penis,” “testosterone,” and “male insecurity.” Her solution, then, has been to make them more insecure to the point where they loathe themselves, their testosterone, and their penises right from infancy via the school indoctrination system, where the two post-Christian generations of schoolchildren have learnt that the source of original sin is no longer Eve, but Adam.

What goes around comes around. After fifty years of the nastiest unstable bitches imaginable persecuting men for being men, resulting in psychologically damaging young boys into trying to become girls, feminists are now getting a taste of their own medicine from the monsters they created. Feminism has helped change the law into a hierarchy of protected groups, and trannies are now on top of the pile, and any logical criticism of them is a hatecrime. Well done. Germaine Greer tried to close the lid of Pandora’s box, but was undone by her own malice. She argued that men could never become women, but that meant they could never be free of original sin. Even the Roman Catholic Church had its penances to absolve one of sin. Yet men who rid themselves of the “evils” of testosterone and the penis were not to be absolved. It exposed her as the malicious witch she has always been. There was a reason such women were once put in attics or asylums.

On the British TV program This Morning (below), militant feminist Kellie-Jay Keen-Minshull (that’s a lot of hyphens) gets browbeaten into accepting the pseudo-science that men who have been through a process of cosmetic surgery are real women. “Feminism is under threat!” she declares. Yes, it is, because feminism relies on there being men for its existence. Its whole religious doctrine is based on the male as Satan. If Satan does not exist, then the wellspring of evil does not exist and so neither can good, for as St. Augustine said, how can one know what is good without comparison to evil? Equally, how can the good woman exist without the evil man? And therefore, how can feminism exist without the fight against the evil enemy? This is the real reason for the feminists’ hatred of transsexuals – and one notices that they never so much as mention the reverse, of female-to-male “transition.” Where is the outcry that this devalues manhood? No, this has nothing to do with a fight against pseudo-science, because feminism has lived off the pseudo-sciences of psychology and sociology for a long time now.

One notes how much more prevalent male-to-female “transition” is compared to the reverse. It shows on whom societal pressure and discrimination is placed. And the great irony in the video above is that the feminist is more masculine in both looks and attitude than the tranny. “India” Willoughby is placid, passive, and manipulates emotions of empathy, whereas Kellie Hyphen-Hyphen is blunt, assertive, and aggressive. Kellie has become the artificial man almost as much as India has become the artificial woman. Adam and Eve trade places in the new form of Judeo-Christianity, but the new Eve wins out because morality is still predicated on the Christ figure, where the greatest perceived sufferer is the most venerated. Just as Christ was conceived as a second Adam to redeem the first, so the tranny is to redeem the male. This is ultimately how Kellie Hyphen-Hyphen became a secular demon in the debate, because she used scientific facts against the tranny-Christ in a society where belief and “the feels” trump science and reason.

The whole cult of transsexuality really took off with the pseudo-science of sexology, “pioneered” by Jews like Magnus Hirschfeld and Harry Benjamin, and “academics” suffering from sexual perversions like Havelock Ellis, who could only get aroused by watching women urinating. Sexology, like sociology and psychoanalysis, was a way of seeing what made people and social interactions tick in order to break them down. One can see how feminism would interlock into these disciplines and become a perfect vehicle for social destruction. Hirschfeld ticked every SJW box imaginable with being a Jewish homosexual Trotskyite, and coined the words “racism” and “transvestite,” while Benjamin coined the word “transsexualism,” from which all derivatives hail. There have been many efforts to “prove” as scientific fact the fervent belief of being “trapped in the wrong body,” and often by dishonest means. At the same time, Leftist doublethink means this ignores the other pseudo-scientific premise that we are all the products of socialization.

To prove the point of pseudo-science presented as science, news broke yesterday of an academic hoax that played on the cult of SJW victimology. The “Sokal Squared” hoax was carried out by James A. Lyndsay, Helen Pluckrose, and Peter Boghossian, three genuine academics who were tired of what they call “grievance studies.” They wrote twenty parodies of postmodern academic papers, seven of which were accepted and four already published online before they admitted the hoax. The articles included “Going In Through the Back Door: Challenging Straight Male Homohysteria, Transhysteria, and Transphobia Through Receptive Penetrative Sex Toy Use,” which was published in Sexuality and Culture; “Human reactions to rape culture and queer performativity at urban dog parks in Portland, Oregon,” which appeared in Gender, Place & Culture; and “Our Struggle Is My Struggle: Solidarity Feminism as an Intersectional Reply to Neoliberal and Choice Feminism” (a feminist parody of a chapter of Mein Kampf), which was accepted by Affilia. 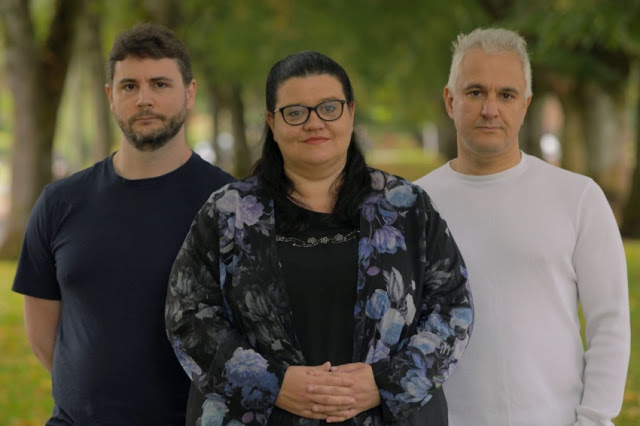 Yet the feminist-transsexual antagonism has implications for us on the Radical Right. Too often do those of the Alt Right feel obliged to pick a side. So hated are feminists (and understandably so) that any perceived enemy of feminism is invited into the Alt Light and even the Alt Right itself. This has facilitated the inclusion of MGTOW – a mirror image of feminism for men, White Shariah, Jewish homosexuals with black boyfriends, and trannies. Trannies Blaire White and Zuzanna Mroz have been brought into the Alt Light by (((Ben Shapiro))) and (((Rebel Media))), respectively; but worse is Claire Rae Randall, whom many of my Facebook friends seem to think is perfectly sane and who happily spouts the National Socialist view of history to them, but who was interviewed on Red Ice and who just wants the Alt Right to accept transgender theory as real science [5].

I do not wish to be misunderstood here; there are indeed unfortunate individuals who are born intersex, where anomalies from birth occur through genetic defects or problems during pregnancy and are born with both sexual characteristics to a greater or smaller degree. We are not dealing with those people here. The people we are dealing with are those who believe they have been born into the wrong body, which they call “gender dysphoria” because it sounds nice and sciency. Yet one notices they always want to mutilate the body rather than treat the brain, which is characteristic of mental illness. Part of their mental disorder involves attempting to normalize it to others, for like all diseases, its aim is to spread. This is why such people cannot be integrated into the movement. A movement is founded on principles, and the Radical Right’s principles are founded on Natural Law. What so-called transsexuals do is to play with language to demand their inclusion. They wish to change the parameters of what it means to be a traditionalist.

They might as well use the Leftist cry of, “Hey, it’s 2018!” And as I have mentioned before, their perversion becomes their hobby [6]; everything in life revolves around transsexuality. Take a look at the titles of Blaire White’s videos and you will see what I mean, titles like “Asking Strangers Which Of Us Is Trans,” “Psychic Tells Me I’m Pregnant (But I’m Trans . . .),” “Is My Boyfriend Gay?”, and “I Try to Live as a Man for the Day,” the last one with no sense of irony. If one accepts trannies or MGTOW or feminists and so on, it will spell the end of the movement, because it will just become a mirror image of the Left and become as big a basket case under its own contradictions. One cannot solve the problem by bringing it under one’s roof; like all diseases, it has to be isolated until it dies off. As little as twenty years ago, the problem in society as a whole was marginal. Through inclusion and tolerance, it has become an epidemic. Let us learn from this.

This article originally appeared at the Mjolnir Magazine [8] Website. Be sure to check out Mjolnir‘s YouTube channel, Mjolnir at the Movies [9], which features film commentary from a Right-wing pagan perspective.