The Open Secrets of Sheldon Whitehouse 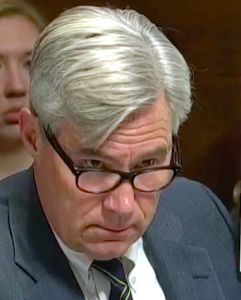 Politics is all about open secrets. This is especially true in societies as racially integrated and tribal as ours has become. These open secrets went on glittering display last Friday during the Senate Judiciary Committee hearing on Judge Brett Kavanaugh’s confirmation to the Supreme Court.

Both the Republicans – who at least nominally support his nomination – and the Democrats, who vehemently oppose it, spoke piously to moral platitudes. After trotting out their star witness, one Christine Blasey Ford, who accused Kavanaugh of sexually assaulting her thirty-six years ago, the Democrats warned the nation that we cannot trust someone who commits sexual assault to sit on the highest court of the land. And this is true. On the other hand, the Republicans pointed to Kavanaugh’s exemplary record and reputation, and the reasonable doubt that he is guilty given that none of Ford’s witnesses can corroborate her story. This is also true.

The open secrets here, however, make this ongoing event interesting. From the Democrat side, the secret is that they wish to stall the confirmation until the November midterm elections, after which – they hope – they will have the votes to keep a judge like Kavanaugh off the Supreme Court. As a staunch conservative, Kavanaugh would tip the Supremes five-to-four to the Right in a way that his centrist processor, Anthony Kennedy, never could. And in the middle years of a Trump presidency, this could seriously threaten Democratic dreams of continued non-white immigration into America.

Despite what they say, for the Democrats, it never was about sexual assault; otherwise, they would have resisted Kavanaugh’s appointment to the US Court of Appeals – the nation’s second-highest court of the land – for the same reasons. In fact, if it were all about keeping alleged sexual predators out of the body politic, the Dems would have just as strenuously opposed many in their own party, including but not limited to former President Bill Clinton, former Senator Al Franken, current Senator Bob Menendez, former Representatives Anthony Weiner and John Conyers, and current Democratic National Committee chair Keith Ellison, all of whom have been tainted by their own sexual scandals (and are non-white, except for Clinton).

This is what’s really going down, and both the Dems and their constituents are in on this open secret.

The Republicans on the committee, however, do not have this same connection with their voters. Their voters in general want to keep the normatively white America they have always known, as well as the white demographic majority. This is something that Donald Trump’s election in 2016 proved. Republican voters may be sheepish about expressing this explicitly. But closed borders, free markets, limited government, constitutional rights, and Christian traditionalism benefit white people and, if history is any indication, tend to lead to nice, white nations doing great, white things. The Republicans in the Senate Committee, however, seem to think that these things are good in and of themselves, and therefore don’t ever bring race into account.

Okay, we all know this. What makes the Kavanaugh hearing so interesting is not only that the Republicans – especially Senator Lindsay Graham – are finally wising up to the Democrats’ open secrets (Jef Costello gives a great rundown of this), but also that the Democrats actually slipped up and can be very easily challenged to reveal their open secret. No one at the hearing last Friday seemed to have noticed.

When Democratic Senator Sheldon Whitehouse was interrogating Kavanaugh, he challenged him to clear his own name by demanding an FBI investigation into his conduct with Ford years ago. Of course, an FBI investigation in this case would be ridiculous given that Senator Diane Feinstein knew about Ford’s accusation months ago and did nothing about it (and may even have leaked it to the press). Furthermore, when the Senate committee was doing its own investigation into this matter, the Democrats for the most part chose not to be involved. Only in the eleventh hour did they finally demand an investigation. And, of course, there is the simple fact that Ford’s accusation is entirely unsubstantiated. So instructing the FBI to perform an investigation at this point is pure political theater and a cynical stalling tactic, nothing more.

Yet this is exactly what Senator Whitehouse and the Democrats are getting. Thanks to Republican Senator Jeff Flake’s sudden change of heart, the FBI investigation is happening after all. Flake at first claimed he was going to vote in favor of Kavanaugh in the committee (and presumably on the floor of the Senate). But later, after being accosted by a pair of women in an elevator, he changed his mind, saying he would vote “yes” in the committee and “no” on the Senate floor unless an FBI investigation took place.

So the Dems got the investigation they wanted all along. Yet in committee, they still voted against Kavanaugh. Logically, how could this follow? They demand their investigation, presumably, because it could exonerate either Ford or Kavanaugh. In fact, Whitehouse explicitly stated that it could potentially exonerate Kavanaugh. Once they got their investigation, however, what on Earth could prevent them then from voting yes in committee? They could still flip-flop on the floor of the Senate if they are not satisfied with the investigation. Senator Flake has threatened to do so, so why couldn’t they?

By voting “no” in committee, the Democrats unwittingly showed that the FBI investigation means nothing to them. They basically showed their hand. They will vote “no” regardless, and it is a bawling shame that nobody in the committee room last Friday was quick-witted enough to call the Democrats out on this. According to Infogalactic, the Senate Judiciary Committee:

conducts hearings, questioning nominees to determine their suitability. At the close of confirmation hearings, the Committee votes on whether the nomination should go to the full Senate with a positive, negative or neutral report.

And so, with the promise of an FBI investigation that they themselves called for, why couldn’t Whitehouse and the Democrats produce at least a neutral report on Kavanaugh and send the nomination to the full Senate? After all, as Whitehouse himself stated, the investigation could go Kavanaugh’s way.

It’s a simple fallacy, really. The Democrats, in effect, are saying, “If A then B, and if not A then B.” Okay, if B is coming regardless, what do they need A for?

It should be clear to everyone why the Democrats need A. Admitting that they will vote “no” regardless of the outcome of the FBI investigation would be tantamount to revealing the truth about their open secret: that they’re only in it for power and the destruction of the white majority, and all the cultural and legal norms it brings with it. And such a blatant admission would only weaken their position regarding Kavanaugh.

Somebody with real influence should ask Judiciary Committee Democrats – especially Sheldon Whitehouse – about this logical inconsistency, preferably when the cameras are on. I’m sure the answer will reveal more than a few open secrets.