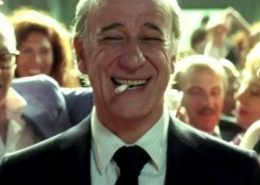 I am always astounded by how bad the films playing in mainstream cinemas look and, when I occasionally go to see them, I often find that my initial impressions based on the ads or a synopsis were fully justified. So when I enjoy a fairly recent film, it is noteworthy.

I recently watched La Grande Bellezza (The Great Beauty), a 2013 film by the Italian director Paolo Sorrentino which won the Academy Award for Best Foreign Language Film. And, to my surprise, I can say this is a good film.

Bellezza stars Toni Servillo as 65-year-old “journalist” Jep Gambardella. I put “journalist” in scare quotes because he never seems to do any work and spends most of his time partying and being unspeakably suave. We are introduced to Jep in the first scene – a ten-minute rooftop party sequence in Rome – and, with his shit-eating grin and joie de vivre, he struck me as inspired by the jovially corrupt Silvio Berlusconi (who began his career as a singer on cruise ships; he knows how to make everyone have a dangerously fun time).

Sorrentino’s strength is in lively scenes, striking images (the Roman cityscape is gorgeous), and his characters . . . all of them hilariously grotesque in their lust, patheticness, and pettiness, and yet disconcertingly plausible. You’re also having fun on that rooftop and enjoying the company.

The film is a glorious ramble. Jep is quite aware of the futility of his existence, and of the entire Italian media and cultural “elite’s” existence. He knew love once, about which he wrote a single novel, but nothing since. The decadent partying, which is fun, is juxtaposed with the heart-wrenching beauty of Rome, the layers of architecture reflecting the will and purpose of better men in past times: ancient Roman Imperial power, Christian piety, and even the ambitions and energies of the Italian national state (in both its liberal and Fascist forms).

Every man of the West must visit Rome at least once if he can. One must walk the ruins of the Fori Imperiali – the overdeveloped Manhattan of ancient Rome, a giant stack of religious and administrative temples – and consider what kind of great empire could build this, the center of the universe, and just how little remains. One must wander Saint Peter’s Square and feel that triumphant and conquering Christendom for oneself. The city is further indelibly marked with the Fascist architectural heritage, with many buildings and avenues (including the Fori) having been built or developed during Benito Mussolini’s twenty years in power.

The film closes with an encounter with la Santa, a kind of Mother Theresa figure, a 104-year-old Christian nun who has spent her life sacrificing herself by tending to the poor in Africa. Sorrentino cannot take this too seriously, either: la Santa barely moves or speaks, looking like a half-dead mummy. And yet, la Santa’s pietà can only make for a very strong contrast with the feckless lives of the leaders of today’s Europe. Who can remember when it was commonplace to have a life entirely dedicated to a set a values, to an all-encompassing mission, to a fanatical sense of purpose?

Sorrentino’s film makes a few overt references to the Right. The film opens with a quote from Céline and contains one of the most brutal smackdowns against a Communist career feminist that has ever been put on film (expressed, tellingly, by Jep). La Santa concludes – to the extent the film has any conclusion – by saying: “Le radici sono importanti.” (Roots are important.) The film is an ode to love and authenticity. There is a lot of Dionysian energy. I strongly suspect the artist known as “Bronze Age [2]Pervert [2]” was a co-author, or at least was involved as some kind of editorial consultant. When we men of the West rediscover this vital spirit, combined again with a sense of honor, then our entire people will be free and healthy again.

In passing, I also recently saw Youth, a 2015 English-language film by Sorrentino starring Michael Caine and Harvey Keitel. Sorrentino gives us more striking cinematography and outrageous dialogue in Youth (although, at least for me, this worked a little less well in English). The acting is good. But, the film is rather more depressing and hopeless. There’s also another aged mummy-like woman; even creepier, in fact.

I look forward to seeing Sorrentino’s upcoming work. He is only 48. His latest is Loro, a film about the politicians and businessmen around Prime Minister Silvio Berlusconi. This is a topic which, in the right hands, could be exploited to raise some important points about mass-media democracy, masculinity, and capitalism in our nihilistic age. I hope not to be disappointed.