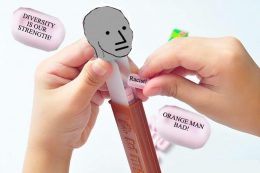 FEEL!!
I’ve got no inner monologue
I bow before the Synagogue
Maybe I’m an NPC, baby

This is how the ego dies
I’m taking my SSRIs
Maybe I’m an NPC baby.

This past weekend brought much weeping, wailing, and gnashing of teeth from the Leftist Hive Mind as what Chateau Heartiste dubs the “memetic killshot” that is the NPC meme hit pay dirt. According to Kotaku, “The NPC meme . . . paints people as agency-free and incapable of critical thought,” satirizing the Left’s uncritical adoption of “social justice” talking points wholesale from the media-entertainment complex (reified by academia and mass-marketed by corporations), akin to the CPU-programmed “non-player characters” (NPCs) in video games that are designed to progress the story line and are only able to repeat the same lines each time they are encountered. They are completely restricted to this one role within the game’s universe. As Robert Kraychik explains:

The popular NPC meme trend frames its targets as non-player characters (NPCs) who reflexively spout neo-Marxist axioms in response to real-world events. Actual NPCs are computer-controlled characters in video games with limited scripted responses given the parameters of the games in which they appear . . . Built on the long-running Wojak meme, the NPC meme mocks leftists as expressionless in appearance and bot-like in behavior. The universal standard appearance illustrates the left’s political homogeneity.[1] 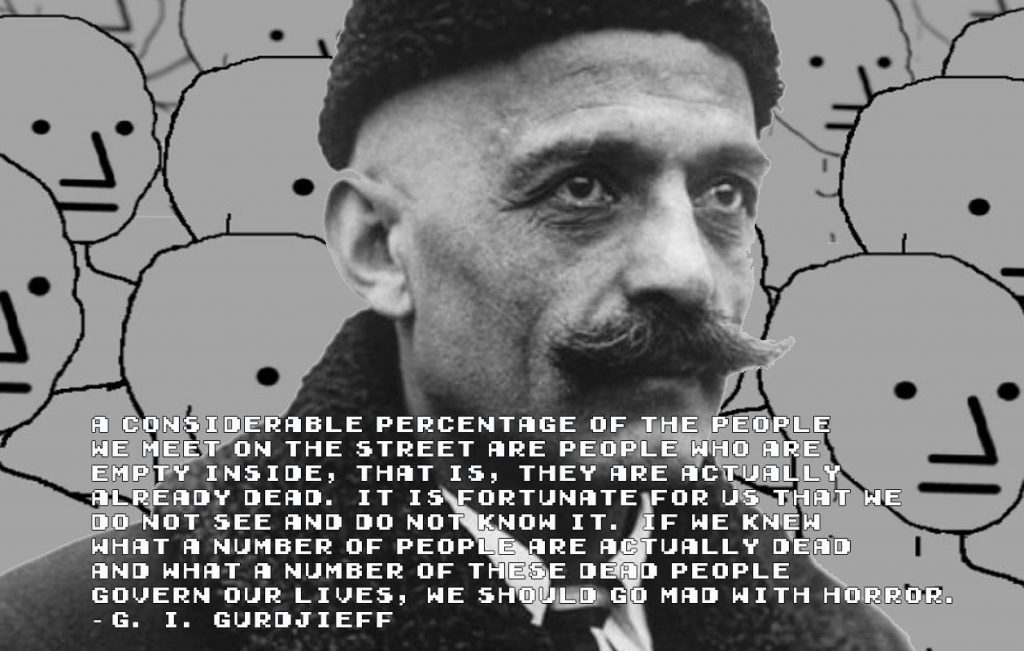 For people who fashion themselves rebels and trend-setters, the implication that they might be nothing more than pre-programmed objects coordinated by GloboHomo / Woke Capital triggers severe—and irreconcilable—cognitive dissonance, such that some 1,500 accounts on Twitter using the gray-faced NPC avatar were banned over the weekend alone. These “fellow humans” didn’t touch a collective nerve, they nuked it. As Andrew Anglin observed:

[The NPC meme] speaks to the core nature of this unhinged leftist mob: that they are not real, that their entire lives are faked, that their emotional state is the result of a marketing campaign. It trivializes all of them in the most brutal conceivable way. It explains, to any individual capable of understanding it, what we are dealing with in a way that everyone is able to understand. And no one can deny it after they’ve seen it.[2]

As is inevitable for a group that prides itself on its moral and intellectual superiority (regarding the latter specifically, see the Dunning-Kruger Effect), any challenge to this image—ostensibly self-fashioned but clearly received through a mass media filter—results in the existential imperiling of said image, which is synonymous with their actual “self.” Thus self and image are one and the same.

For a group that places preeminence on espousing the correct platitudes about diversity and cosmopolitanism—that has taken the rainbow as its symbol of “inclusivity”—the notion that their entire existence can be distilled into a line of code, a gray, featureless “life” as a mere appendage of globalism, is quite simply too much to bear, an existential assault so fundamental that to acknowledge it would mean oblivion. That does not, however, make the meme any less true. Very clearly it is just the opposite. As Revilo P. Oliver wrote:

The socialist dream, after all, can be realized only by the abolition of tradition and submergence of the individual in a uniformly ignorant and brutalized rabble that will be perfectly plastic material for “social planners.” . . . They yearn for change, however irrational, since change in itself fascinates them, much as children are fascinated by the violent movement of a roller coaster. They feel an adolescent’s romantic longing for a primitive paradise somewhere east of Suez where nobly ignorant savages, free from the trammels of tradition, wander happily under breadfruit trees and copulate whenever the spirit moves them. And they shrink instinctively from the heavy burden of high civilization. 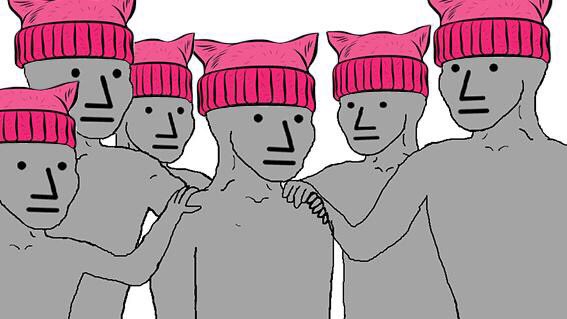 Instead, they protest and agitate for . . . what, exactly? To have rights taken away? Their pre-packaged rebellion supports all of the worst excesses of global capitalism. Their vision for a progressive utopia is some kind of horrific amalgam of Weimar Germany, Ukraine 1932, Ethiopia 1984, and China 2018. They are a mess of contradictions: debauched yet repressed, obsessed with “diversity” but totally uniform, communistic hyper-consumers. The hideous “anti-progressive” (as Cecilia D’Anastasio of Kotaku calls them) originators of the meme on 4chan devised it in response to the stolid multitudes, or “‘normalfags’ . . . who autonomously follow group think and social trends in order to appear convincingly human.” Despite the meme’s “offensiveness,” it would not have posed such a serious threat to the collective psyche of the Left if it weren’t for the fact that many of them fashion themselves both the #Resistance and harbingers of Progressivism. That their ideology is equal parts hysterical nonsense, genocidal fantasy, communist super-state, and utterly stale, soulless marketing construct is all of a piece of the catechism of academia and the corporate-fashioned identities of these “rebels.” Quoting Heartiste:

SJWs and generic unaffiliated shitlibs have two thermal exhaust ports: they are most vulnerable to mockery which targets their fears of being conformist suckups and of being unoriginal, predictable bores. The NPC meme — a humanoid graphic which substitutes a blank ASCII face for expressiveness, to which is attached standard neolib boilerplate — is the sort of soulkilling reminder that the SJW hordes don’t think for themselves and lean on digestible anti-White pabulum to help them feel unique. It’s a clever repurposing of the autism slur to apply to social media consumed leftoids who mouth late night talk show shibboleths thinking it makes them renegades.[3] 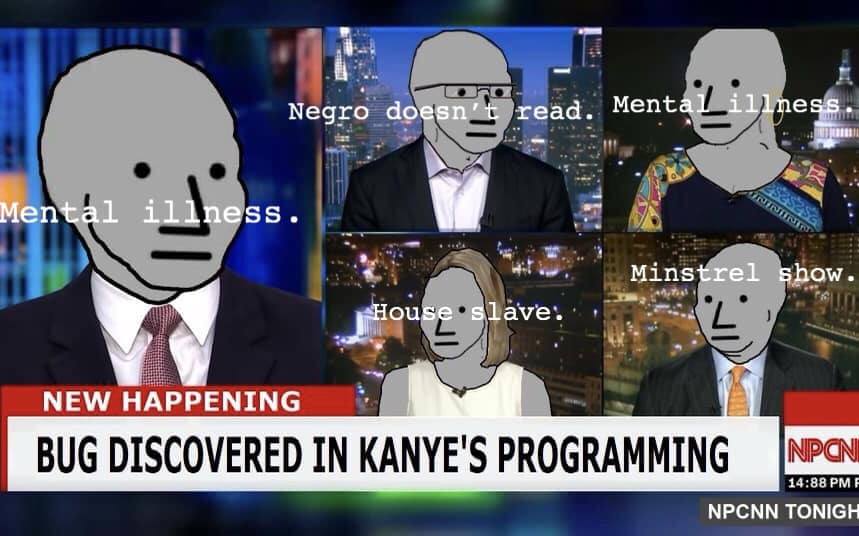 D’Anastasio says that portraying Leftists as automatons “betrays a lack of empathy for people whose experiences differ from yours.” Another divine irony from someone whose political avatar demonized Americans (real Americans) with the label “irredeemable”; this symbolizes not only the rejection of at least one half of the country’s genuine experiences, but a metaphorical casting to hell, a total damnation of the core of this country and placing it beyond salvation. Yet, in unison, the Left cried out in pain as they struck us that the NPC meme was “dehumanizing,” incapable as they are of self-reflection, unable to dispel any suspicions that they have no interiority. Returning to Anglin:

Is this outraged reaction to the meme not proof of the meme? What is the counter-argument to that claim? If they were not mindless programmed robots, they would be able to explain logically how they came to these positions. 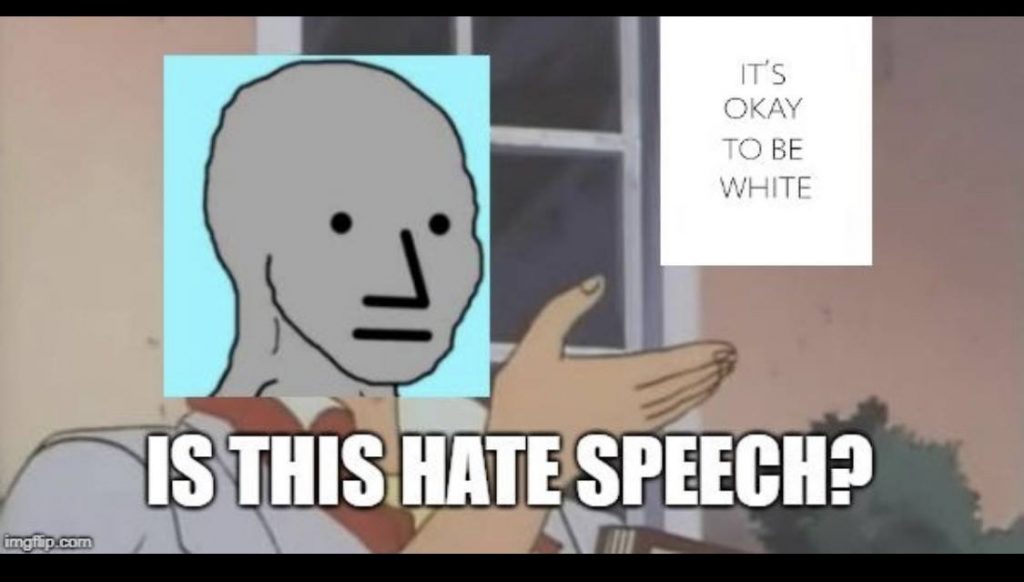 It is unnecessary to dilate on the superstitions of “Liberalism.” They are obvious in the cult’s holy words. “Liberals” are forever chattering about “all mankind,” a term which does have a specific meaning, as do parallel terms in biology, such as “all marsupials” or “all species of the genus Canis,” but the fanatics give to the term a mystic and special meaning, derived from the Zoroastrian myth of “all mankind” and its counterpart in Stoic speculation, but absurd when used by persons who deny the existence of Ahura Mazda or a comparable deity who could be supposed to have imposed a transcendental unity on the manifest diversity of the various human species. “Liberals” rant about “human rights” with the fervor of an evangelist who appeals to what Moses purportedly said, but a moment’s thought suffices to show that, in the absence of a god who might be presumed to have decreed such rights, the only rights are those which citizens of a stable society, by agreement or by a long usage that has acquired the force of law, bestow on themselves; and while the citizens may show kindness to aliens, slaves, and horses, these beings can have no rights. Furthermore, in societies that have been so subjugated by conquest or the artful manipulation of masses that individuals no longer have constitutional rights that are not subject to revocation by violence or in the name of “social welfare,” there are no rights, strictly speaking, and therefore no citizens—only masses existing in the state of indiscriminate equality of which “Liberals” dream and, of course, a state of de facto slavery, which their masters may deem it expedient, as in the United States at present, to make relatively light until the animals are broken to the yoke. 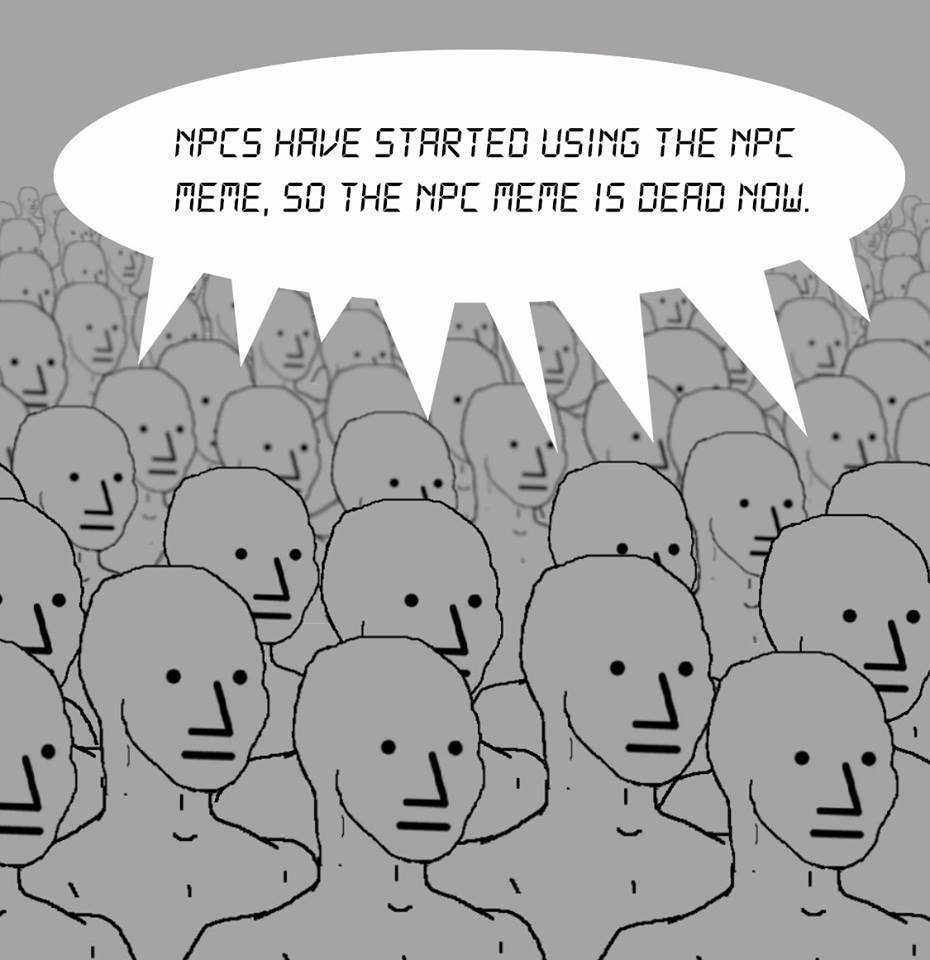 Indeed, the post-liberalist rebellion manual stipulates that serving as the shock troops for totalitarianism, genocidal “immigration,” forced miscegenation, and, above all else, someone else’s profits and your convenience is the highest calling a bipedal humanoid may undertake. This is the world the “Resistance” is fashioning: Progressivism, Incorporated with a side of the Soviet Union. Keep in mind these corporate shills whining about the “dehumanization” of the NPC meme are not only the same group of people that have been uniform in their condemnation of Rightists on social media as “Russian bots,”[4] but, quoting Tucker Carlson, “To modern Democrats, America is an economy with land attached; it’s a massive private equity scheme from which they are benefiting, its people are interchangeable humans widgets to be discarded and replaced,” a blank utilitarianism where, either under the auspices of ruthlessly exploitative capitalism or kleptocratic communism, the same small cabal of globalists stands to become unfathomably wealthy and powerful.

[4] The New York Times even hilariously posited that the social media accounts posing as NPC drones might in fact be Russian bots trying to influence next month’s mid-term elections. Irony, they know thee not.

« Classics in an Age of Confusion