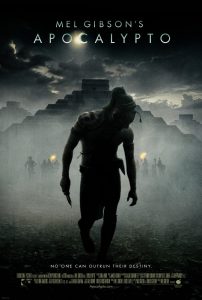 Mel Gibson’s Apocalypto is set in present-day Los Tuxtlas, Mexico in the year 1511 and depicts the final days of Maya civilization through the eyes of a man named Jaguar Paw. The main theme of the film is summarized by the Will Durant quote displayed at the beginning: “A great civilization is not conquered from without until it destroys itself from within.”

Apocalypto is hard to find: it is not sold on iTunes (except in New Zealand & Australia) or offered by any major streaming service (except Amazon in the UK). You can either torrent it or purchase the DVD. A low-quality version is also available on YouTube. Given the extent to which Mel Gibson is reviled by Hollywood Jews, one wonders whether the film’s limited availability is not coincidental. One would expect a recent blockbuster film by a renowned director to have a wider distribution.

The plot of Apocalypto is straightforward, and there is not much dialogue. It is not a cerebral film, despite its weighty social commentary; it is a blood-soaked and brawny visceral action-adventure film. Gibson was influenced by Cornel Wilde’s survival film The Naked Prey.

The film does not fall short of its epic ambitions, and its success is a testament to Gibson’s vision and his technical mastery as a filmmaker. Even his many enemies have to admit that he is one of the most talented directors alive today.

Apocalypto’s opening sequences depict village life among Jaguar Paw and his tribesmen, showing them hunting in the forest. The dialogue is in the Yucatec Maya language. The viewer gets a taste of their primitive customs: they are shown eating organs, running about flailing their limbs, etc. After a short while, the village is raided, and all adult villagers are either murdered or taken captive.

The captives are led on a long march to an unnamed city. Along the way are signs of the ecological destruction that contributed to Maya civilization’s decline. They pass by one forest that has been razed to the ground entirely. They also encounter a diseased girl who prophesies the demise of the Maya.

Upon their arrival in the city, the females are sold into slavery, and the males are brought to a pyramid in order to be sacrificed to the god Kukulkan. The inhabitants of the city are decadent, corrupt, and neurotic. There is a large gap between the poor and the rich, with laborers coughing up blood as they pound rock on the one hand and the extravagantly dressed, plump upper class on the other. The high priest is a sadistic executioner and a charismatic demagogue pandering to the restless mob with bread-and-circuses spectacle. He stabs his victims and holds aloft their still-beating hearts while the mob cheers. The victims’ heads are then tossed down the pyramid, and their headless bodies are dumped in mass graves.

Jaguar Paw is nearly sacrificed but is spared after a solar eclipse convinces the high priest that Kukulkan’s thirst has been sated. He manages to escape, and the rest of the movie is an extended chase scene. It is long, but the skillful camerawork and throbbing score give it momentum and a gripping immediacy. The chase does not end until the raiders meet Jaguar Paw on the shore and spot conquistadors on the horizon.

The dichotomy between the primitive tribesmen and the decadent city people illustrates the extremes of the excesses of savagery and the excesses of civilization (luxury, neuroticism, etc.). Faced with the choice, Gibson’s sympathies lie with the former. The savages at least have a sense of honor: when one of the captives spots a sickly city-dweller wailing in the streets, he tells him to “die like a man.” Yet there are limits to their primitivism, evidenced by their inability to progress beyond an animal-like state. This is most obvious at the end of the film when the splendor of the Spaniards’ ships is juxtaposed with the tribesmen. Perhaps Gibson is making a statement about the necessity of achieving a balance between barbarism and civilization.

There are a few deviations from historical accuracy in the film. The large-scale practice of human sacrifice was more characteristic of the Aztecs, and victims of Maya human sacrifice were typically of higher status. The ships at the end would place the film in the early sixteenth century, but the setting and costumes are generally more reminiscent of the Late Classic Period (c. 600–900). But such quibbles are of secondary relevance; the greater themes of the film would be valid even if the setting were fictional.

One thing the film gets right is that the burning of trees in order to facilitate the conversion of limestone to mortar was a likely factor in contributing to the Maya’s demise. Every major monument was covered in lime mortar, and the increasing scarcity of wood exacerbated the internecine conflicts that were already ravaging the empire. Other contributing factors included overpopulation, drought, etc. (it is one of the most debated questions in archaeology, and there are dozens of theories). By the time the Spanish arrived, most Maya cities had been abandoned, and Maya civilization had been in decline for centuries.

Gibson has compared the environmental destruction and overconsumption in the film to the consumerism of modern society. He has also likened the Iraq War to a form of human sacrifice (I am reminded of Adjustment Day).[1] It is clear that Gibson believes that modern Western civilization is likewise in a state of decline and that overconsumption, decadence/softness, and corruption are among the causes of this. He rejects the Whig view of history espoused by modern liberals: “People think that modern man is so enlightened, but we’re susceptible to the same forces – and we are also capable of the same heroism and transcendence.”[2] The title of the film itself comes from the Greek for “I reveal” and alludes to Gibson’s view that decline is followed by the uncovering of a new order in a cyclical process.

Critics who object to the unfavorable depiction of the Maya are missing the point. The film does not purport to depict the Maya at their height. Gibson and his co-writer deliberately chose to depict the Maya rather than the Aztecs precisely because they wanted to make a film about the fall of a great civilization, and the Maya were the more advanced of the two. The artistic and scientific achievements of the Maya during the Classic Period heighten the dramatic import of their downfall.

The distinguishing features of a civilization in decline are generally consistent across geography and time, and the parallels to the modern West are clear. We were once conquerors, but now we are the conquered. But, if Gibson’s view holds, a new beginning will someday emerge from the ruins of our dying civilization.