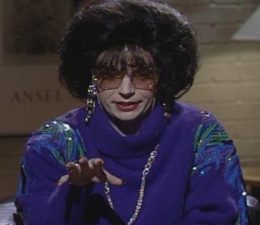 My aim is to bestow upon you the scheming power of yentas. With this wisdom, you can scheme against whichever arrogated white male gets in your way.

First, you’ve got to do some research on him. Mine for gossip from all the women who know him. It’s guaranteed that not all of them will like him, and you can slither down the tree of gossip until you find the root of every story. Don’t worry about whether the stories are true. It would be foolish to fall for the naïve ethic of goy women, who the white male patriarchy has brainwashed into thinking they must be honest. We yentas know effectiveness matters more than truth, and this is the fundamental source of our empowerment.

Once you have found the sources of the worst stories about him, don’t let the information out right away. Bide your time and wait for an important moment in his life. It could be for a job promotion, like Kavanaugh’s Supreme Court appointment, or an application to law school, or even a few weeks before his wedding. The important thing is that you get the timing right so that if the scheme is effective, he feels like he lost something that was already his. This is the best way to mortify him.

It’s important to make sure that at least half of the accuser’s allegations are believable. For example, if she says he groped her in a restaurant, then make sure he in fact attends that restaurant frequently. By getting him to admit he frequents that restaurant, you can stir up suspicion in people’s minds.

As you unleash the worst of the allegations against him, pretend like you are the great protector of women. Make sure at least a few of his “victims” aren’t yentas, so it doesn’t look like an entirely kosher affair. If your scheme works, imagine how powerful you’ll feel by having crushed his hopes!

After he learns of the false allegations, he may become angry and shout with frustration. You can then use his behavior to claim he is unhinged, and that one would expect such an unhinged person to commit such a deed.

If he loses his job opportunity, law school bid, marriage, or whatever, then we feminists will laugh a quiet, knowing laugh. We will relish in his whimpers, cries, and heartache. Empowered women of all backgrounds should follow the yenta’s strategy to overthrow the fascist white male patriarchy and make more room for women, people of color, and good Leftist men like Chuck Schumer, Harvey Weinstein, and Al Franken.