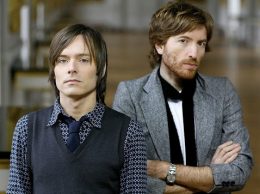 Having driven the length and breadth of Western Europe and in parts of the East, one thing has struck me on the long hours on the road: French radio is probably the worst in Europe. Most of it consists of bourgeois chatter, like their television. French radio also has a commitment to “French” songs, largely meaning songs in the French language and generally meaning rap music, which is not French at all. This has been going on for quite some time; during the 1980s there seemed to be a transition from the indigenous French tradition of the chanson, a modernized form of lyric-driven song that traced its roots as far back as the ancient troubadours of the Middle Ages and sung by the likes of Jaques Brel, Édith Piaf, Dalida, Léo Ferré, and Charles Aznavour, who died on Monday; a transition to Black American influenced rap and hip-hop that gained in ascendancy just as the non-white population began to explode in mainland France. Zouk also rose at the time, coming as it did from the French Antilles and was organic to that section of the population, but synth pop, which emerged during the 1970s, was completely overlooked.

France is a difficult proposition. As a country, it is a political rather than a natural construct, an amalgam of many peoples who are meant to subscribe to a single post-1789 ideology. In the east there are Germans, the south-east Italians, the south-west Basques and Catalans, the west Britons and Danes, the north Flemish. This is before we start with Outre-mer. One has to realize that Outre-mer is not made up of colonial entities, but departments of France. This means that the Negroid and Mulatto populations of Guadeloupe, Guiana, Martinique, and Réunion are just as French and perceived as such as the white Europeans on the mainland. Then there are the Arab French from North Africa, because again, Algeria for example was not considered a colony, but a part of France in all legal and political matters. Many Arab Algerians fought for France in the War of Independence and moved to mainland France after the war, because they held French values, and Arabs who had fought for France were in any case tortured to death by the victors. That is the theory. In practice, each group looks after its own ethnic interests – with the exception, of course, of the white Europeans who created France both pre- and post-1789. Back to our subject, and one can see why a form of music that was white European might have been disprivileged.

It is of course speculation to an extent, but it cannot be denied that non-white ethnic groups have all had their radio stations that cater for their musical tastes, whereas whites have not, unless one counts the classical stations Radio Classique, Accent 4, and Musique. NRJ, Mouv’, Skyrock, Black Box, Urban Hit, and Ado FM (renamed Swigg this year) are dedicated to rap, hip-hop, R&B, and black electronic dance music; Radio France Maghreb and Orient cater for Arab tastes; Latina caters for Latin American and creole music. Mainstream stations also tend towards contemporary non-white music in the way that BBC Radio 1 (and increasingly Radio 2) has done. Acts like IAM and MC Solaar have had number 1 hits and pushed black power messages by using the Sklavenmoral of affecting humility and claiming to be downtrodden and oppressed by the colonial whites of the past while simultaneously self-aggrandizing on racial lines. They were also aided and abetted during the 1980s and early ’90s by Jewish culture minister Jack Lang, who publicly declared that he hated classical music and loved hip-hop and rap.

French white electronica probably owes its limited success to Jean-Michel Jarre, who was fortunate in that he was born into music aristocracy, his father being the composer and conductor Maurice Jarre, and was educated in part by Jeannine Rueff and the electronic and digital music wizard Pierre Schaeffer of the Conservatoire de Paris, which opened doors for him from the beginning. He also has the right politics, meaning the globalist Left politics. It has to be said, though, that his fame was also due to his not inconsiderable talents, and after early, modest successes, the albums Oxygène (1976) and Équinoxe (1978) were groundbreaking in the genre, putting him at the forefront of the European pioneers, along with the likes of Brian Eno, Conny Plank, and Kraftwerk. To a lesser extent, there was also Alain Goraguer, who turned to electronica for the soundtrack to the prize-winning animated science-fiction film La Planète sauvage [2] of 1973. Yet France ignored all those who followed in their wake. The list of names marks their anonymity: Philippe Guerre, Dominique Guiot, Patrick Vian, Teddy Lasry, and Jean-Pierre Decerf and the bands Ose and TGV, are just some of the names you have never heard of. Whereas Britain had the likes of Brian Eno and Germany had the likes of Conny Plank to mentor and promote emerging talent, the French had no outlet, and by the early to mid-1980s, barring Jarre, French electronica was no more.

A decade later, from nowhere, the band Air appeared. Having had no real French electronic tradition to follow, they created a French interpretation of British and German electronic music by fusing their synth-based and experimental artistic influences like Brian Eno, David Bowie, Joy Division, Cluster, and Kraftwerk with French inspirations Maurice Ravel and Michel Legrand. The result is European electronica with a distinct French flavor. Unsurprisingly, French radio ignored it until the band became successful in the UK, forcing it onto the French airwaves. Air’s debut EP after being signed by British record label Virgin, Premiers Symptômes, charted at number 12 in the UK and failed to chart in their native country, but their first full album, Moon Safari, became such a smash in the UK that it could not be ignored elsewhere and went on to go gold in France, but double platinum in the UK. While they did not have the same level of success in the 2000s as in the late 1990s, neither were they a flash in the pan, and have released several decent to good albums since.

Air has sometimes been labelled as part of the French House musical genre, which is rather a tenuous label in their case. Certainly, French House was very popular over a decade from the late ’90s, with bands like The Superman Lovers, Stardust, Cassius, Justice, and Daft Punk finding fame on both sides of the Channel Tunnel and usually writing lyrics in English. Perhaps one reason the genre was allowed to flourish in France was the racial as well as musical crossover, in that the electronica was blended with house, disco, and funk. Daft Punk have really moved ever further towards electronic funk and disco in the last few years and are becoming ever more commercial. Equally, there is nothing that could be called quintessentially French about their music and, while it is above the average level of pop, it is equally as rootless.

What is interesting now is that pure European electronica has moved back towards the pre-house early 1980s for inspiration, resulting in the retrofuturist synthwave and its harder-edged (both politically and musically) Alt Right offshoot fashwave, led by artists like Xurious and Behemoth. Yet in these subgenres, one can hear a relationship to the French synth music outlined above, even though I doubt the composers of this contemporary music have heard of their predecessors. This is what we mean by a racial consciousness in relation to aesthetics.

And now onto the most important part of this article: my partner in thoughtcrime, Neil Westwood, has begun a music project to which I have contributed a few lyrics. As the piece above shows, the tone is generally more ambient than that of fashwave and the lyrics are more thought-provoking and non-political. It goes without saying, though, that both music and lyrics are inherently Eurocentric. We do, however, need a singer, as neither Neil nor I are gifted in that department, so please contact us in the comments section or by e-mail to submissions (at) counter-currents.com  if you are willing and able to join this unique cultural project. Infamy awaits!

This article originally appeared at the Mjolnir Magazine [3] Website. Be sure to check out Mjolnir‘s YouTube channel, Mjolnir at the Movies [4], which features film commentary from a Right-wing pagan perspective.