Bonfire of the Dunces 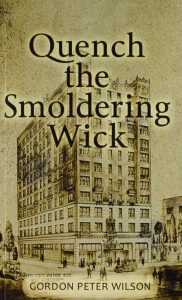 “I want to fit in!” — Patrick Bateman, American Psycho

Whatever one’s opinion of A Confederacy of Dunces, it surely must be the funniest book ever to take place in New Orleans, a city that seems to attract a more somber muse, such as Tennessee Williams or even Anne Rice.

So, when a book arrives in my mailbox, from an unknown author, that appears to be – indeed, boasts about being – a comic novel set in New Orleans, one can’t help but make comparisons.[1]

By comparing this work to Dunces, I by no means intend to suggest the work is derivative or unoriginal.[2] It’s quite funny, though perhaps not as uproarious as Dunces is at times. It’s shorter and tighter, confining itself to one day, morning to about mid-afternoon, through which its characters run their paces, occasionally doubling or echoing each other,[3] until they achieve their rendezvous, as if Dunces had been confined to its last few chapters.

Oh, and this time there’s a mass shooting at the end; hey, it’s the Current Year.

True, Wilson has not created a single character as epic as Ignatius Reilly, yet he has set out to do something just as difficult, if not more so.

Reilly amuses because he is literally monstrous, a set of quirks and character flaws all too common on the Old Right (and persisting, in new ways, among the denizens of the Dark Web today), blown up to comic dimensions, like Gargantua or Don Quixote. Toole was able to avail himself of the freedom of farce, liberating himself from the chains of verisimilitude, but Wilson has created a gallery of characters that, for all their eccentricities, are quite three-dimensional and believable: they rattle around in a world which, though somewhat exotic (being New Orleans and all), is recognizably our world – at least, the United States – closely and fearlessly observed; more on that anon.

This “non-fiction novel” element moves Wick from the picaresque realm of Dunces to the realistic, almost non-fictional, world of Bonfire of the Vanities, as if Tom Wolfe had set his novel in his Southern home rather than ‘80s New York City.

The usual Wolfe themes are here: adultery, pretentious snacks, fast and expensive cars; a Bauhaus-themed party among the social elite might be a shout-out to Wolfe as well. But what’s most important here is the careful delineation of social class, mostly via patterns of consumption, and the inevitable anxieties associated therewith. A husband comes downstairs expecting to see his wife attired in her “juice-box mommy daytime weekday wardrobe”:

Instead, he’s disconcerted to find that she’s in her “workout gear”:

Lulu Lemon runner-skirt (he recognized it from the upside down horseshoe logo), a racerback tank in hot pink and a Soju light blue running bra (showing). Her shoes were neon green, fuchsia and chartreuse Brooks brand minimal running shoe with no-show anklet socks. She wore a yellow Fitbit heartrate monitoring device on her left wrist. He remembered she had purchased this get-up at one of her friend’s private-home, husband-sponsored trunk shows, the profits of which were no doubt eaten up by the catering costs for goat cheese crostinis with fig compote, ham and Gruyere thumbprints, Caprese salad skewers with bird’s eye pepper balsamic drizzle, sparkling cranberry Brie bites, blistered counterfeit glance beets and double elephant sheet pastry chouquettes.

The menu descriptions were obviously composed by menu consultants to sound exotic and daring but the dishes themselves were prepared to accommodate the finicky diner, the unsophisticated palate, the trepidatious culinary sniffler known as the Food Pussy. Many of Maunsel’s closest friends [i.e., fellow WASPs] were Food Pussies of one sort or another: this one doesn’t eat beets and that one doesn’t eat anything white. “I’m not really a pastrami guy” one would say or “I’m not a sushi person” or “I don’t eat anchovies.” Grown men would say these things out loud, even though they were aware that such peevishness would be viewed as infantile or even dainty, but so terrified were they of putting anything more daring than chicken fingers in their mouths that they were willing to suffer the ignominy— men who were never told to eat their peas as children: Food Pussies.

Maunsel couldn’t help but feel that the experience was beneath him but the prospect of sex with Kirsten overwhelmed all that was distasteful. He suddenly had a craving for anchovies.

This quality of comedy rooted in minutely detailed sociological observation makes this work almost unique among contemporary fiction, at least since the death of Wolfe himself. I would not call this an “Alt Right novel” – despite its multiply-murderous climax, it lacks the anger and autism of most Alt Right fiction – but perhaps rather “post-Alt Right.” It’s about time.

As Steve Sailer would say, the Dissident Right notices what the Leftist hegemony ignores or outright denies.[4] Perhaps this is why naming is such a concern:

Sicilians had emigrated to New Orleans about the same time that his ancestors came from Eastern Europe, but Shale wondered why they could never wipe away their immigrant patina. They didn’t even change their names to seem less ethnic.

Society Catholic girls in New Orleans, as opposed to Irish or Italian or Croatian ones who lived in Metairie or Kenner or Chalmette, all had gallophile names with lots of vowels like Haydée, Mathilde, Renée (“Ruh-NAY”), Aimée (A-MAY”), Amélie (“AH-muhlee”) or Mignon (“MEE-yon”).

And combining the two memes:

Gretchen had noticed that black males under the age of 20 had names with an even number of syllables, either two (Knowshawn, Keyshawn, Marshawn, Tayshawn) or four (Cleanthony, Demariyus, Jadaenean, Barkevius), but that black girls had names with three syllables (Lakeisha, Senesha, Lashondra, Sequoia).

Even though she spent most of her time within the city limits of New Orleans, Kirstin never lost her appreciation for Metairie as a lodestar of sophisticated city life. Metairie was only halfway to New Orleans from [her home in] Destrehan and you didn’t have to worry about black people.

After centuries of bouncing around in the Big Easy, even the races have precipitated out into rigid strata:

His mother, like many American Episcopalian women, was anti-Catholic, mostly because she found them displeasing to be around in a, well, ethnic, fishmonger, body odor kind of a way. In New Orleans, it was difficult for Episcopalians like Maunsel’s mother to express their dislike of Catholics who, after all, occupied an elevated social position inherited from the original French oligarchs of the colonial period. Unable to condescend openly to Catholics as was customary in New England and among the Knickerbocker elite in places like Suffolk County, Episcopalians in New Orleans like Maunsel’s mother simply joined Planned Parenthood. . . . Being anti-abortion [sic] was a way for Episcopalians to segregate themselves from Catholics on the opposite side of a very bright line.

The “French oligarchs” also left their mark on the Negroes:

Jupiter resented Brandon Cazenave’s attitude and the Creole condescension that had been a part of intramural black relations since New Orleans was founded.

They attended Corpus Christi Catholic Church and carried on their lives as a segregated sub-group. This neighborhood produced those well-to-do, freckle-faced mulatto politicians, mostly female of late, who, with the sentimental votes of race-conscious whites, served on the city council, utility commissions, domestic courts and what was left, after Hurricane Katrina, of the Orleans Parish School Board. These female politicos always hyphenated their last names, which irritated Jupiter. In the 1980’s and 90’s they started retaining their birth names after marriage to take advantage of any familiarity black voters might have with their activist fathers from historically established political families from the civil rights era. Eventually, these light-skinned Creole women adopted the practice of hyphenation to separate themselves from the unwed Baby Mamas from the projects whom they secretly scorned. Jupiter hated them for this haughtiness. More than that, Jupiter despaired at the prospect of an already maternally based domestic black underclass becoming maternally based on the political level as well.

As we’ll eventually find out, you don’t want to incur Jupiter’s wrath.

I haven’t been able to locate any information about the author, although he seems to be real, given there was some kind of book launch in New Orleans – that must have been a scene!

If I have any negative criticism, it’s that the presentation suffers from being a kind of homemade job. Toole’s book was famously rejected by dozens of publishers, finally finding a release when, after his suicide, his mother persuaded the famed novelist Walker Percy to recommend the work to Louisiana State University Press (where it must have proved quite a cash cow). These days, authors need not find themselves in such desperate straits, and we can be glad that Wilson has chosen to self-publish this fine work. However, the Kindle edition is a formatting mess (though not enough to seriously impede your reading pleasure). Even the print edition seems to have a number of typos, some of which break the flow and even – such as changing “pro-abortion” to “anti-abortion“ in one of the quotes above – affect the sense.

I hope these can be corrected in future printings – which will be needed, as all of you reading this ought to be buying out the current printing. Indeed, it’s hard to believe a mainstream publisher wouldn’t be interested in taking this up and giving it a major release, promoting the author as a new, edgier Wolfe for the Age of Trump.

[1] Kandi: “Well, I’ve never slept with brothers before. I mean at different times. And one can’t help but make comparisons.”

Charlie: “No kidding. So how big a difference are we talking about?”

Kandi: “Oh, yeah. With you, sex is kind of like going on Space Mountain. It’s a good ride, but there’s never any real danger. With Alan, it’s like being in the back seat of a car driven by a really smart kangaroo. He may go up on the curb a couple times, but he’ll get you there.”

[2] Perhaps the author – I think so – acknowledges the inevitable comparison with a shout-out: “We are going to be conspirators! We are going to be confederates in a tactical caper!” This character, Shale Gimmel, is himself a close analogue, in occupation and ethnic background, to Dunces’ Gus Levy, of Levy Pants fame. He’s also afflicted with Demon Embarrassment, a sort of Judaic counterpart of Ignatius’s Fortuna. There’s also a “Jewish clothing salesman named Hyman Levy.”

[3] For example, there are two married couples, one Jewish, one Episcopalian; the husbands are both having affairs, with, unbeknownst to them, the same bimbo. Each, in his interior monologue, echoes the famous line about Boston, where “the Lowells talk only to Cabots, And the Cabots talk only to God,” altered to New Orleans and their own ethnic group.

[4] “All of this flashed through Maunsel’s mind in an instant, aware of it, as he was, on a sub-cellular level.”