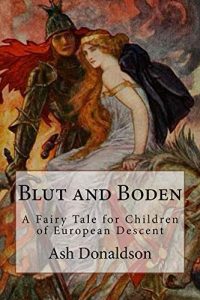 Mythology has always been the tie that binds. Familiar stories from long ago featuring archetypal characters and illustrating universal themes, as well as those specific to a particular race, nation, or tribe, provide common reference points among extended kin. Without myth, there is less love, less trust, and less reason to join together and fight or do great things. Humans seem to have a need for myths, since they have always created new ones whenever they haven’t inherited them. American whites got off to a great start more than two hundred years ago with various myths surrounding the Founding Fathers and others who contributed to our early national character. These days, however, whites are watching their myths being supplanted by those of hostile minorities in their own nations. This is indeed a crisis. Author Ash Donaldson takes the first step in rectifying this with his splendid book, Blut and Boden: A Fairy Tale for Children of European Descent.

Donaldson delivers exactly what he promises in the subtitle by constructing a new mythology, told largely from a North American perspective, that serves the worldwide white diaspora, if we can call it that. While not explicitly offensive to them, non-whites will have little use for these stories. Blut and Boden highlights what whites have in common; it stresses their great accomplishments and identifies the greatest threats to their existence. Most importantly, it fosters a racial identity in the manner of all great myths. That this work is tailored towards children makes it all the more important for white identitarians the world over.

In the primordial chaos of Donaldson’s world, giants, elves, and dwarves vie for control of the land. Each of these races are magical in their own way and embody common elements of the white character and experience. For example, Storm Giants represent the dangerous power of rage and hate, but they also provide the power for moving ships, and water to bring life to plants and animals. Elves represent our creative fascination with beauty and intricacy, but at the same time carry with them a tremendous capacity for sadness. While none of these creatures are unambiguously evil, the giants are the most destructive. In a story which is clearly an allegory for the Ice Age, the Frost Giants descend from the frigid north and wipe out the five great elven kingdoms of North America, one by one.

Only a young prince and a handful of elves manage to escape the continent. They flee east, to the elven kingdoms of Europe. There, the prince, Boden, grows up to be a great king who finally repulses the Frost Giant horde and wins victory for the elves. But the elves do not do it alone. A younger race, the humans, assist them; but not all humans dare to do so. Only the hardiest, strongest, and noblest humans have what it takes to stand alongside the elves. These are the Aryans, the sons of Arius, and they are the white humans.

Donaldson ascribes two major advantages that the whites have over their darker brethren. One is evolutionary:

Thus was this new race shaped in outward form. But inside, as well, these men and women were being forged like a sword in a dwarf’s anvil, and their children grew up tough. Unlike the races in sunnier lands, who could survive year-round with or without dwellings, those of northern Europe had to build houses that could withstand the long, harsh winter. Those who did not build well died from the cold. To find food in the frigid winter is not easy, so only the cleverest survived. They went on long hunts across frozen landscapes that one could scarcely navigate. To survive, they had to reason, remember, and plan.

Nicholas Wade makes similar points in his famous work, A Troublesome Inheritance [3], as do many other race-realist scientists and researchers. The last Ice Age created a great evolutionary bottleneck that selected for the very traits that allowed Europeans to not only survive but thrive in some of the harshest climates on Earth. This in part explains many of the genetic advantages whites have enjoyed and still enjoy over other races. Donaldson essentially distills Darwinian ideas into a fable in language that any child can understand. A white kid going into middle or high school knowing that he is descended from champions who withstood the Ice Age, as personified by Donaldson’s Frost Giants, will have some mental defense against the corrosive influence of Cultural Marxism and racial diversity. He will be proud of his past and unapologetic about his skills and intelligence . . . in part because of the power of myth.

The second advantage whites enjoy in the story involves the elves themselves. Donaldson describes how through proximity with elves and dwarves, white people became more like them. Perhaps they emulated and admired these older beings, or perhaps they learned from them directly. In any event, no other race of human benefited in such a way. The most poignant manifestation of this comes in the form of the elf queen Blut (pronounced bloot, like “flute”). Of course, she is beautiful and fearsome. And of course, she falls in love with Boden. When Boden asks for her bidding moments before the final battle with the Frost Giants, she tells him she wants slaughter. Not only does Blut represent the high regard and status white men – and only white men – have shown for their women throughout history, she also embodies what’s known as “Blut’s Gift.” This she bestowed only upon whites, and it is the reason why Caucasians have such a wide variety of color in their eyes and hair.

As humans ascended in Europe, the elves and dwarves declined in numbers, since many were departing for other worlds or, in the case of the dwarves, were choosing to stay underground. The few who remained decided to live among men and assist them whenever they could. Donaldson provides examples throughout history of mysterious and beautiful men and women doing miraculous things, especially when it came to carving out a civilization in the wilderness of North America.

Of course, no myth or fable can exist without suffering and loss. Donaldson explains how a devious giant tricks a heartbroken orphan boy into poisoning the human water supply with a potion of forgetfulness. Like all good myth writers, he is vague about the time and place, but this seems to have happened at some time in the nineteenth century. As a result, whites forgot their common heritage and their shared history with the elves and dwarves, as well as their special place in the world. It was this forgetfulness which led to the terrible European wars of the twentieth century. Donaldson refers to them as brothers’ wars, a deliberate counterpoint to the prevailing myths of the World Wars, which are explicitly anti-German in nature. This forgetfulness has also led whites to turn their backs on their ancestors and traditions, as well as to open their doors to immigrants of all races who do not share Blut’s Gift and the whites’ great pedigree.

But the seed for renewal has been planted. In response to the taunts of a fire giant about the fickleness of men, Boden avers, “The fewer the true sons of Arius that remain, the harder they will fight. Such has always been the Aryan way.”

In Blut and Boden, many will see Donaldson’s debt to Tolkien. The similarities are obvious, as the trappings of fantasy literature are everywhere in the work. This will no doubt attract young readers who have been raised on the Star Wars movies and Harry Potter novels – not to mention The Hobbit and The Lord of the Rings – and expect elements of the fantastic in whatever they read. But Tolkien’s stories are a soft touch compared to this. One can compare Tolkien’s Middle Earth to Europe consumed by the World Wars, but by making good and evil so obvious, and by making sure that basically everyone gets what they deserve in the end, Tolkien’s works and themes rarely transcend their genre, despite being its very epitome. It’s brilliant, grown-up storytelling of what amounts to young adult stories.

Blut and Boden, on the other hand, is storytelling in the style of young adult literature, but for adults. It is metapolitics for children, if you will. These are fables and fairy tales, but what they depict is as real and as destructive as smallpox and the bubonic plague (“Ashes, Ashes! We all fall down!”). In this sense, Donaldson’s work relies on the insights of Joseph Campbell, and draws more upon Tolkien’s literary and mythological sources rather than from Tolkien himself.

The tragedy of the loss of Europe and the crisis white people face today haunts these stories on almost every page. Blut and Boden portrays tragedy that bleeds throughout history and into the modern world. It’s an allegory for the past, present, and future. It – and literature like it – must be read by white children everywhere so as to ease them out of their forgetfulness and make them remember to be sons of Arius once again.

And somewhere people are asleep even though they walk about. Yet somewhere, too, children dream of things truer than what they know when awake. And somewhere visions still stir the blood and take firm root in the soil.

Spencer J. Quinn is a frequent contributor to Counter-Currents and the author of the novel White Like You [4].