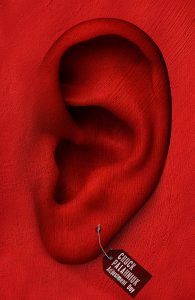 Adjustment Day is Chuck Palahniuk’s love letter to the Alt Right, describing millennial men joining forces to rub out modernity and its masters in a violent revolution, fragmenting the United States into independent homelands: Blacktopia, Gaysia, and Caucasia. A Judgment Day, misheard as Adjustment Day by its addled scribe, is a “big blue-black book” that becomes the omnipresent badge of allegiance to a confused translation of New Right ideals – part metapolitical doctrine, part Nietzschean polemic, and part compendium of direct commands for bringing about the much-needed “Adjustment.”

Palahniuk lays the blame for the drudgery and soul-destroying standardization of the modern world at the feet of liberal capitalism and the fact that wealth is a non-expiring entity, enabling power to be hoarded and transferred in the abstract so plutocrats can hide from the many in air-conditioned marble sanctums. Palahniuk reserves his most venomous barbs for contemporary academics, not unrealistically depicting them as drilling children on fatalistic, pan-gender nonsense to prepare them for an early death.

Through a decentralized narrative, the experiences of different characters showcase how the rule of numbers and corporate standardization has failed black and white alike. Much of the book is given to the perspectives of the revolutionary triggermen who make the secession of the fledgling ethnostates a reality, cold-bloodedly dispatching government officials, academics, and journalists and bulldozing their bodies into mass graves.

Unironically portraying ethnonationalists as crusading heroes, Adjustment Day is a novel about radically different individuals becoming conscious of their group interests. Within this narrative, the urgent need for an exclusive territory for these groups – a homeland – in order to feel comfortable as themselves and to provide a stable norm in which to pursue their own happiness is synonymous with self-defensive secession from a predatory, genocidal state.

The metapolitical narrator, Talbott Reynolds, repeatedly offers Right-wing, ethnonationalist maxims, and Palahniuk makes Right-wing, matter-of-fact observations that would be beyond taboo for any other author. For example: “Gays had been coerced into a two-dimensional identity that had reduced them to hypersexual behavior . . . blacks had been told they were powerless unless they became thugs.” He skewers the manic, journalistic tendency to hysterically froth about white “privilege” – something which led directly to Unite the Right by casting and galvanizing all racially-conscious white men into the same mold: “[White men] were being compelled by modern politics to rally under one flag as goose-stepping Nazi NASCAR storm troopers.“

Reynold’s blue-black book provides a crystallization of Ryan Faulk-esque “omniseparatist” doctrine, a revolutionary manual, and a common protocol for diverging groups to resolve their disputes. In the novel, it arrives in the nick of time, just as the Senate is about to unanimously approve a “war resolution” that will send millions of young men to a thermonuclear death in a “false flag” war. It also provides the template for the peaceful and humane resolution of the problem of different ethnicities (or, in the case of Gaysia, pseudo-ethnicities) clamoring for independent territory within the already fracturing United States, and averts both the foreign war overseas and a looming domestic conflict.

Adjustment Day is Palahniuk’s retelling of the metapolitical war the Right is waging against the mainstream, the forces of mass death, consumer capitalism, and engineered existential ennui, and here, the outcome is the reemergence and return to dominance of an explicitly white power bloc over the former United States, with areas cordoned off for blacks, cosmopolitans, sexual minorities, interracial couples, and general misfits (like your humble correspondent, who would be pulling the trigger for Caucasia but eventually joining the exodus to Gaysia to read in little queer cafés and eat Japanese food). In short, it is the restoration of a healthy norm of white, heterosexual self-consciousness, and the removal or eradication of fifth columns, be they Jewish, journalists, academics, or Congressmen who sought to subjugate, cull, and eventually render white men extinct to make way for “different strains of mankind . . . blended into an increasingly blander pool. A culture of shared mediocrity that only serves as a broader field of consumers receptive to the same generic advertising.” Ruled over by some Talmudic plutocrat with a blue check mark, no doubt!

Whilst Palahniuk is not (and probably never will be) an explicit White Nationalist, Adjustment Day is clearly a gift to our metapolitical project. It voices our concerns in an accessible, exciting way, even if some talking points are intentionally cloaked in confusing language. A Judgment Day is a postmodern book with varied fonts; a crisp, conversational, and straightforward writing style; vignettes of cameo characters to bring home different points; and a rotating cast of different perspectives – sometimes addled or fanatical, but always interesting and novel, if not valuable.

Those problems that arise from Reynold’s Revolutionary Doctrine – such as the one-for-one exchange policy between homosexuals waiting for visas to Gaysia and heterosexual children birthed and raised by reluctant homosexuals and lesbians – have solutions presented only a page or so later: a dowry and cash “liberation fund” to compensate the straight parents in Caucasia or Blacktopia for their homosexual child. (Other problems include the obvious ethical and practical problems of keeping someone interned in an open-air prison for decades at a time.) The straw-manning and caricaturing of the Right rings hollow, a shell game Palahniuk is playing to advance the counter-modern, nihilistic impulses he first depicted in Fight Club. Once the Right’s message gets out through the medium of Talbott Reynolds, the novel loses its urgency and becomes a guided tour of speculative “what if” problems.

Taken on its strongest merits, Adjustment Day is a consciousness-raising book to get Western men of all ages (especially white men) to realize who they really are – race and group interests included. Fast, funny, and furious, it surpasses Palahniuk’s former critiques of modernity, like Pygmy, which describes a Chinese Communist exchange student sickened by American decadence; and sits comfortably alongside other postmodern fiction tuned into the same demographic, like Douglas Coupland’s Hey Nostradamus!, JPod, and Generation A. It is a book written with intent, and clearly says so; Jamal, a black nationalist, repeatedly condemns The Grapes of Wrath’s characters for failing to make good on their revolutionary ambitions: “Those people running all over. Saying they need to strike back to fix the system. But they never do anything, just dig ditches for a nickel and give birth to dead babies. That book’s bullshit.” And again: “Adjustment Day was doing the opposite of that Grapes of Wrath book.”

Palahniuk’s offering is an incisive deconstruction of the floundering, mediocre status quo and a fierce, polemical call to action to sweep it away. The characters are inessential and the principal narrative tension centers on the need for Adjustment. The latter part of the book, while sadistically funny, is a less important outro to the revolution, and serves as an advisory to avoid the most banal and superficial forms of identity. Despite the possible farce of Caucasia’s ridiculous outfits and polygamous feudalism, it’s better to strive to create anew than it is to accept the sterile and sedative life of liberal democracy, a soft Communism that erodes the hardness of men like Coca-Cola on children’s teeth.

Excerpts from Adjustment Day should be printed out as flyers, posted around campuses, and distributed in the streets around the parliaments and media havens. Whilst Adjustment Day is not yet upon us, as a book it provides a beachhead, a bridge into the mainstream and a popularization of our essential ideas, so that those holding us captive to diversity can be cast out of office and into historical oblivion.