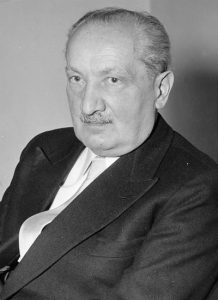 The following conversation between Martin Heidegger and a Buddhist monk from Thailand, Bhikku Maha Mani, was filmed for West German television in 1963, and English subtitles were later added. In it, Heidegger discusses the difference between the Western and Eastern conception of life, the need for a new type of thinking, the nature of religion, the true meaning of development, the prospects for world peace, and the relationship between man and technology.