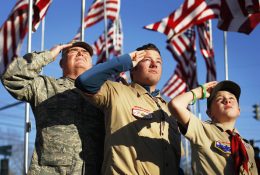 The other day I was driving down the freeway and blew a tire. It wasn’t a big deal. I’ve had worse. When you’ve changed a tire on the shoulder of the 5 on the Grapevine, nothing car-related bothers you too much. But it was about time to get a new set of tires, anyway, so I went and did so.

As I was waiting on a bench outside the shop, enjoying the Sun, an obnoxious Latina and her three brats approached and started arguing about God-knows-what a few feet away from me, while another white man, probably in his mid-70s and well-dressed in that casual, California country club style, happened to be hanging around waiting for tires as well. We exchanged glances, which then turned into mutual eye-rolls. The invader family finally waddled off to annoy some other corner of the city. The man sat down next to me and we started talking.

“What a bitch,” I said. This was very out of character for me, but I was annoyed enough to make this remark to a complete stranger. He laughed and said, “Yeah, they really send up the trash from down there, don’t they?” I agreed. He added, “And they don’t even let in Europeans anymore, you know.” It just so happens that someone I know had been denied the right to immigrate here from a European country about a month or two ago.

“What the fuck is happening to this country?” he continued. “You know, I’ve actually started to understand why people used to have revolutions. There’s only so much of this shit people can take! They are destroying this place!” I told him I completely understood and agreed with him. He clearly needed to vent, and I had given him permission. He quickly became rather emotional. “I don’t know what the fuck is going to happen. Everything has gone to shit. I feel like I am going crazy sometimes. I feel like I’m completely alone.” I looked at him intently and said, very slowly, making sure that he knew I was trying to get him to read between the lines: “Trust me, I promise you that there are a lot of us who are working very hard to fix this. There are more of us than you think, even in this area. You are not alone. I promise you.” He looked at me in silence for a few moments. He tilted his head a little bit, slightly unsure. Then he smiled and said, “Somehow I believe you.”

I felt the need to tell this story because each of us sometimes feels alone. We write, we protest on occasion, we put up flyers, we tweet, we make YouTube videos and podcasts; but in our personal lives, most of us don’t know many people who think like we do. Many of us don’t even share our politics with our families and friends. And even if we do, even if we are lucky enough to have some who support us, we are keenly aware that most of our fellow whites despise us and think that we are evil, un-American, and motivated by hatred and pathological psychologies. We know this is not true, but we also know that for some time to come yet, most people will be incapable of understanding this. But we press on, taking solace in our commitment to truth, beauty, decency, and the preservation of our race. Even when we can barely handle wading through the scum anymore, we put our boots on and do so. We do it day in and day out.

And for whom do we do it? For the white race: for the whites who love us and who despise us; for the white children of those who love us as well as of those who despise us; for the unborn whites who might never know our individual names or exactly what we did for them, but who will never have to deal with the horrors we will have helped prevent. And we do it for the angry, isolated, and frightened older whites who are watching, bewildered, as their country rots before their very eyes. I’ve said it before, but it needs to be repeated periodically: what you do matters. You will never know who you have touched or what kind of intellectual chain reaction your words and deeds have set in motion. Don’t stop. Ever.

The older man’s car was finished before mine. As he left the shop, he passed me and said goodbye. I watched him walk into the parking lot. Before he got out of earshot, he turned around and hollered to me: “Thank you! I feel better already!” I gave him a thumbs-up and reminded him, very loudly, “Don’t worry! We’ll be all right!”

People looked at me strangely, but I just smiled – because I knew it was true.