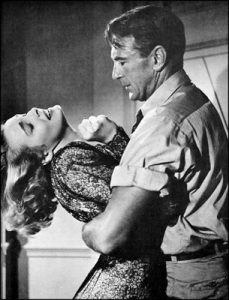 You know I always wanted to pretend that I was an architect.
–George Costanza[1] [2]

The Fountainhead is something of a rite of passage or gateway drug on the Right. Back in the 1960s/’70s it was more likely the movie than the book that one stumbled upon. I suppose I must have seen it on some afternoon movie show back in the ‘60s. Was it the Bill Kennedy at the Movies [3] show on CKLW out of Windsor, Ontario on Saturday afternoons?

It must have made some kind of impression on me, because I bought and read all the other books, in their chaste-white Signet paperback editions, and even subscribed to the Ayn Rand Letter (there was some kind of postcard subscription form bound into the paperbacks; remember that stuff?). I read through all the back issues that were bound up at the library, as well as its predecessors, The Objectivist and, yes, The Objectivist Newsletter.

Those were the days, when people like Rand, or Lawrence Dennis, or Wilmot Robertson – Right-wingers exiled from the smooth, well-moneyed world of Buckley’s Conservativism Inc. – would type out four-page bi-weekly missives, mimeograph them, fold them into No. 10 business envelopes, and mail them out to their tiny subscribers’ list. For some odd associative reason, they always called to mind cold, lonely mornings on a quiet street of a small town in far eastern Long Island.[2] [4]

At some point in this reading I must have been made aware of the Great Branden Schism, at least as publicly discussed, which happened back in the ‘60s, but I don’t recall much interest in it; it wasn’t my Kronstadt.[3] [5] I guess I simply grew out of it.

The movie doesn’t seem to get much love, even from Rand fans (Random?). Looking for a copy recently, I could only find a barebones Korean bootleg of the DVD from eBay; it doesn’t seem to have had an official DVD or Blu-Ray release, although you can view it on Amazon [6]; even TVTropes lists only the novel [7], not the film.

Over the weekend, TCM showed the film as part of its month-long Gary Cooper festival, and I decided to take a look. I found it to be . . . provocative, as strange as ever; and here’s some of my real-time observations.[4] [8]

[2] [31] I think this came from seeing the title of Whittaker Chambers’ Cold Friday (Random House, 1964), which I’ve never actually read. The image is recurrent in Burroughs, but of course I can’t find one right now, trust me.

[3] [32] “When asked the symbolic question of the precise moment of his “split” with Marxism-Leninism, “Comrade, when was your Kronstadt?” – a reference to the once pro-Bolshevik sailors who mutinied for food and pay and whom the Red Army mowed down like rabbits – [Daniel] Bell’s reply was as simple as it was indicting of his entire radical cohort: “Kronstadt was my Kronstadt.” “The Bell Curve [33]” by Michael Weiss [34]; The New Criterion, January 29, 2011.

[4] [35] I thought of formatting this by timecode, like, “He Writes! You Read! They Live” (reprinted in The Homo & the Negro: Masculinist Meditations on Politics & Popular Culture [36]; Second, Embiggened Edition, edited by Greg Johnson [San Francisco: Counter-Currents, 2017]), but I must confess some of these are second thoughts as the movie scrolled, so that would be both pointless and misleading.