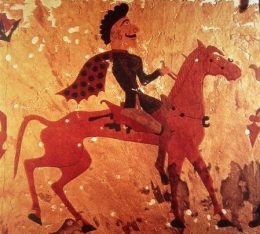 Painting of a Scythian warrior found in the Altai mountains, dated to approx. 400 BC.

The term “Turan” has experienced many uses and abuses ever since it was first coined. “Turan” originally referred to the less civilized northern Iranian semi-nomadic pastoral nations that had not adopted Zoroastrianism, while “Iran” referred to the more settled Zoroastrian nations of the south. But they were both of Indo-Iranian origin.

“Turan” first became misapplied to Turco-Mongolian nations starting with Muslim scholars in the Middle Ages, then this was further abused by the Magyar-identifying nineteenth-century Jewish historian Ármin Vámbéry. The Turco-Mongolian peoples actually appeared later, and were easily confused with the original “Turanians” (even though they were different people) because they had virtually the same cavalry culture-complex as the original Iranian-speaking “Turan.” The only difference was that the newer Turco-Mongolian conquerers had gunpowder.

“Turan” first meant the barbarian steppe-forest cousins from the north, according to the ancient Zoroastrian Iranians, the first writers to use the term. The original location of “Turan” was the Pontic Steppe north of the Black Sea. This area was the cradle of all Indo-European cultures, which all descend from the first culture in human history to domesticate the horse.

These mysterious horsemen and war charioteers quickly conquered the Thracian plain. Later, they invaded the rest of Europe and much of Asia. The tawny-haired, light-eyed ancient Scythian and Thracian tribes were the oldest and purest prototypes of this enigmatic primeval “Turan.”

Thrace represents the first time in history that a new form of law was born out of the Indo-European land-appropriation of Old Europe. The Pontic Steppe’s conquest of the south began at Thrace. It was history’s first conquest by “Turan.”

From 4200 to 3900 BC, long before the Indo-Europeans reached Greece or India, over six hundred Old European (pre-Indo-European) settlements “were burned in the lower Danube valley and eastern Bulgaria.” These Old European cultures tried to escape to a settlement in Jilava, but:

Jilava was burned, apparently suddenly, leaving behind whole pots and many other artifacts. People scattered and became much more mobile, depending for their food on herds of sheep and cattle rather than fixed fields of grain. The forest did not regenerate; in fact, pollen cores show that the countryside became even more open and deforested.[1] [2]

What was the nature of the new conquering culture? What did these hordes on horseback believe? According to Mircea Eliade:

. . . the Dacians called themselves “wolves” or “those who are like wolves,” who resemble wolves. Still according to Strabo (7. 3. 12; 11. 508, 511, 512), certain nomadic Scythians to the east of the Caspian sea were also called daoi. The Latin authors called them Dahae, and some Greek historians daai. In all probability their ethnic name derived from Iranian (Saka) dahae, “wolf.” But similar names were not unusual among the Indo-Europeans.[2] [3]

The horses they first domesticated were in fact ponies, a tradition that survived in the Romanian principalities into the nineteenth century. The “extremely sure-footed,” if joyless, Wallachian pony described by Field Marshal Count Moltke in his memoirs was actually the original Indo-European war chariot horse.[3] [4] Stout ponies were more suited to the ancient war chariot than large horses.

The confused association of Turco-Mongolian peoples with “Turan” has hopefully been dispelled by the above remarks, which shine a bit of light on what “Turan” originally meant. It was perhaps with the intent to restore the original meaning that Oswald Spengler named the ancient Indo-European culture-complex “Turan” in Frühzeit der Weltgeschichte, a posthumously published book written during the last years of Spengler’s life. In any case, Spengler’s concept is close to the historically correct definition. “Turan” originally described an Indo-European culture, not a Turco-Mongolian one.