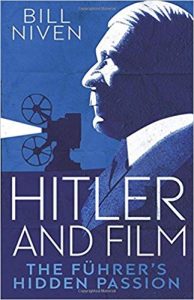 This book is a great companion to Frederic Spotts’ Hitler and the Power of Aesthetics [2]. The only shortcoming of Spotts’ book was that it did not discuss Hitler’s interest in film and his involvement in the German film industry. This book does just that. Niven argues that Hitler was very interested in film and that his influence on Third Reich-era film is often underestimated. Hitler was keenly aware of the power of film and sought to harness it for the purposes of National Socialism: “In a much shorter time, at one stroke I might say, people will understand a pictorial presentation of something which it would take them a long and laborious effort of reading to understand” (p. 2).

It was Hitler’s idea to film the Nuremberg rallies, and he hand-picked Leni Riefenstahl for the job. Hitler had watched Riefenstahl’s The Blue Light (1932) and was struck by its masterful cinematography, as well as the film’s proto-fascist aesthetic (shared by other mountain films of the period). In May 1932, he told Riefenstahl: “When we come to power, then you must make my films” (p. 52). The following year, he commissioned Victory of Faith (1933). Hitler was adamant that Riefenstahl have artistic control over the filming process and ordered party officials to leave her alone when they attempted to curtail her influence.

Hitler then commissioned Triumph of the Will (1935). He took a great interest in the filming process. He consulted with her about the film and very likely gave her directives. He also visited her in her Berlin studio.

It was Hitler who ensured that Riefenstahl was generously funded. After the war, Riefenstahl attempted to distance herself from the Third Reich and denied that her films had been financed by the regime. But she was aware that Hitler himself was responsible for the financing of her films. In 1935, she protested having to pay taxes on this funding on the grounds that she was an employee of the NSDAP.

Hitler had a hand in the production of a number of other propaganda films. One was Victims of the Past (1937), which he commissioned. The film depicts victims of hereditary diseases and was intended to justify the compulsory sterilization of the mentally ill and physically disabled. Every theatre in Germany screened the film at Hitler’s behest. Hitler also commissioned Battle against the World Enemy: German Volunteers in Spain (1939), selecting Karl Ritter as its director. The film documents the actions of the Condor Legion during the Spanish Civil War. (There was already a film on this subject, but Hitler thought it did not sufficiently emphasize the threat of Communism.)

Hitler was also very involved in the production of the weekly newsreels. Each week, Fritz Hippler sent a copy of the newsreel to Hitler’s adjutant office. Hitler would respond with directives and revisions. In his diaries, Goebbels mentions having frequent conversations with Hitler about the newsreels.

To a lesser degree, Hitler influenced the production of Jew Süss (1940) and The Eternal Jew (1940). Niven argues that Hitler’s January 20, 1939 Reichstag speech precipitated both and was interpreted by the German press as a call to create anti-Semitic films. In the speech, Hitler declares that “the announcement of American film companies of their intention to produce anti-Nazi–i.e. anti-German–films, will only lead to our German producers creating anti-Semitic films in the future.”[1] Jew Süss was described as a “dramatized Mein Kampf” (p. 171). Hitler also made suggestions to Goebbels regarding The Eternal Jew and supervised its production.

Veit Harlan was charged with crimes against humanity for having directed Jew Süss, but he successfully defended himself by claiming that he was under duress and that he had attempted to minimize the anti-Semitism in the script. Niven writes that this was a lie, and that a comparison of the script’s drafts reveals that Harlan actually intensified the film’s anti-Semitic message. Goebbels’ diaries confirm that he was cooperative. It is noteworthy that Harlan had also expressed anti-Semitic sentiments prior to making Jew Süss.

Indeed, most actors, actresses, and directors in Germany sympathized with National Socialist ideology. Several were personal friends of Hitler, who often entertained them at his Obersalzberg home and at the Reich Chancellery. Niven writes:

That Hitler stood at the very heart of the world in which all actors and directors had moved during the Third Reich was a fact quickly forgotten after the Second World War. Yet those actors and directors knew, many of them anyway, about his obsessive interest in Third Reich film. . . . They knew that acting in the Third Reich meant making propaganda films for Hitler’s beliefs and politics, and entertainment films to provide relief from the political pressures of living in Nazi Germany. The connection between Hitler’s beliefs and a number of Nazi-period films was plain to see. (p. 230)

In their post-war memoirs, actors and actresses under the regime relayed often fake anecdotes in which they rebelled against Hitler or otherwise mocked him. Marika Rökk recounted in her memoirs that she was the only celebrity who had refused to do the Hitler salute at one event. But at one point she had written to Hitler asking him for two signed photographs of him; when he obliged, she thanked him profusely and said that his photograph provided her with inspiration.

Hitler was generous in his support of actors and actresses. He gave them presents, awards, and titles, as well as tax concessions and military exemptions (for those on the Gottbegnadeten-Liste). He paid them quite well; the German press complained that actors and actresses were overpaid. In return for these privileges, actors and actresses were expected to participate in propaganda and to serve as cultural representatives of National Socialism, such as in Germany’s “Film Balls,” events Hitler financed that were intended to promote German film.

Actors and actresses often responded to Hitler’s gifts and recognition with effusive letters of thanks. When Hitler praised Emil Jannings’ performance in Hans Steinhoff’s Robert Koch (1936), Jannings wrote to Hitler: “Your recognition gives me strength and motivates me to go on committing myself with all my ability to the global reputation of German film” (p. 124). Jannings also wrote an article comparing Hitler to Bismarck and Frederick the Great.

The parallel between Hitler and Frederick the Great was a common theme in Third Reich-era films, Fridericus (1936) and Veit Harlan’s The Great King (1942) being two notable examples. Another notable film that made a clear allusion to Hitler was Harlan’s The Ruler [3](1937), which involves a steelworks owner with an autocratic style of leadership who is revered by his employees. He bequeaths his company to the “people’s community,” rebuking the financial greed of company board members. The depiction of the eponymous hero in Robert Koch also brings Hitler to mind.

Niven devotes a chapter of the book to a discussion of Hitler’s personal taste in film. Hitler was a voracious consumer of film and watched a movie (often two or three) every night from 1933 to 1939. This was said to be his favorite evening pastime. He watched adventure films, thrillers, historical epics, comedies, romance films, westerns, cartoons, and so on. Many of these were foreign language films. Julius Staub, Hitler’s adjutant, complained about Hitler’s avid movie-watching habits: “Last night, I had to watch three-yes, three!–films, and this morning another one. . . . The Führer has got unbelievable stamina when it comes to films. Unfortunately I am not remotely interested in them” (p. 10). During wartime, Hitler largely stopped watching films for entertainment (with some exceptions), though he remained involved in the production of documentary films and the weekly newsreel.

Hitler’s adjutants often recorded his reactions to the films he watched, though they seldom elaborated beyond “good,” “bad,” “very good,” etc. For instance, Hitler found Harlan’s The Immortal Heart (1939) “very good,” and Paul Martin’s Woman at the Wheel (1939) “very bad.”

Hitler would sometimes comment on the performance of a particular actor or actress. He dismissed Nights in Andalusia (1938) as “bad” but was impressed by Imperio Argentina’s performance. He went as far as to order the Propaganda Ministry to “win her over” for Germany. Other actors and actresses he admired included Greta Garbo, Henny Porten, Clark Gable, and Johannes Heesters. The rumor is that Hitler offered a reward to anyone who could capture Gable.

Hitler’s “List of Permanent Stock” (a list of films kept at the Berghof) also provides an indication of the sorts of films he liked. The list included films such as F. W. Murnau’s Faust (1926) and Tabu (1931), Hans Steinhoff’s The Old and the Young King (1935), and Emil and the Detectives (1931).

We can guess that the films that Goebbels gifted to Hitler in December 1937 are a fairly accurate reflection of Hitler’s film taste. These included Gerhard Lamprecht’s The Higher Command (1935), The Ruler, Willi Forst’s Masquerade (1934), and Carl Froelich’s The Dreamer (1936). This was supplemented with twelve Mickey Mouse films (which he loved, according to Goebbels).

Niven speculates that Hitler’s favorite film was Fritz Lang’s Die Nibelungen (1924). He thinks it is unlikely that either Snow White and the Seven Dwarfs or King Kong (the two films most frequently cited as his favorites) was his favorite film. According to Heinrich Hoffmann, Hitler watched Die Nibelungen twenty times. Goebbels writes the film made a deep impression on him. Hitler references the tale of Siegfried in Mein Kampf, in which he accuses “Jewish world finance” of having mobilized against “the horned Siegfried.” He again compared Germany, having been “stabbed in the back,” to Siegfried in one early speech. Hitler proposed the filming of another film based on the Nibelungenlied, telling Goebbels that he wanted “a truly grand and monumental film about the Nibelungs,” (p. 22), though nothing came of this idea.

Hitler also attended public film viewings in addition to watching films in private settings. The purpose of this was generally to demonstrate his support for various institutions, such as the navy, the army, the air force, the Hitler Youth, and the SA. At the premiere of Hitler Youth Quex (1933), members of the Hitler Youth saluted Hitler, who stood up and thanked them. Similar rituals took place at the premieres of Victory of Faith and Triumph of the Will. The public screening of Mario (1936), an Italian film about the early history of Fascism, was accompanied by choir performances given by the Hitler Youth and an Italian Fascist youth organization, symbolizing German-Italian unity. Hitler’s presence at the screening demonstrated his support for Mussolini and Italian Fascism.

Hitler’s grand plans for Germany’s future encompassed the German film industry. As part of his plans for Germania, Hitler wanted to construct a huge theater in Berlin that would fit 2,300 seats. He also wanted to found a film company based in Linz and build a theater there. He set aside 4.8 million Reichsmarks to refurbish the Bavaria Film studio in Munich and hoped to build an additional “grand studio” in the interest of advancing indoor filmmaking. He also planned to build two new studios for Leni Riefenstahl, anticipating that she would make many more films in the years to come. Tragically, none of these plans were realized.

Hitler was thinking centuries ahead. He was interested in obtaining film material “made from the finest metal” that would endure into the distant future: “Imagine if, in a thousand years, people could see what we are experiencing today” (p. 227). He expressed the wish to Riefenstahl that film had existed in past eras, so that “we could see films from the past, about Frederick the Great, Napoleon, and the historical events of the ancient world” (p. 227).

Niven shows that Hitler understood the metapolitical importance of film and that he influenced the German film industry both directly and indirectly. “The Führer has recognized the significance of film,” Riefenstahl writes in the accompanying book to Triumph of the Will. “The belief that a real, strong national experience could be re-experienced through film was born in Germany. The Führer gives contemporary film sense and mission” (p. 77). The National Socialists’ skillful use of propaganda—in which Hitler played an essential role—remains something that any group seeking political power can learn from.