A Guide to Primary Sources on Hitler for Researchers 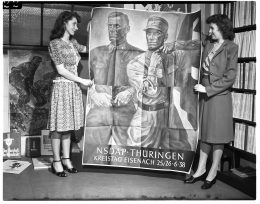 There is no disputing Adolf Hitler was of tremendous importance in determining the course of the twentieth century. Thus, whether one believes the German Führer was the most evil man to have ever lived or if one takes a more nuanced perspective, it is important to try to understand him both as a personality and as representing a world-historical phenomenon. The best guide for this, of course, is his own recorded writings and sayings. Hitler left a vast body of work over the course of his life but, unfortunately, these are often either unavailable in English or only in dubious editions.

The Italians, a people who granted themselves some self-respect after the war, collected their departed Duce’s Omnia Opera in thirty-five volumes, and these are even available online as PDFs. In contrast, Hitler’s works are scattered, and their rendition into English is patchy. There are a few translations of Mein Kampf and of his Second Book on foreign policy (highly recommended).

David Irving’s voluminous works, citing primary sources directly, are a goldmine of quotes from all the war’s major figures, especially Hitler. These can be purchased online or downloaded for free as search-able PDFs. Personally, I wish these were available as cheap paperbacks: I like to underline in the books I am reading, but feel like a criminal doing so in Irving’s luxurious Focal Point hardbacks.

The mainstream German historian Max Domarus put together an enormous, but still incomplete, four-volume collection of extracts of Hitler’s speeches, padded by the historian’s one-sided and largely superfluous commentary. In fact, even the texts of some of the famous speeches (e.g., Nuremberg 1934) are missing. The work is available in English in PDF format, floating around the Internet, which certainly makes this a useful searchable collection.

Concerning speeches, Domarus does rightly say these were in a sense the essence of Hitler. And as Hitler also rightly says, scribbles on slices of dead trees are a very poor substitute for the spoken word. So you’re better off binge-watching videos of him on YouTube, even if only a small percentage of Hitler’s speeches are online and even fewer are subtitled in English.

Only the spoken word can give one a sense both of Hitler’s message and of why so many Germans – often intelligent and idealistic Germans – found this message so compelling. We also doubtless get a taste of something deeper: of the fire animating an ancient barbarian army, intoxicated by their blood-gods in a mystic union before marching to conquer all before them. As Carl Jung suggested, through Hitler, we can get some sense of that blazing zeal which drove Muhammad’s desert armies or animated Odin’s berzerkers. We can only imagine the titanic voices of the primordial Yamnaya priest-kings and warlords, and how they inspired Nietzsche’s “blond beasts” to overrun and enslave ancient Europe and India . . . voices which are preserved only in the written words of Homer and the Vedas. (Actually, while an audiovisual recording is the best we can have, this is but a poor substitute for having been present in the audience of said speeches. As the composer Sergiu Celibidache said of his opposition to the recording of his performances, “Listening to a recording is like sleeping with a photograph of Brigitte Bardot.” In addition to the booming voice one can still hear, one must add the uncertainty as to what is about to be said, the feeling of being present at a truly “historic” moment with a tremendous concentration of transformational sociopolitical forces, and experiencing being part of the group which embodies those forces . . .)

We have only a selection of Hitler’s speeches online, but these include some of his most important: his 1933 denunciation of the now-proverbial “rootless, international clique,” his 1934 speech to the German youth (on solidarity), his famous 1935 speech in Triumph of the Will (making the case for the authoritarian leadership of an enlightened and spirited Party), his 1940 critique of capitalist democracy (one is struck at the similarity of Hitler and Chomsky’s critiques), and his final plea for resistance come what may, among others.

There are also more or less (often more) effective remixes popping up around YouTube which convey to us a mixture of what Hitler believed and what contemporary followers have chosen to emphasize – what resonates still. These are not unlike the selections one would make to form the collections of sayings attributed to an ancient founder. For Hitler, we have a representative sample of sayings on the war aims by and for Germany’s “every son”; the odes to the European Allies (with particularly enthusiastic clapping . . . for the French!), and Hitler’s astonishing exhortation to “dreamers” . . . (On that note, “The Impartial Truth” is clearly an extremely talented and effective video editor.)

Hitler repeated his teachings tirelessly, again and again: these are exhortations to unity, solidarity, effort, and self-sacrifice for the sake of the German community; to zeal, self-assertion, and leadership on the part of the (self-proclaimed) best elements of the German people; and the deprecation (sometimes quite unfair) of the assorted nay-sayers: Marxists, “the men of 1918,” pacifists, defeatists, the selfish . . . and in fact only occasionally Jews.

There is again and again the same narrative regarding German suffering, meaning the necessity of German effort and unity, which will lead to the great German redemption of power and prosperity, also for the higher development of mankind. Hitler’s oratory turns the German trauma of the early twentieth century into a great adventure, imbuing that suffering and sacrifice with tremendous redemptive meaning through a fusion of (understated) racial science and, more importantly, appeals to very, very deep ethno-religious psychological mechanisms.

On one level, Hitler’s public speeches suffice. That is what he inspired in the nation. Hitler was more straightforward than most politicians: what you see is what you get. At the same time, everyone feels Hitler must have had an esoteric dimension, secret teachings not fit for universal announcement. Here, we of necessity have very uncertain sources.

After the war, Otto Wagener, a National Socialist economist and one-time confidant of Hitler’s, wrote memoirs of his conversations with the Führer. There is an old translation in English (latest edition: Hitler: Memoirs of a Confidant, Yale University Press, 1985). Wagener’s reliability is uncertain, but his recorded conversations, in any case, bear witness to the quasi-religious feeling that Hitler could inspire in his followers (even one who, like Wagener, had been sidelined for years). Wagener says he wrote the book as “the guardian of the grail that holds the secrets of that [National Socialist] worldview” . . . Wagener’s book, if I recall correctly, was recommended by William Pierce, along with August Kubizek’s memoir of his experiences with Hitler as a young man in Vienna.

Most importantly, there is the notorious Table Talk. These purport to be Hitler’s private conversations during the war, as recorded by aides and edited by Martin Bormann. Who is to say if these are accurate? What’s more, the British historian Hugh Trevor-Roper’s 1953 edition, the only one in English, was apparently (and evidently) re-translated from French! Shockingly, no publisher or historian has since bothered to make a new, more accurate translation. A French editor has published half of the Table Talk in French in a volume entitled Propos intimes et politiques. Inexplicably, a recent Romanian edition has been translated . . . from this French edition! Are you telling me no one in Romania speaks German?

For what it is worth, David Irving vouches for the Table Talk and, from a pure impression, does feel close to what the real Hitler was like up close: one glimpses his titanic (there’s that word again . . .) plans for a great Germanic empire in Europe – federative, ecological, meritocratic for Germanics, under the leadership of a self-sacrificing military-political elite – including his absolutely callous and even murderous attitude towards the Slavs (Moscow and Saint Petersburg are simply to be razed outright, the Crimea is to be purged of its population, with little distinction made between the Bolshevik leadership and the Slavic population, although in general Hitler suggests keeping the Slavic masses in a state of “blissful” and impotent underdevelopment and ignorance rather than extermination). Historians: is this reliable?

There are also two major apocryphal works, Hermann Rauschning’s Voice of Destruction and Hitler’s supposed Political Testament. The former is a fake doctored by an enemy, the latter a fake apparently written by an admirer (François Genoud). The Political Testament is popular in neo-fascist circles and reflects pan-European sentiments. It is in fact quite an interesting document: written quite convincingly in Hitler’s style (if a bit too polished), but with a 1950s Frenchman’s preoccupations . . . Strangely, mainstream historians (Johann Chapoutot, John Lewis Gaddis) still quote these books as though they were canon.

Actually, if one takes a traditional perspective, apocrypha are no more or less legitimate than “authentic” historical documents. They embody what a great leader inspired among his followers (or enemies), and prescribe the enduring values of the community of the faithful. For Nietzsche, the truth was whatever empowered. The Spoken Word of Gautama, Muhammad, and Jesus all went through the editing of their respective councils of Wise Men to be preserved as written word in their canons. No doubt, had Germany won, the same would have occurred posthumously in regard to Hitler’s words at the hands of his Party leadership, within the bounds imposed by modernity (massively greater evidence is available given better capacity for record-keeping, and words are much harder to retract), eventually publishing Little Brown Books for the youth.

Speaking of which, who would not have paid to be a fly on the wall at the counterfactual Mao-Hitler summit of 1957?

In a civilized world, all these works would be available in multiple editions of Penguin and/or Oxford paperbacks, the better to compare translations for accuracy and fluency, complete with voluminous endnotes clarifying obscure passages and cross-referencing everything. Also, the historians would have made clearer which parts of these documents are reliable by combing through them and cross-checking, again, everything, as they do with everyone else. The unwashed masses, among them yours truly, would like to know!

There are of course far more works available in the original German: Werner Maser has a collection of the young Hitler’s Briefe und Notizen (although these don’t seem very enlightening); there is a collection of records of Hitler’s conversations with Staatsmänner und Diplomaten covering 1939 to 1941 (cue the importantissimi Hitler-Mannerheim recording); memoirs; and there is the official Third Reich collection of war speeches (not covering, for obvious reasons, the entire war) under the title Der großdeutsche Freiheitskampf. But the language escapes me . . .