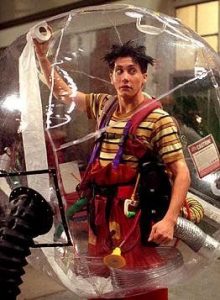 According to standard Left-wing boilerplate, White Nationalists like me don’t speak or write; we “spew.” We don’t “spew” ideas, arguments, and facts. We spew “hate.” This hate, moreover, does not spread from mind to mind because it rationally convinces people. Instead, its propagation is “virulent,” like Ebola. When a mind virus is spreading, one does not refute it by appeals to facts and arguments. Instead, you have to contain it. You have to quarantine the carriers, like me, so they can’t infect other people. In short, you need censorship.

The favorite instrument of the Left is the state. But because this is the United States, and we have the First Amendment, the Left can’t simply outlaw dissident ideas. Thus the American Left has grown to love capitalism, because capitalists don’t have to respect the First Amendment. The best sort of corporation, of course, is simply controlled by Leftists. That includes virtually every important media company of the last 100 years. But even where Leftists don’t own corporations, they have created politically correct terms of service and employment, which Social Justice Warriors and doxxers can use to get dissidents fired from their jobs or deplatformed from payment processors, webhosting companies, social media, and other necessary infrastructure for propagating ideas.

The solution to this problem is federal legislation forcing private companies to respect the First Amendment and to bar politically correct terms of service and employment. Until then, dissidents will have to hope that we can migrate from one platform to another, or assume new identities, while the Left plays whack a mole — and cuckservatives and libertarians piously declare that they can do nothing, because they believe in “free enterprise.”

Despite the impediments, however, I am fundamentally optimistic about our movement. Just look at Europe, where nationalist-populist ideas are surging, although none of these countries have the First Amendment. (Indeed, as a condition for joining NATO, the United States dictated that Eastern European governments adopt laws dealing with anti-Semitism and the Holocaust that would be struck down in the US for violating the First Amendment. A country would literally be disqualified from NATO if it wanted to adopt the US Constitution wholesale.)

The Left, moreover, is clearly in a panic. Of course, what we are seeing are mostly panicked attacks. But there are more and more panicked retreats, back to the two strongholds of the Left: academia and the legacy media. Long before Trump, it was apparent that wherever online comments were unmoderated, the Right was dominant. So the legacy media has increasingly resorted to comment censorship or abolished comments altogether.

Academia is even more insular, with their ever-intensifying diversity propaganda, increasingly shameless defenses of censorship, and crass attempts to keep dissident Rightist voices from speaking on campus.

This tendency was underscored in a small way when Jewish political theorist Ronald Beiner took note of my long and often highly complimentary review of his book Dangerous Minds: Nietzsche, Heidegger, and the Return of the Far Right.

I was disappointed that Beiner’s book actually does not even try to refute the Right. Instead, he simply takes for granted that our ideas are wrong. Indeed, his whole book was really directed at academic Leftists who like Nietzsche and Heidegger. Beiner merely trots out the contemporary Right to insinuate that Left-wing followers of Nietzsche and Heidegger are in bad company.

When Beiner responded to my review, I hoped that he might actually deal with my arguments. But no, he simply used by review as a pretext to flog his book to the readers of The Chronicle of Higher Education, where his response was published under the lurid title “When Neo-Nazis Love Your Book.” And to make sure that only fellow academics would read it, it was published behind a paywall. (You can read it here.)

It is increasingly clear that the establishment does not have the capacity to refute the intellectual case for the rising tide of populist nationalism. In the coming months, I will be illustrating this claim with reviews of a number of other recent attempts by Leftist and neoconservative intellectuals to understand and refute what we stand for. Academia is the establishment’s ideological immune system. Its function is to fend off the nationalist-populist virus, or the system will succumb. But the system has AIDS. Its immune system is gone. Hence the establishment retreat into the plastic bubble of censorship, brainwashing, paywalls, and general academic autism. We’re changing people’s minds, and they can’t change them back. Since ideas are the primary force that shapes history, that means their days are numbered. As Victor Hugo once said, “Mightier than the march of conquering armies is an idea whose time has come.”

Counter-Currents started our annual fundraiser on June 11th, our 8th anniversary of going online. Our goal this year is to raise $70,000. So far, we have received 49 donations totaling $7,223.94. So we are a bit more than one tenth of the way there. I want to thank all of our donors for their support.