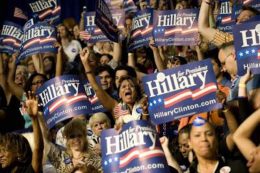 “You need to rethink everything.”

That was one of the strangest things a Hillary supporter told me during my months of door-to-door canvassing for Donald Trump. Everything? Not even alcoholics are told to rethink everything; they just need to rethink their drinking. For all that lady knew, I could have had a good job, a loving girlfriend, and an exciting life, but just had an unhealthy interest in Donald Trump. Is our country so partisan that we assume our opponents need to rethink everything? Maybe so. When I imagine a typical Hillary supporter, I suppose I imagine someone who is wrong about virtually everything.

Politics had gotten very personal, and plenty of people got mad at me just for knocking on their door. I canvassed in an affluent part of a major city — not exactly Trump country — so there was plenty of hostility, but yuppies and bourgeois bohemians are cowards, so no one ever threatened to beat me up. There was also a lot of Republican snobbishness. A number of registered Republicans told me that they planned to vote for the local Republican candidate for Congress and Hillary.

Aside from snotty comments, though, the worst part of canvassing was the weather. Sometimes you get sunburned and thirsty; sometimes you get drenched in rain and ruin your shoes in mud. Walking neighborhoods is not all fun.

I have two main observations about what it was like to stump for Donald Trump. First, it was not a good way to meet fellow dissidents. I suspect many readers have come to believe the Huffington Post/Mother Jones propaganda: that virtually all Trump supporters are racialists of one stripe or another. This is not even remotely true. The Republican voter base is overwhelmingly white, but its activists, at least in big cities, are not. The majority is certainly white, but I would guess twenty percent are not. I suspect that for non-whites, the decision to be a Republican is more deliberate than for whites; most are probably not just following the politics of their parents. It may be a difficult and even agonizing decision for them, and once they have made it, they act on it. Not only did I volunteer alongside blacks and Hispanics, I even volunteered with a Muslim named Mohammed.

Most of the volunteers were men. Many were retired, with time on their hands, but on weekends — when I canvassed — there were other young men like me. The women who volunteered were almost all retired, or least middle-aged. In my experience, not even one young woman — of any race — walked neighborhoods for Donald Trump.

If you’re wondering what we talked about, the answer is we didn’t talk. We were all there to work. Also, we knocked on doors separately, so I didn’t hear what kind of pitch the others made. When we did talk, it was over lunch, when we swapped stories about getting hopelessly lost in a strange neighborhood or about the crazy things people said to us that day. I never asked non-whites why they liked Mr. Trump, but all of them worked hard, and seemed nice enough. Perhaps one day we will have an implicitly pro-white nationalist party with steady — if limited — support from a dedicated cadre of Chicanos.

My second observation was that the thinking of liberals was genuinely hard to fathom. Let me give you an example. I picked doors to knock on from a list of addresses of people who were registered voters who were either independents, or who had “frequently but not exclusively” voted for one party or the other. In West Virginia or Pennsylvania, that generally meant people who supported Bernie Sanders but might have voted for Mr. Trump. In the kind of wealthy urban area I was in, it often meant people who might have voted for John Kasich or Marco Rubio over Bernie Sanders, but prefer Hillary Clinton to Donald Trump.

In this environment, those who are “frequently but not exclusively” Democrats were the toughest customers. One woman stands out. She was very surprised to have me on her doorstep at all, and said I was the first Trump supporter she had ever met. She asked me to explain myself. I picked a policy I thought would appeal to a liberal and told her that one of the things I like about Mr. Trump is his opposition to the stupid wars America keeps fighting and losing.

The woman promptly told me that Mrs. Clinton had expressed regret for her role in launching the Iraq invasion. I told her regret was not good enough for a mistake that big, and that Mrs. Clinton had never expressed regret for the hundreds of thousands of Iraqi civilians that America’s economic sanctions killed in the 1990s [2]. When Bill Clinton’s Secretary of State, Madeline Albright, was asked if those deaths were justified, she coldly said that they were [3]. The sanctions didn’t topple the Hussein regime, which ended only when the US invaded. If Hillary admitted the invasion was a mistake, how could she justify the sanctions?

The woman said that if Mrs. Clinton had been more anti-war, the rampantly sexist media would have portrayed her as weak and afraid of war. She added that Mrs. Clinton had to sound aggressive to counter that sexism. The woman then asked why I thought Mr. Trump hadn’t released his tax returns yet.

We talked for quite a while, and covered most of the contentious issues of the campaign. I tried to focus on other Trump issues that might appeal to someone on the Left, such as his protectionism and his opposition to NAFTA and TPP. I pointed out that even Left-wing intellectuals such as Chris Hedges [4] and Noam Chomsky [5] have condemned NAFTA. She looked at me thoughtfully and asked, “Where do you think Obama was born?”

I could see I would never convince her, so instead of answering, I asked if I could have some water. This woman didn’t agree with me, but she was nice, and I was thirsty. It also seemed like a neutral way of ending a futile conversation, and moving on to the next house. She laughed and said, “Of course, I’ve kept you long enough. Come on into my hippie house.” I took a drink, thanked her, and left, but “hippie house” stuck in my mind. It was a joke, but it was also her way of saying that despite our disagreements, I could come inside, even if her house was a nest of Left-wing idealism.

I think there was more than that to the joke. Hippies are outsiders who reject social norms. When I was young I visited several hippie houses. They were filthy, and too many people lived in them. Any time of day, you could always find someone asleep on one of the dirty mattresses on the floor. People are always coming and going, music is always playing, and someone is always getting high. Hippies, almost by definition, are poor, and barely get by in hippie-friendly jobs such as delivering flowers by bicycle or working in a vegetarian restaurant.

That woman was no hippie. Her house must have been worth at least $750,000. Two nice cars sat in the driveway. Inside there were hardwood floors and nice furniture. Whatever fields she and her husband were working in, they certainly were not hippie-friendly.

The woman was an insider, a beneficiary of the current regime. She didn’t care about the people who were losing out, whether they are Iraqi children or working-class Kansans. Both groups are just grist for the mill of global liberal elitism. Why did she call herself a hippie? I think it was because it’s fashionable. Hippies are outsiders, and outsiders are cool. Hillary Clinton herself thinks the same way. She is many times a millionaire and has been a government insider since 1993, but claimed [6] she “cannot imagine anyone being more of an outsider than the first woman President.” In college I met tenured professors with guaranteed, lifelong jobs who considered themselves rebels.

Knocking on doors for Mr. Trump was a good reminder of how commonplace this bizarre Left-wing identification is. I worked as hard as I could, for no payment, for a campaign that was uniformly condemned by the establishments of both political parties, nearly the entire media, and every university, but wealthy homeowners still treated me as if I were part of “the system” trying to curb their free spirits.

We dissidents have to find a way to unmask the power and privilege of our elites. So long as liberal journalists, academics, and bureaucrats can claim they are hip agents of change in a world run by conservative Baptist oligarchs, they will keep tricking many actual outsiders into joining their side.