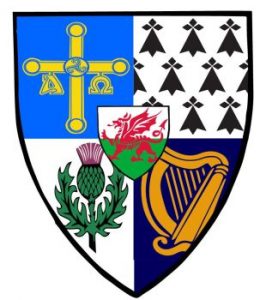 We are the last people on earth, and the last to be free: our very remoteness in a land known only to rumour has protected us up till this day. Today the furthest bounds of Britain lie open – and everything unknown is given an inflated worth. But now there is no people beyond us, nothing but tides and rocks . . .

In a small medieval town, untouched by time, lost amidst the rolling green hills and prickly thorn thickets of the Cambrian countryside, pennants and flags are strung between the Tudor eaves of an oak-timbered inn and the thatched roof of a thousand-year-old Norman market hall. The Gwenn-ha-du of Brittany; the tridhathach na hErieann from Ireland; the Saint Piran banner from Cornwall; the Saltire of Saint Andrew for Scotland; the Brattagh Vannin of the Isle of Man; and the Y Ddraig Goch representing Wales, are all brightly reflected in the sparkling sash windows of houses thrown open to welcome gregarious festival-goers drinking real ale from raised tankards that glint in the smouldering dragon’s breath of a blistering midday Sun.

Meandering crowds of revellers fill narrow, cobbled streets, overlooked by violet wisteria that hangs from the ash beams and the lime-washed facades of thirteenth-century homes. Weathered doorways echo with the rhythmic reels of clog dancers and the melancholic melodies of a harp, clashing incongruously with the almost discordant burr of the hurdy-gurdy and the thrum of well-thumbed beaters bouncing on the tightly-stretched leather skins of battle-shield-sized bodhrans. It is the sort of merriment W. B. Yeats encapsulated in his poem, “The Stolen Child”:

We foot it all the night,
Weaving olden dances,
Mingling hands and mingling glances
Till the moon has taken flight;
To and fro we leap
And chase the frothy bubbles . . .

In the background, the familiar “ba” of Beulah speckle-faced sheep and the bleating of British Landrace goats intermingles with the Breton, Gaelic, Manx, and Cornish dialects of guests from as far afield as Locronan in Brittany, Launceston in Cornwall, Elgin in Scotland, Adare in Ireland, and Castletown in the Isle of Man. These are the progeny of tribespeople who lived and worshipped in the pagan groves and rock-carved temples of Gavrinis in the Gulf of Morbihan, the Meayll Circle on the Isle of Man, the Callanish stones at Lewis in Scotland, the five-and-a-half-thousand-year-old tomb at Bru na Boinne in Ireland, the Boscawen stone Circle near Burystan in Cornwall, and the Barclodiad Y Gawres burial site near the royal palace of Aberffraw on the southern coast of Anglesey, or Mona, as it is was once called.

There are excited people bartering over Love Spoons and the myriad of grey-slate handcrafted trinkets that the stallholders have on display, a veritable cornucopia of regional traditions and folk memory grafted into their very DNA. There is a positive feeling of a unifying identity infusing the carnival day.

So, when I look northwest to the blue-tinged horizon of the Preseli hills and then turn my head to gaze towards the southwest, beyond the Avon Gorge to the three hundred square miles of the Salisbury Plain chalk plateau, I am truly secure in the knowledge that it was my Neolithic, Mesolithic, and Palaeolithic ancestors – people who share both my own and a slither of Neanderthal genes – that built Stonehenge, and traded and mated with adventurers like the four thousand-year-old Amesbury archer who originated in the Alpine region of Central Europe; the Iberian Neolithic farmers and seafarers that migrated along the Atlantic coastline from Spain to Ireland; the Silurian ice-walkers who trekked to North America during the last ice age; tribes like the Dumnonni, Cornovii, Dobunni, Belgae, and the Atrebrates; the Roman Legio X Gemina and Legio VII Claudia soldiers who crossed the English Channel; the Posse Comitatus war bands of the flaxen-haired Anglo-Saxons; the chattering sons and daughters of Viking merchants in the markets of Jorvik; William’s charging cavalry at Hastings; and the entrepreneurial Flemish wool-weavers that developed “Little England” in ports like Tenby all along the crenelated Pembrokeshire coast.

This was a rich and diverse blending of congruent cultures and high-end human biological material that forged both an organic and unique civilization that is recognizable the world over, and has been celebrated in the form of ceilis, or ceilidhs – literally gatherings – and Eisteddfods, following in the lineage of Beltane and Samhain, for centuries. The classic mythological collections of the Mabinogion of Wales, the Tain Bo Cuailnge of Ireland, and the Lais of Marie de France of Brittany gave birth to literary giants like Francois-Rene de Chateaubriand (1768-1848), the author of Genie du Christianisme (1802); Louis Tiercelin (1849-1915), a writer, poet, and playwright associated with the Breton renaissance of the early twentieth century; Alan Heussaff (1921-1999), one of the founders of the Celtic League in 1961 and publisher of the Geriadur Brezhoneg (1995), a definitive dictionary of the Breton language; the Cornish writer and philosopher of the new existentialism, Colin Wilson (1931-2013); the Bards of the Gorseth Kernow like Robert Victor Walling (1895-1976), who was a soldier, poet, and journalist; Welsh rhymers like Dafydd ap Gwilym (1320-1350), and the fire and brimstone homilies of R. S. Thomas (1913-2000); Scottish novelists like George MacDonald (1824-1925), who wrote The Princess and the Curdie (1883); Kenneth Grahame (1859-1932), author of the children’s classic The Wind in the Willows(1908); and modern Irish writers like Brian Moore (1921-1999), who penned the gripping Black Robe (1985).

This was a race of headhunting warriors who painted themselves blue and orange and wore glamorous torcs around their necks, riding chariots towards their enemy’s battle lines to launch javelins at their foes. They were fighters who were unrivalled in small-unit formations. Inspired by battle songs like “Armyes prydaian,” the war song of Gaul Mac Morn and the Coronach, their descendants won battle honors across the length and breadth of the world-consuming British Empire whilst their cousins, the Scotch-Irish in America, stood toe-to-toe with the scalping Abenaki, Huron, and Iroquois in the Mohawk Valley, Adirondack Mountains, and Lake Champlain. Proving themselves worthy of their hardy forebears by pushing west through the Cumberland Gap, they cleared the land and established log homesteads from Kentucky to the inhospitable Appalachians and the Canadian boreal. They built nations while burying their babies in what was once a wilderness of wood, snow, and ice.

And believe me, these lovers of feasts and dancing are undergoing another resurgence, both culturally and psychologically. Despite the setbacks they have endured and the traitorous political cliques that have ensconced themselves in Cardiff, Dublin, Edinburgh, and Paris, a groundswell of confidence is increasingly on display when they perform their jigs in 6/8 and polka steps to the sound of the hornpipe and the Strathspey. Communal traits and long-discarded tribal instincts are being reawakened so that these former worshippers of trees like the gorse, associated with love and fertility; the purple and white heather, symbolizing intelligence; and the mistletoe favored by their former spiritual leaders, the druids, are now – like their Catalan, Quebecois, and Basque brethren – once again reevaluating their roles in the world and the part they must play in shaping its future.

This is a far cry from the dissipation and nihilism I felt when I was young, dancing on the roof of a car in the back alleys of a run-down town, swigging homemade cider from a local farm under twinkling starlight and kissing a brown-eyed girl in a grim, mine-scarred valley, where, as Springsteen sings in “The River,” “they bring you up to do like your daddy done.”

A new Celtic dawn is rising. The dragon has awoken. It is time to eschew the small-nation syndrome of the current Scottish National Party and the Welsh nationalists of Plaid Cymru, who trade on divisive anti-English sentiments, and instead begin to embrace – at least in part – the more inclusive philosophy of the Breton thinker Yann Fouéré, who popularized the idea of a “Europe of One Hundred Flags.” His notion was to establish a federal Europe based on the full recognition of the rights and aspirations of homogenous native populations with distinct regional cultural variations by way of a sort of “divide to unite” mechanism that would allow the Continent to “decentralize inwardly and federate outwardly.”

This is the sort of process that the Brexit debate has initiated, disbanding the current European Union and instead tending towards the worldview espoused by people like the Welshman Saunders Lewis (1893-1985), a radical conservative of the Catholic religious persuasion and one of the founders of the Welsh national party, Plaid Genedlaethol Cymru, in 1925, who clearly recognized the significance of a Pan-European movement built on strong and sustainable regional identities, saying that “[c]ivilization is more than an abstraction. It must have a local habitation and name. Here its name is Wales.”

This was a sentiment that was later to be taken up and further developed by Francis Parker Yockey (1917-1960), who through his European Liberation Front advanced the notion of a united white world, shorn of internecine squabbling and operating under the umbrella of an Imperium Mundi. This was an ideal that the Belgian national revolutionary Jean Thiriart; Marco Battara, the Italian editor of the red/brown journal Orion in Milan; Juan Antonio Llopart, a Spaniard involved with Alternativa Europa; and the Pan-European theorist and activist Dr. Christian Bouchet, founder of the Front Europeen de Liberation (FEL), would have wholeheartedly supported.

Therefore I beseech my Celtic kinfolk to greet visitors with an open heart, a warm hearth, and freshly-baked bread, but to prepare to repel invaders with well-crafted arrows and a blade recently wetted on a freshly-turned grindstone. As the Welsh poet, the Laugharne lyricist Dylan Thomas, said, “Do not go gentle into that good night” – or as some would wish, dreamily drift away into the Celtic Twilight – but stand and “rage against the dying of the light.”

Every inch of this land and the soil of our kinfolk should be precious to us: the sacred forests of oak, alder, ash, birch, blackthorn, elderberry, and hawthorn; the ground-elder and Rosebay Willowherb ecosystem that supports colonies of marsh harrier, song thrush, and the red-billed chough; the age-old lakes of the Pay de Fougeres in the Breton heartland; the deep, dark lochs of the Scottish Highlands; and the shrines of the early Celtic Christian saints like Saint Gastyn in rural Wales and Saint Anne, the patroness of Brittany. These are not ours to sacrifice on a McDonald’s-like altar to modernity, but an inheritance we should treasure and preserve in the same way we must care for the pale-skinned blonde, brunette, brown, and flame red-haired children in our kindergartens. Long may they sing Christmas carols in snow-topped chapels and march in blazers and tartan skirts with cockaded berets in commemoration of their forefathers under multifarious banners in village parades, from Ballyferriter on the far western coast of Ireland to Inverness in the north of Scotland, and from Douglas on the Isle of Man to Vannes in the east of Brittany. For these are our ways in our lands and long may it stay that way.

Offspring of the Chiefs
Of snorting steeds, high bounding!
King of spears!
Strong arm in every trial!
Ambitious hear, without dismay.
Chief of the host of severe sharp weapons,
Cut down to death,
So that no white sailed bark
May float round dark Innistore.
Like the destroying thunder
Be thy stroke, O hero!
Thy forward eye like the flaming bolt,
As the firm rock,
Unwavering be thy heart,
As the flame of night be thy sword.
Uplift thy shield
Of the hue of blood.
As an offspring of the Chiefs
Of snorting steeds,
Cut down thy foes to earth.

–From the Fourth Book of Fingal (translated by Macpherson)