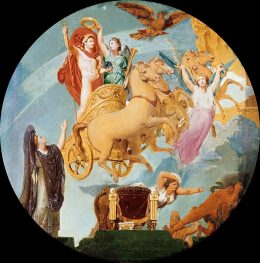 It’s that time of year. The French dictionaries Le Petit Larousse and Le Petit Robert (don’t ask me why they are called “petit,” they are huge) are adding various neologisms and foreign loanwords to our beloved langue de Céline.

My interest was particularly piqued by the following new entry:

noun, feminine (from democracy and dictatorship).

1. A political regime which, while having certain attributes of democracy, such as party pluralism, is nonetheless run in an authoritarian or even dictatorial fashion. (One also says dictocratie.)

2. The shift from democracy to dictatorship by undermining the rule of law.

How interesting! The word clearly refers to the various elected “populist” regimes which have emerged in Hungary, Poland, and the United States, which for various reasons, do not live up to liberals’ ever-changing definition of “democracy” and “the rule of law,” according to their latest ideological fashions.

What Le Petit Larousse fail to mention, however, is that the word actually goes much farther back, at least as far back as the 1930s: indeed, various fascist movements and thinkers deemed the Western parliamentary democracies to be in fact démocratures, as actually being run not by the people, but by warmongering and corrupt liberal and oligarchic elites. Given the pervasiveness of antiwar sentiment, if the people ran America or France, as these republics boldly claimed, it seems quite unlikely that either country would have gone to war against Germany, effectively on the side of the Soviet Union.

[S]uch men regarded parliamentary democracy as a sham “democratatorship” [sic] (Demokratur), believed the multi-party system had to be abolished and wanted somehow to reunify the country with the assistance of like-minded fascists abroad.[1]

What, in fact, is a liberal democracy? You will never find agreement as the two terms are in hopeless contradiction with one another. One man’s legitimate, majoritarian expression of the popular will is another man’s demagogic tyranny of the majority. To one man, the executive’s, media’s, and judges’ ignoring of public opinion will be an example of far-sighted, responsible, and enlightened leadership, while appearing to another man to be an abhorrent betrayal of democracy by oligarchic elites.

Recall: two World Wars were fought by the Western powers, tearing Europe apart in murderous conflicts from which the continent has never recovered, in the name of preserving liberal democracy. The religion of democracy excommunicates from respectable humanity all governments which are not liberal democracies. And yet, the very definition of the term is quite unclear, shifting, and ambiguous according to liberal elites’ changing moods and interests. All this is quite problematic.

In fact, all human societies are authoritarian and (civil-)religious. All societies, and their media-political elites, shun, demonize, and destroy those considered to have wrong values, lest they infect the rest of society. All societies have punishable taboos. Purging a university professor or screenwriter for his fascist or racialist views is not less “authoritarian” than purging one for his communist views. Therefore the distinction drawn by liberals and the Left in general, made popular in the 1960s by the Frankfurt School and others, is quite spurious and hypocritical. All societies have Platonic Guardians, whether they own up their role, or not.

This was not so apparent in the postwar years however. For the Boomers, bless them, one could live in a society which was, in fact, carefully policed by the audiovisual and print media, but which could claim to be “open,” “tolerant,” “pluralist,” characterized by “freedom of thought,” etc., all the while never being allowed to give a fair hearing any taboo Right-wing idea. One could have the pleasure of both thinking oneself open-minded and have the benefits of actually being authoritarian.

With the rise of national-populism, which signifies, for the first time in decades, a certain loss of control of the political process by mainstream media elites, the mainstreamers are waking up to démocrature. More and more are openly questioning democracy and elections, as leading to “instability,” “populism,” and above all, “wrong values.” Careful now, you might become Right-wingers!