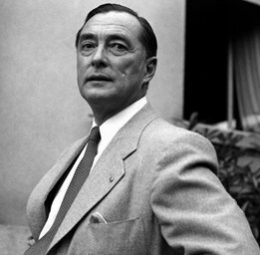 The facts of history are invariably more paradoxical and interesting than the retrospective mythology that comes afterwards. Browsing an excellent collection of Julius Evola’s essays, I came across an astonishing interview which the Baron held with his fellow aristocrat, the long-time “European federalist” Count Richard von Coudenhove-Kalergi.[1] [2] In this May 1933 interview, the spiritual godfather of the European Union expressed his full support for Italian Fascism and suggests that a federal Europe could be established on the Fascist model.

I will go over this interview and its historical context,[2] [3] as I believe it is highly instructive for understanding the great rendezvous manqué between fascism and European unity, scuttled by excessive Hitlerian racial notions, as well as national chauvinism on all sides. While official remembrance prefers to omit this fact, the reality is that many fascists were imbued with a pan-European ethos, such as Robert Brasillach, Oswald Mosely, or Léon Degrelle. I will then also go over some aspects of Hitler’s, in some respects quite cogent, critique of Pan-Europe.

In this highly cordial interview, Kalergi praised Mussolinian Italy’s domestic arrangements, but said her greatest contribution could yet be towards a united Europe: “Among the various nations, Fascist Italy is the one which has given the great contribution to the solution of the [constitutional reform problem and the social problem]. Italy has already surpassed the problem of constitutional reform. It has given the necessary elements for the solution of . . . the social problem. It is destined to effectively confront the third and greatest problem, the European problem.”[3] [4] Kalergi argued that the Fascist constitution’s blend of aristocratic and democratic elements made it a suitable model for a European federation:

The Fascist constitution could have a value that is more than purely Italian, but could be more generally European insofar as it expresses a wise mixture of the authoritarian aristocratic principle with what can be healthy in the democratic principle. It concedes room to justice and the enlightened command of superior personalities, and at the same time gives a solid base to the principle of identity, free adherence, and cooperation, by disciplining every power in the name of the higher idea of the nation. The European soul, as I conceive it, is characterized by three fundamental components: heroism, personality, and sociality. Since the Fascist solution includes all three in a wise equilibrium, so it presents itself as the most suitable one for assuming a character of European universality.[4] [5]

More specifically still, Kalergi suggested the possibility of a Fascist-style “future European corporative assembly, intended to study the most vital technical problems that are posed to the complex economy of our continent from a totalitarian point of view, and without restraint.”[5] [6]

When asked whether Kalergi’s pacifism was “anti-virile” and rejected all war, or merely rejected intra-European conflict, Evola paraphrases: “He reminds us how often he has invoked internal European peace only because it is childish to persist in reciprocally paralyzing the economic and military forces of the various European states, because a European defensive unity is necessary and salutary in the face of the three greatest anti-European powers: Russia, Asia, and America – and perhaps even an offensive one, as well.”[6] [7]

Kalergi praised the Fascist regime for – unlike either the bourgeois democracies or Bolshevism – seeking to emancipate politics from economics. He affirmed that Italy’s stable non-democratic regime made her particularly suited to reforming Europe on the basis of a Franco-Italian axis and parity between Latin and Germanic Europe: “Because of its independence from the contingencies and crises of parliamentary regimes, Italy is today the nation that is most suited to conduct a far-sighted international politics.”[7] [8] He furthermore praised the Duce specifically: “This feeling for the right moment, joined to a Latin sense of equilibrium, is one of the most outstanding gifts of Mussolini’s genius.”[8] [9]

It is my firm conviction concerning Fascism’s super-national mission that has brought me to Rome . . . And I sincerely hope that the new Italy will remain faithful to its great tradition, working with every means at its disposal for this European idea, which had already been formulated by Dante, actualized spiritually by the Church of Rome, and realized militarily by the Italian Napoleon, and finally renewed in a more modern way by the Mazzinian myth of the “New Europe.”[9] [10]

This interview was not an isolated incident in Kalergi’s career. He would meet several times with Mussolini between 1933 and 1936. In 1933, he wrote that his Pan-European Movement was neutral between democracy and Fascism, and that governments should be judged by their “position concerning the European idea and not from the perspective of their domestic politics.”[10] [11] He argued furthermore: “We cannot wait for the realization of Pan-Europe until all of Europe has turned uniformly Fascist or democratic: since this would delay Europe’s merging for decades to come. . . . In this sense, the Pan-European movement is neither Fascist nor anti-Fascist, neither democratic nor undemocratic.”[11] [12]

Kalergi would later argue that he courted Fascist Italy so as to counter the Third Reich. However, there were also elitist and anti-Communist ideological affinities between him and Mussolini. Kalergi insisted as much in 1933: “The fascist opponents of Pan-Europe have often tried to identify the Pan-European Movement with the democratic ideology. This attempt however is destined to fail, if only for the reason that my philosophical ideas are not democratic, but always aristocratic.”[12] [13]

As an aristocrat hailing from a fallen multinational empire replaced by nationalist (and often populist) statelets, Kalergi’s “Pan-Europeanism” was a complex and mixed ideology. He shared elitist, spiritual, and anti-Communist ideas with the German Conservative Revolution, while also being anti-nationalist, pacifist, and Judeophilic. His practical proposals for a united Europe were furthermore not without merit, arguing for an enormous Swiss-style confederation, characterized by local government, a rotating presidency, and a federal army and foreign policy. While Kalergi ultimately threw in his lot with parliamentary democracy, his ultimate preferences appear to have been for an “aristocratic globalism.”

Kalergi was heavily demonized in the Third Reich, and ethnonationalists to this day denounce the so-called “Kalergi Plan” which he allegedly promoted to destroy the white race of Europe through mass immigration. Kalergi notoriously predicted in his 1925 book, Practical Idealism:

Man will be hybrid in the distant future. Today’s races and castes are increasingly falling victim to the fact that space, time and prejudice are being overcome. The Eurasian-Negroid race of the future, outwardly similar to the ancient Egyptian, will replace the diversity of peoples with a variety of personalities.[13] [14]

This prediction, which Kalergi no doubt welcomed, is of course not the same as a plan. Formerly a Mason, married to a Jewess, and with ancestry from opposite ends of Eurasia, Kalergi’s personal life was perfectly in tune with the pacifist, cosmopolitan, and remarkably Judeophilic aspects of his politics. In Practical Idealism, Kalergi had argued that centuries of oppression had bred the Jews into a superior people, “the leader-nation of the future” and “Europe’s spiritual nobility.” The Pan-European Movement received support from, among others, Louis Rothschild, Max Warburg, and Robert Bosch.[14] [15]

Hitler unsurprisingly had utter contempt for Kalergi. For the National Socialists, Kalergi’s seductive “Pan-Europe” meant, in practice, national moral paralysis by acquiescing to the impotent palaver of international organizations, leading in effect to subordination to nation-wrecking international forces. Hitler forthrightly believed that great states could not be founded without war, writing in his unpublished Second Book on foreign policy:

We know from past experience that lasting unions can only take place when the peoples in question are of equal racial quality and related, and second, when their union takes place in the shape of the slow process of a struggle for hegemony.[15] [16]

He cited the examples of Rome, the British Empire, and Prussia’s founding of the Second Reich, and argued that centuries of struggle would be necessary to unite Europe politically, linguistically, and racially. Indeed, Germany herself had been united, not by the eloquent lawyers in the Frankfurt Parliament, but by Bismarck’s proverbial “blood and iron” on the battlefield. Hitler argued that Kalergi’s path would mean only European impotence:

[T]he attempt to realize the pan-European idea through a purely formal union of European peoples, without being brought by force in centuries-long battles by a European supreme power, will lead to an entity whose entire strength and energy will be absorbed by internal rivalries and conflicts – as happened once with the strength of the German tribes in the German Confederation. Not until the internal German question was ultimately solved by Prussian superiority could the nation exert its united strength outward.[16] [17]

He incidentally also thought that the United States enjoyed a higher Nordic-Germanic racial quality than Europe as a whole, and thus would be able to dominate any putative European federation. Contrary to the claims of “the biggest bastard in the world, Coudenhove,” this “pacifist, democratic, pan-European muddled state” would not be able to stand up to “the American Union or a nationally-awakened China.”[17] [18]

The latter judgment certainly seems perfectly realistic and far-sighted given the perpetual crises and relative impotence of today’s European Union, after seventy years of steady “integration.” At the same time, though EU integration has largely failed to create a great power, one would have to concede to Kalergi and the mainstream integrationists that they have succeeded in reducing conflict among West-European nations, partially through the creation of a community of interest through economic interdependence.

[T]he pan-European movement rests from the beginning on the fundamental basic mistake that quality of population can be made up for with quantity of population. This is a purely mechanical view of history that completely avoids exploring the forces that shape life; instead, it sees numerical majorities not only as the creative sources of human culture but also as the history-forming factors. This view fits as well with the pointlessness of our western democracy as with the cowardly pacifism of our leading business circles. It is obvious that this is the ideal of all inferior or half-breed bastards. Likewise, that the Jew particularly welcomes such a concept, in its consistent observance leads to racial chaos and confusion, to a bastardization and niggerization of civilized humanity, and finally to such a deterioration in its racial value that the Hebrew who keeps himself free from it can gradually rise to be masters of the world. At least he imagines that he can one day become the brain of this humanity that has been made worthless.[18] [19]

There are two political ideas of a united Europe: that which defends her peoples as an ethnic, cultural, and genetic reality, and that which sees Europe merely as a way of eliminating the nation-state and as a stepping stone to global unity, announcing a universal mixing would mean the abolition of Europe.

[10] [30] Quoted in Katiana Orluc, “Caught between Past and Future: The Idea of Pan-Europe in the Interwar Years,” in Hans-Åke Persson & Bo Stråth, Reflections on Europe: Defining Political Order in Time and Space (Brussels: Éditions scientifiques internationales, 2007), p. 112. Compare with Charles Lindbergh in October 1939 [31]: “Our bond with Europe is a bond of race and not of political ideology. It is the European race we must preserve, political progress will follow. Racial strength is vital, politics a luxury.”

[13] [34] Unfortunately, there appears to be no complete English translation of this work. A partial translation is available here [35].

[16] [38] Ibid., p. 116. Interestingly, in a 1953 article in Le Monde, Kalergi argued for a federal rather than confederal Europe: “the transition from a confederal to a federal system only occurred, in Switzerland as in Germany, following separatist movements, followed by civil wars (1848 and 1866).” Richard Coudenhove-Kalergi, “Confédération ou fédération?,” Le Monde, January 20, 1953. One could point out that the United States, though founded as a weak federal republic, only overcame divided sovereignty between federal and state governments through a terrible civil war.